Kansas City Chiefs fans of yesteryear would have never believed there'd be at least five decades between Super Bowl appearances. Countless football memories have been recorded since then, some of which have been hard for Kansas City fans.

For one family from Blue Springs, a precious football recollection began with a family photo in 1970. Shannon Liptak was 5 months old at the time, and barely able to sit up on her own. 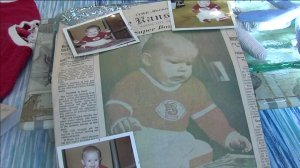 "I had a little onesie that had the Chiefs on it. He thought it would be a great story for the Kansas City Star. He wrote to them and they sent out a reporter, and they came out and took my picture," Liptak smiled.

The family kept the red and gold terry cloth onesie Shannon wore that day, as the Chiefs prepared for Super Bowl IV, which the franchise won over the Minnesota Vikings.

"She got a bunch of cards and letters from people we didn't even know, even some people sent her a little bit of money," DiGeorge said.

Sadly, Phillip DiGeorge passed away in 2011, but his loved ones, including the little girl in that newspaper photo, believe he'd love the modern day Chiefs, who are one win away from finally returning to the Super Bowl.

When that celebration begins, this now grown-up Chiefs fan might lead the procession.

KU and MU postpone commencement due to coronavirus pandemic

KANSAS CITY, Mo. — Andy Reid is like most people these days. The Kansas City Chiefs coach is hunkered down in his basement, trying to avoid going out in public as he works from a makeshift office consisting of a computer, an iPad and an old side table. The difference, though: He's trying to build a team that can defend a Super Bowl title. It's hard enough when things are…

PHILADELPHIA -- A Pennsylvania-based artist is paying tribute to the Chiefs' Super Bowl victory and 60th anniversary with a picture using the name of every player who was ever on the team.

The picture shows the inside of Arrowhead stadium, including fans, a field and even some puffy white clouds. Everything is made out of letters.

KANSAS CITY, Mo. —  The Chiefs are reportedly re-signing wide receiver Demarcus Robinson to a one-year deal according to Tom Pelissero of the NFL Network.

Robinson had 32 catches for 449 yards and four touchdowns in 2019, and had eight receptions for 119 yards and a touchdown in the Chiefs four postseason games.