COLUMBIA, Mo. — Amid a cacophony of construction cranes and earth-movers, the $100 million facelift of Memorial Stadium in Columbia is taking shape. 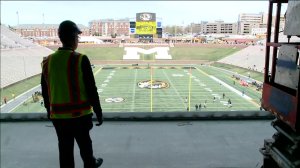 “They’ll walk down through the Bunker Club and go out through here as they run on the field,” Joos said, pointing to an open area leading onto Faurot Field.

No doubt, the south end zone’s futuristic facelift is meant to be a recruiting tool to grab the best players in the country. Mizzou really has no choice if it wants to compete with powerhouse programs in the SEC like Alabama, Texas A&M and LSU.

“We’re next to last in the SEC in operating dollars,” Joos said. “So we had to generate new sources of revenue, and we believe this building is a piece of that as we continue to move forward.”

Thanks to donors, the new south end zone structure is three stories tall, encompassing approximately 200,000 square feet of swankiness. That will allow deep-pocketed Missouri backers to show up and show out. 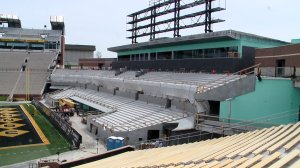 The concrete, scaffolding, wooden beams and equipment fanned out near Faurot Field may not illicit visions of grandeur right now, but the Missouri Athletics Department wants fans to know the future is definitely now.

A computer animation of the finished product gives football fans a glimpse of what will greet them this fall. Check out the video player above to see the animation MU shared with us.

“A new south end zone to strengthen his traditions from the past into the future,” the athletic department’s preview video says.

Sleek meeting rooms are only the start for the football team.

The coaches will have more room to maneuver with new offices facing the field giving them the ability to walk outside and oversee the action.

“The ultimate end zone party. The Bunker Club is your chance to high five the team as they hit the field,” the video says. 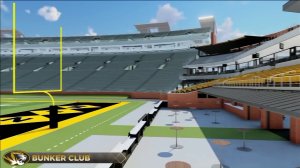 The Bunker Club will offer ground level sight lines to watch games similar to what the Dallas Cowboys offer at AT&T Stadium.

The uber-sheek Show Me Club, the largest fan club in the state, boasts indoor club seating for 1,250 people. New video boards and walkways will connect the south side of the stadium to the west side to enhance the game day experience.

“The new Faurot Field, home of champions, the best the Show Me State has to offer, a place to cheer, to celebrate, to win,” the video says.

Phase One of the project for the players is expected to be finished by Memorial Day. Completion of the south end zone facility is expected prior to Aug. 31.

The NCAA men's and women's basketball season will begin Nov. 25, the day before Thanksgiving.

The Division I Council voted Wednesday to push the start date back from the originally scheduled Nov. 10 as one of several precautions against the spread of coronavirus.

All 12 Playbook: Ready for football? Who to watch as Big 12 teams kick off season openers

OKLAHOMA CITY (KFOR) - The 2020 Big 12 football season gets started this weekend, and All 12 Playbook will be your weekly source for all the latest on the conference teams as they navigate throughthe difficulties of the pandemic and strive to keep their championship hopes alive.

Some Missouri lawmakers want another special session, this time on COVID-19 liability