The team said this is the first of its kind in a professional stadium in the United States.

Before the park had a SubAir heating and cooling system. A spokesman for the park said this is a new electric field heating system.

They said the full project scope includes adding grow lights, underground electrical field heat, synthetic turf outside of the touchlines, and new sod. The entire scope of the project will be completed in advance of their first match of the season against Toluca in the Champions League on February 21.

“While we feel there are many advantages to the electrical system instead of a “glycol” heating system, the main points are consistent heat across all areas, precision temperature control, instant on/off and efficient zoning of areas that need heat.”

Sporting KC said this is a major construction project that started the day after the Western Conference Championship game on Nov. 29, 2018 and will continue well into February.

“We will be the first professional stadium in the U.S. to have this electrical heating system. We feel that the total investment/scope of the project will make Children’s Mercy Park one of the most desired playing fields across all sports leagues in America regardless of season.”

Sporting KC finished the 2018 season 12-2-5 at Children’s Mercy Park, losing just three times in 48 matches across all competitions in one of the toughest venues in all of Major League Soccer. They failed to advance to the MLS Cup last year after losing to Portland.

On Monday, the team released its 2019 MLS regular season schedule.

The team’s home opener is scheduled for Sunday March 10 against Philadelphia Union.

Single game tickets for the first eight home matches at Children’s Mercy Park will go on sale to the general public Thursday, Jan. 10 at 10 a.m. 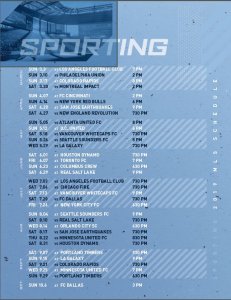 Massachusetts Street in Lawrence is packed on game days. But that may not be the case this year.

KANSAS CITY, Mo. — The world is in the grips of the worst pandemic in more than a century, the country is going through the kind of social upheaval unseen in decades, and the vast majority of people would prefer 2020 just grind to an end.

Patrick Mahomes might be having the best year of anyone.