When they do, one of Kansas’ top up-and-coming receivers won’t be in uniform. His family said the reasons behind that inactivity are unfair.

Making connections has never been a problem for football star Mekhi Miller who, as a freshman, caught seven for the varsity team at Topeka High School last season. 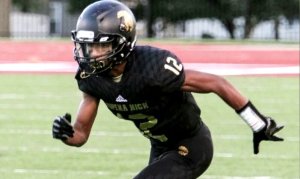 However, Mekhi’s transfer from Topeka High to Overland Park’s Blue Valley North High School didn’t go over well with everyone.

In September, athletic directors at THS filed a complaint with the Kansas State High School Activities Association, complaining that Miller had transferred after being recruited away by Blue Valley North, which would be a violation of KSHSAA rules.

“I try not to think about it because it’s just going to build up anger,” Mekhi Miller said.

Greg Miller denies that his son was recruited. The elder Miller said he and Mekhi’s mother separated in January, and Mekhi’s behavior and grades began to suffer afterward.

Then Mekhi followed his father to Overland Park after his dad took a new job as a real estate salesperson in Johnson County.

“They submitted information saying my son was being recruited, which was a thousand percent false,” Greg Miller said.

In September, a KSHSAA appeals board upheld Topeka High’s complaint. A statement from Topeka Public Schools to FOX4 said the school was merely following KSHSAA rules and guidelines.

“I don`t see why you would hold back a 15- or 16-year-old kid from playing the sport they love,” Mekhi Miller said Monday.

“It hurts because I know how hard he`s worked for this moment,” Greg Miller said.

Greg Miller has begun serving as a volunteer assistant coach at Blue Valley North High. Mekhi will regain his eligibility to play football at BVN next season. For now, he’s permitted to practice with the team.

But as for his student life and football future, it isn’t the same. He said that’s what feels most unfair to him.

Under current KSHSAA guidelines, athletes who transfer, as Miller did, are considered ineligible to play football for six months. In September, Kansas’ governing body changed that “sitting out period” to a full year, which will take effect next season.

BLUE SPRINGS, Mo. -- Some high schools sporting events in Missouri are back, after the coronavirus forced district leaders to suspend sports last spring.

"This has definitely been a different experience for us with COVID," Blue Springs South volleyball coach, Mallori Perry said.

KANSAS CITY, Mo. — We're back for another edition of FOX4 Hy-Vee Game Night, covering high school football around the metro.

Jessica Eley covers our Game of the Week, a showdown between St. Thomas Aquinas and Bishop Miege. Sean McDowell and Harold Kuntz have highlights from other games in the area.

OVERLAND PARK, Kan. -- Blue Valley High football players came running onto the field through a banner that looked like a mask, which said, "The mask we have all been waiting for.”

It was a nod to the rallies of athletes and parents chanting, “Let them play!” The district initially postponed fall sports.