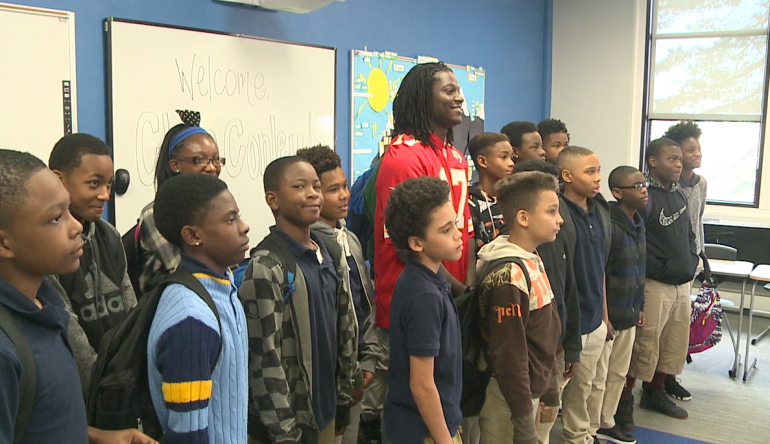 KANSAS CITY, Mo. — Hopefully the kids at Central Middle School, 3611 E. Linwood Blvd., were listening and someday, when it’s important, will remember Chiefs’ wide receiver Chris Conley’s words and stories he gave them on Tuesday during a pep rally.

Conley joined in the school celebration with City Year, an organization promotes learning and assists with education needs in high-poverty communities, such as tutoring, after school support, and student engagement.

Conley seemed to be in the right place. His mother is a teacher and education always came first with her.

“There’s always something that we can do to help,” he said. “The Chiefs organization has really taken that to heart. I’ve taken that to heart. I’ve had the opportunity and privilege to come here and speak to students and just to speak to them about the importance of academics, the importance of taking this period of your life seriously. You’re in a pivotal moment that sets a lot of direction for your life.”

When asked if he had people in his life to give him direction as he grew up, it was clear he had a lot of support.

“I had so many people speak into my life apart from my parents. I had mentors and teachers. I had a small group of people. I had a church family. So there were constant voices speaking into my life, coming from different angles, just trying to encourage me and challenge me and really, in some situations, calling me out in areas of my life that I could grow.” 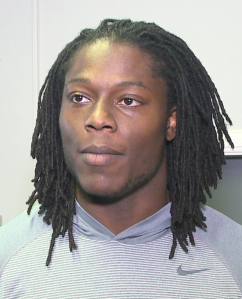 Conley sat at the front of a classroom and talked to students in an ‘open dialogue.’ To the classroom he said:

He also told them not to be known as someone who does things halfheartedly.

Many were surprised to hear Conley tell them he didn’t start playing sports until high school. It was all about academics in his house. If he didn’t have the grades, he couldn’t go hang out with friends.

He told the class when he was their age he used to care too much what people thought of him.  He said he wanted to be the big man on campus.

“Such a big deal when I was your age, was how I looked and who was my friend and what people thought of me,” he said.

He says it’s all so insignificant now. Friends come and go; friends change.

He’s grown up and knows what’s important, which is his family. That is why he tweeted out an admonishment about Donald Trump’s explanation that his derogatory 2005 conversation caught on audio tape was only ‘locker room talk.’

“My comments were mostly ethical, not political. I don’t really get into the politics of things. But I think there’s always a challenge that we should have as men to be better people,” said Conley. “I had just gotten done spending some time with my mother and sister, two of the prominent women in my life, two women I have great respect for. I believe as men we should have respect for women regardless of what your political party is, regardless of who you’re voting for. Let’s be better people and let’s be respectful.”

Conley is looking forward to playing on Sunday against the Oakland Raiders. The bye week has been good, though. He’s been resting his legs.

“There’s a lot of miles that receivers put on their legs,” he said.

“As the team, we gotta just focus on doing our thing, put together a complete game and calm down, not let the moment be too big for us and just play football the way that we played in the preseason, said Conley.

KANSAS CITY, Mo. -- On Monday, Washington's NFL team announced they're getting rid of their Redskins name and logo. Some people are calling for the Chiefs to do the same. The team is facing mounting pressure to change their name and much of the Native American imagery that takes place at games. But the indigenous community is torn on the matter. "It’s definitely about time that Kansas City step up…

WASHINGTON, D.C. -- After years of controversy, the Washington Redskins made it official Monday: that name will no longer be used.

The NFL team hasn't said what the new name might be, but some lawmakers want other teams to follow suit.

FAYETTEVILLE -- On Friday, the Pac-12 joined the Big Ten in going to a conference-only season this fall.

Among the Power 5 that leaves the SEC, Big 12 and ACC with decisions to make. The SEC will hold a meeting on Monday regarding its status, but has said previously it wants to wait until later in July to make a decision. The meeting on Monday was scheduled before the Pac-12 made its announcement on Friday. The Big 12 and ACC have also stated plans for a late July decision.