JEFFERSON CITY, Mo. — In a little less than a month into the new year the state of Missouri has a new 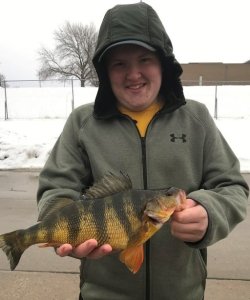 Tyler Halley, of Maryville, was fishing with his uncle and family friends on January 24 when he a pretty good tug on his line.

“I literally dove into the water and the fish a bear hug so it wouldn’t get away,” recalled Halley.  “It was freezing! I had to go sit in the truck to warm up after that.”

Halley said the plunge into the water was worth it to hold a state-record.  Missouri Department of Conservation verified the fish’s weight at a certified scale in Maryville.

The one-pound, 14-ounce yellow perch was caught at a private pond in Nodaway County.  Tyler was using the pole-and-line method.  He beat the 11-year-old record by four ounces.

“It feels pretty nice to have a state record,” Halley said.  “I’m going to get a replica made of it.  We kept the fish alive in an aerated cooler because we wanted to get it certified.  We ended up releasing it back into another pond.”

DAYTONA BEACH -- Emporia native Clint Bowyer and many other drivers are showing support for fellow NASCAR driver Ryan Newman after a scary crash in the Daytona 500.

GRANDVIEW, Mo. -- Girl's high school wrestling is blowing up across the country -- including right here in the metro.

Two years ago, the Missouri State High School Activities Association created separate division for girls to compete in. Since then, girls have made big strides in the sport.

KANSAS CITY, Mo. -- The Kansas City Royals are back at Spring Training and they're offering a steal of a deal for people wanting to attend Opening Day.

This year, the club is offering a special "Tripl3 Play" deal.