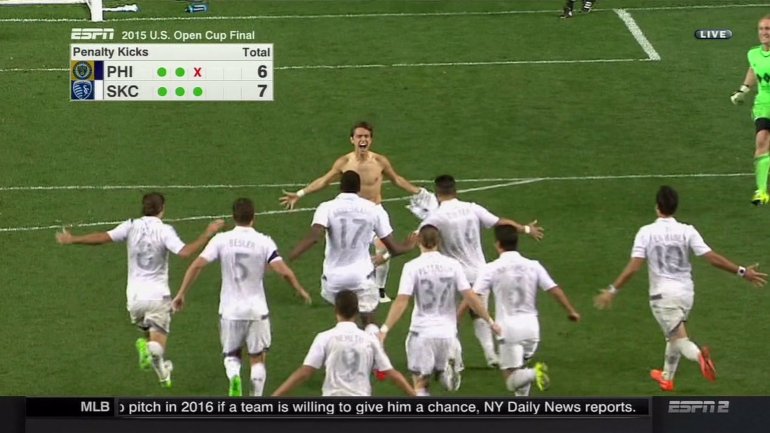 CHESTER, Pa. (AP) — Jordi Quintilla scored the winner in the eighth round of penalty kicks, Tim Melia made two saves in the tiebreaker and Sporting Kansas City beat the Philadelphia Union on Wednesday night for their third U.S. Open Cup title.

Sporting KC won the shootout 7-6 after the teams played to a 1-1 tie.

John McCarthy was brought into the game in goal at the very end of extra time after leading Philadelphia to two shootout wins in the tournament, but stopped only Krisztian Nemeth as the Union lost the championship game at home for the second straight year.

Nemeth tied it in the 65th minute, tucking a curler past starting goalkeeper Andre Blake for his fourth goal in four U.S. Open Cup games.

Sebastien Le Toux opened the scoring in the 23rd minute when he ran onto a perfect long ball from fellow Frenchman Vincent Nogueira and beat Melia to the far post. Le Toux has 16 career goals in the competition.

Sporting Kansas City earned one of the United States’ four spots in the 2016-17 CONCACAF Champions League.

‘This is unbelievable’: New running back Le’Veon Bell ready to roll with the Chiefs

KANSAS CITY, Mo. (AP) — Le'Veon Bell once carried the ball a league-leading 321 times in a single season for the Pittsburgh Steelers.

He doesn't figure to get nearly as many chances with the Kansas City Chiefs.

KANSAS CITY, Mo. -- Fresh off of a bounce back win against the Buffalo Bills, the Kansas City Chiefs are looking ahead to Sunday's divisional matchup against the Denver Broncos at 3:25 p.m.

COLUMBIA, Mo. -- Cameras caught a sweet moment before a news conference involving Mizzou football Coach Eli Drinkwitz when he took a video call from his daughter.

She was asking if he'd be home tonight, which he was able to answer yes. They then said their "I love yous" and hung up.

FOX4 Forecast: A major temperature drop with some rain