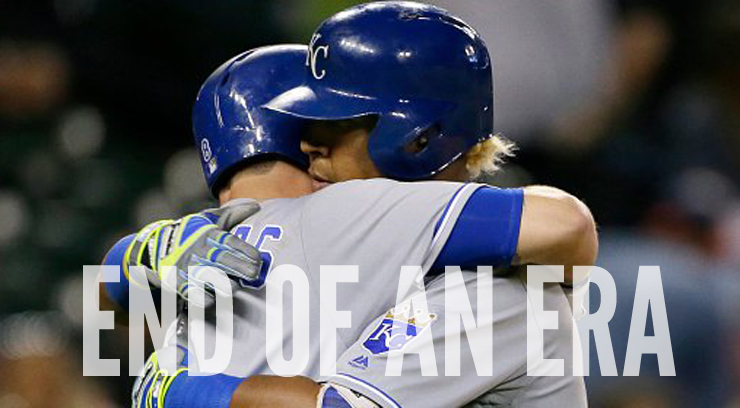 KANSAS CITY, Mo. — The golden era of Royals baseball comes to an end this weekend.

Many of your favorite players are set to become free agents, meaning they could be wearing a Royals uniform for the last time.

Moose. Hosmer. Cain. They’ve become household names over the past five years. These three – along with the rest of the Royals – ended decades of losing in Kansas City and brought us a world championship after a 30 year drought.

But alas, all good things must come to an end.

These five were a huge part in the Royals winning an American League pennant and going to two World Series, winning it all in 2015.

The Royals might be able to re-sign one or two of them, but guys such as Hosmer, Moose and Cain will all demand a lot of money – and most likely be on another team next season.

The good news is some of your favorite players are still on contract, guys such as Danny Duffy, Salvador Perez and Alex Gordon.

While the Royals fell short of the playoffs this year, our free agents made it a memorable season: Moustakas broke the Royals home run record; Vargas leads the major leagues with wins; and Hosmer has one of the highest batting averages in the American League.

“It’s so fun what we’ve all got to do here as far as getting drafted and coming into this organization and gathering a bunch of young guys together and saying you’re going to be on a major league team and bring baseball back to a city,” Eric Hosmer said.

By the way, their time here really helped the team prosper financially as more than two million fans have come to The K each of the past three years to see the Royals play.

While we’re going to miss the guys who leave, it’s now time for a new batch of young blood to come up through the system and win us another World Series.

KANSAS CITY, Mo. -- Kansas City put its best foot forward Thursday, hoping to earn a bid to be one of the 10 U.S. host cities for the 2026 World Cup.  But the pitch to put the world’s best soccer players on the pitch at Arrowhead Stadium was done virtually because of the global coronavirus pandemic. There was no rolling out of the red carpet. Instead, 11 members of KC…

PRINCETON, N.J. -- The Ivy League on Wednesday became the first Division I conference to suspend all fall sports, including football, leaving open the possibility of moving some seasons to the spring if the coronavirus pandemic is better controlled by then.

“We simply do not believe we can create and maintain an environment for intercollegiate athletic competition that meets our requirements for safety and acceptable levels of risk,” the Ivy League Council of Presidents said in a statement.

Jimmie Johnson is cleared to return to racing

CHARLOTE, NC – Seven-time NASCAR champion Jimmie Johnson has been cleared by doctors to return to competition.  He will be behind the wheel of the No. 48 Ally Chevrolet this coming weekend at Kentucky Speedway.

Johnson tested positive last Friday and was not with the team at Indianapolis, the first race he has missed in his Cup Series career.  Johnson was tested on Monday and Tuesday this week and both tests came back negative.  His doctor cleared him on Tuesday evening, in accordance with NASCAR guidelines.  He never experienced symptoms.