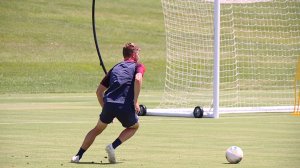 With a pass to the next stage of the Gold Cup tournament in the bag, this final group stage match for Christian Pulisic and company will determine who they face next in the quarter finals of the competition.

If the team manages to get a win on Wednesday, they’ll go up against the runner-up of Group C, which can either be El Salvador, Jamaica or Curaçao.

Central defender for the national team and MLS club LAFC, Walker Zimmerman, said that the team’s mentality is solely focused on beating Panama on Wednesday.

“It doesn’t matter [who they face]. We’re focused on us. We’re a team. We’re one unit, and no matter who’s playing, we need to be ready from the first minute,” Zimmerman said.

The U.S currently sits in first place of Group D with six points and a goal difference of 10. They’ve played seven matches in Kansas City throughout their history and have never been defeated.

Coach Greg Berhalter, who was appointed in 2018, said that he thinks it’s great for the national team to be playing in Kansas City.

“You know Kansas City has always been a fantastic place for the National Team. I think the stadium [Children’s Mercy Park] is one of the best in Major League Soccer for creating a great atmosphere,” Berhalter said.

Last time the U.S came to Kansas City, they obtained a 4-0 win vs. Bolivia. Tickets are still on sale, and the game begins at 8 p.m. Wednesday

GRANDVIEW, Mo. -- Girl's high school wrestling is blowing up across the country -- including right here in the metro.

Two years ago, the Missouri State High School Activities Association created separate division for girls to compete in. Since then, girls have made big strides in the sport.

KANSAS CITY, Mo. -- The Kansas City Royals are back at Spring Training and they're offering a steal of a deal for people wanting to attend Opening Day.

This year, the club is offering a special "Tripl3 Play" deal.

KANSAS CITY, Mo. -- The Negro Leagues Baseball Museum is celebrating the 100th Anniversary of the birth of the Negro Leagues with a special ceremony on Thursday morning. It's set to begin at 11 a.m.

You can watch that ceremony live in the video player at the top of the page. Click here if you aren't seeing the live player.