KANSAS CITY, Mo. — A cold day in store for us Tuesday as the forecasted high would be the 2nd coldest on record for this date! That’s the nature of this significantly cold air and that’s why we’ve got snow in the forecast for Tuesday morning.

From now until 4 a.m., it’s going to be pretty quiet. A rain and snow mix will start to fill in to the northwest. 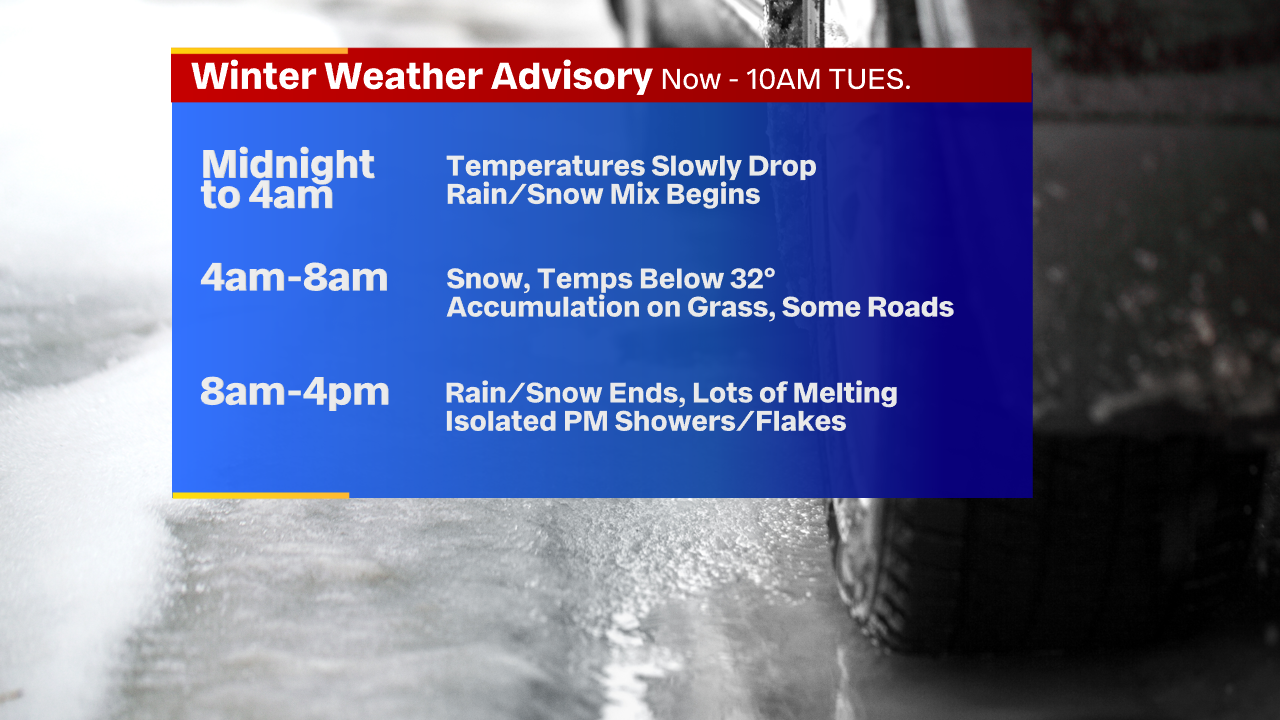 That’s why areas a bit further north have a great likelihood of snow sticking on the pavement and hanging around a bit longer. For most of us, 4-8 a.m. is the best time frame for accumulation on the grass and even some roads.

As temperatures dip below freezing for a couple of hours, this is our best bet for slower conditions on the roadways.

Will this cause major issues on the roads? Probably not. It is April after all. But there will absolutely be a few slow downs early in the morning as snowfall rates overcome the warmer ground beneath the surface.

Northern Missouri will have a slightly higher window for accumulating snow with temperatures below freezing for a bit longer.

The immediate metro’s best opportunity for accumulating snow on the roads is probably between 5-8 a.m. when temperatures are the coldest and the snowfall rates are the highest.

Overall, many of us could see up to 2 inches in the grass when it’s all said and done. This will be over by mid-morning and should be gone by lunch or shortly after.

This will be a very wet snow that mostly accumulates in the grass. It may cause a few issues on the roads that make things slower, but school is unlikely to be impacted.

FOX4 Forecast: Off and on rain ahead

NEW YORK — AT&T said Monday it will combine its massive WarnerMedia media assets, which includes HBO and CNN, with Discovery Inc. to create a new media heavyweight in a $43 billion deal.

The deal, which isn't slated to close until next year, will create new publicly traded company that will enter a streaming arena that has been flooded in the past two years with new players including those owned by AT&T and Discovery, which operate HBO Max and Discovery+, respectively.

KANSAS CITY, Mo. -- After the CDC issued its new guidance for mask wearing indoors for people who are vaccinated, several large grocery stores across the country have decided to make mask wearing optional.

COLUMBIA, S.C. — South Carolina Gov. Henry McMaster has signed into law a bill that forces death row inmates for now to choose between the electric chair or a newly formed firing squad in hopes the state can restart executions after an involuntary 10-year pause.

South Carolina had been one of the most prolific states of its size in putting inmates to death. But a lack of lethal injection drugs brought executions to a halt.

Utilities to resume disconnecting service for past due bills, high cost to reconnect

‘Alien Fungus’ showing up on Missouri trees; is it dangerous?

Governor Kelly declares state of emergency due to flooding

Many students, teachers return without masks; doctors say unvaccinated should cover up

Isolated Thunderstorms Precip: 30%
Close
You have been added to Daily Weather Forecast Newsletter

A sleeping Kansas neighborhood is jolted awake by a fatal crash

Utilities to resume disconnecting service for past due bills, high cost to reconnect