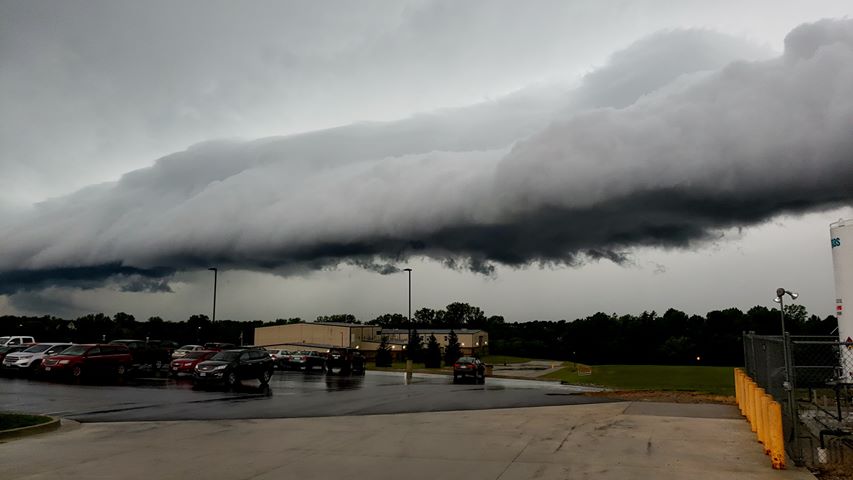 Many of us woke up to scenes like this one above: low hanging shelf clouds ominously moving across the metro. The wind picked up, followed by heavy rain and very frequent lightning.

Severe Thunderstorm Warnings were issued multiple times for different counties. While there were no tornado warnings issued, there were a few videos that showed something ahead of one of those shelf clouds.

While most of the metro's focus was on straightline wind gusts, torrential rain, and frequent lightning this morning, there were a few reports of some rotation near the Grandview/Belton/Lee's Summit area. This was likely a "gustnado", which forms from the outflow winds. It's not connected to the main cloud base, therefore not classified as a thunderstorm. It still produces wind damage, however!

I’ve combined both the radar video and the submitted video above.

Notice how this is closer to the leading edge of this storm. You can especially tell because it’s much lighter.

While there’s rotation associated with this portion of the storm, it likely wasn’t a tornado. It’s something we refer to as a “gustnado.”

The left image is obviously radar imagery, just a different product than my above video. The reds and greens indicate wind direction. This is a product we often show when we’re looking at rotation. This was the image from 7:45 a.m.

It quickly turned into more of a straight line wind event within 5 minutes after this.

Why no sirens?  It’s not technically a tornado, so it wouldn’t carry the same intensity that warrants the sirens to go off.

That being said, all counties have different classifications for sounding the sirens, but that’s a totally different ball of wax.

What formed ahead of the shelf clouds was known as a “gustnado.”

You know that cool rush of air you feel out ahead of big storm? That’s attributed to the “gust front” ahead of the main line of thunderstorms (in this case, severe thunderstorms.

They’re not attached to the cloud base of a supercell thunderstorm, so they don’t generate the intensity that would need a warning.

Do they need to be ignored? Of course not.

But a bunch of the comments I saw had a lot of people concerned that they were missing this tornado and the sirens weren’t going off. That’s not the case.

Most of the damage from the storm, like the picture above, was created by the straight line winds that were included in the Severe Thunderstorm Warnings.

Thank you, as always, for your videos and photos that help us identify different types of weather phenomena and help keep you safe in the process!