Happy Saturday everyone…although it’s one of those days where a bowl of chili…a pot of soup…10 cups of coffee…or a bag of doughnuts are probably the better food choices today. It’s dank and dreary out there with temperatures approaching 40° as I type this. There is rain in the region…and it’s just wet out there…milder days are coming…better Sunday and much better Monday>Tuesday

Tonight: Some clearing but fog could develop in parts of the region. Temperatures dropping to near 25-30°. If there are any wet areas on roads/pavement…watch for black ice.

Sunday: Any morning clouds/fog will clear out and we should see sunshine during the afternoon with highs near 50°

Monday: Better with highs well into the 50s

Tuesday: Variable clouds with milder weather highs around 60° or so. There are some things we’ll be tracking…perhaps some brief showers and a low cloud surge that may impact the region later in the day.

Yuck with a capital Y. Satellite picture tells the story.

Not a lot of clear weather in there…although parts of OK and western KS have cleared out.

We’ve been fighting rain in the region…ranging from mist to drizzle to some light to moderate rain towards the south of KC so far today…radar shows this, and what activity is out there will shift away from the area later today.

For sure though the heaviest rains will be towards southern MO…some flooding is possible down there as well from this. The hi-res NAM model shows some heavier totals…and flood watches/warnings are in effect for parts of south MO into tomorrow. 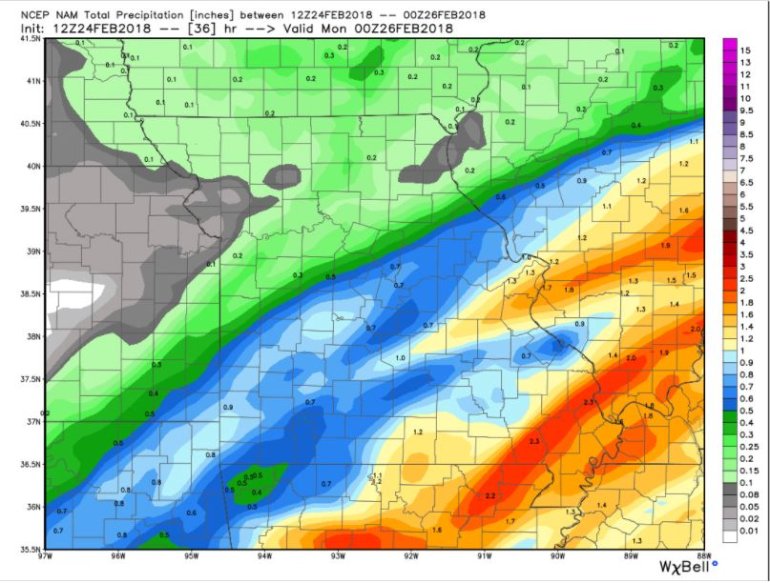 Here are the latest watches/warnings from the NWS in Springfield. The other aspect of this system is severe weather…and it’s here that you can sort of feel a subtle changing of the seasons starting to happen. There has been a lot of warmer than average water down towards the Gulf of Mexico…this is helping to feed into this storm down south of here and allowing for some extra warmth and moisture to play a role in thunderstorms and flooding rains that are going to be more and more of an issue for the deep south.

The map above shows the probabilities of severe storms while the map below shows the probability of tornadoes and that area from about Memphis to Texarkana is a big concern today. Instability isn’t the greatest today down there because of clouds but what storms do form…will be able to tap into favorable wind shear in the lower part of the atmosphere to allow them to rotate (in a broader sense) and potentially create some rather significant tornadoes.

This whole mess will get away from the region overnight…and hopefully more of a westerly flow of air tomorrow will allow us to clear out…and get a bit more tolerable out there.

We’re 3.1° below average and with about 5 days to go this month…it will turn into a colder than average February and in the end a colder than average winter. As I mentioned at the start of the month…as this particular February goes…so goes the winter of 2017-18.  We will finish the month though with a stretch of warmer than average temperatures so let’s see where we actually end up as our next storm system moves through the Plains states.

I wanted to touch on something that I’ve been meaning to blog about for the last couple of days but have gotten pulled into other work related things…and that is some interesting happenings up towards Greenland and westwards. In particular today I wanted the touch on something that we call the North Atlantic Oscillation or as we say in the weather world the NAO.

At it’s simplest it’s defined as the difference is air pressure from a phenomena called the Icelandic Low and the Azores High. While this may seem like some sort of “boring” thing..actually it’s interesting because it can be readily measured and we know that when the NAO is biased positive or negative…there are influences in the storm track across the North Atlantic and sometimes these influences spread farther westwards…and that catches my attention.

On a day to day basis it’s not really a factor in our weather locally…I’ve seen huge “negative” NAO values give us warmth…and huge “positive” NAO values gove us cold. Conventional wisdom would argue the opposite. So this “feature” isn’t the end all beat all that some would like it to be.

Weather HATES to be confined to a box…results are always varied. We’d love it if we can say “well…this particular factor is doing this…so as a result this is a “lock”. It’s as if we want to discover the next great thing. It doesn’t work that way though…

and when negative this is the GENERAL idea.

So far this winter…the NAO has really had a phenomenal run of POSITIVE values. As a matter of fact we sort of have to go back to mid>late November to find some significant negative values… 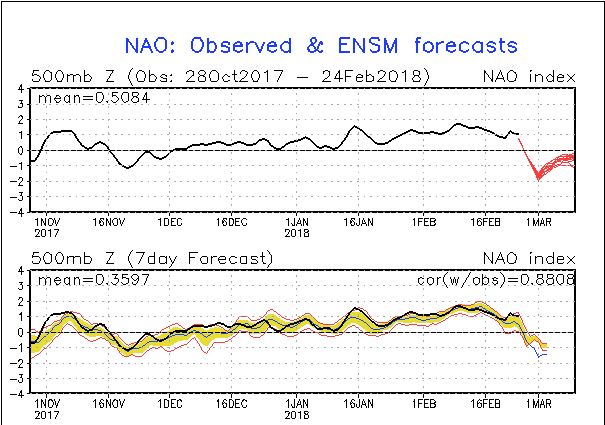 See that “dip” towards after the 16th of November in the top part of this…then notice all the near 0 to positive values for the winter as a whole so far…now look at the forecast significant dip in the values over the next 10-15 days (based on the GFS model at least).

You can actually see how this affects things at the surface with the air circulation…look at this tweet.

This is what a strong NAO/AO negative phase means in physical terms.
HYSPLIT back-trajectory forecast based on GFS expects air over Nova Scotia next weekend to be of an easterly origin.
The #BeastFromTheEast makes it across the Pond!
A complete reversal of circulation. pic.twitter.com/2x9HTXLRii

This shows a parcel of air starting near Greenland and then goes east towards far northern Europe before coming BACK west across the Atlantic towards Nova Scotia. This is an air mass that starts today and ends on the 2nd. Fascinating!

There are some that automatically would say…here we go…we’re setting up for cold and snow from the Plains eastwards. The NAO though really doesn’t play a tremendous role in the day to day weather here in the Plains…some feel that we only get big snow storms when the NAO is negative…but this is not true.

A few months ago…I shared some exclusive research with you concerning the NAO and the AO (Arctic Oscillation). I want to revisit that with you with a focus on KC Snowstorms.

Over the last 30+ years…I listed the dates of the biggest 2 day snows…then towards the right of that in columns N>T the tendency of the NAO. When there was a negative number it got a BLUE box…and when positive it got a RED box.

So over the course of the past 23 big snows in KC going back to 1980 I believe…the BLUE boxes were more prevalent in column L. There were 15 occasions where the tendency was negative (BLUE) and 7 occasions where it was positive (RED). There was one that was split. So YES the negative NAO is an indicator of better “bigger” snow locally BUT NOT THE ONLY WAY WE CAN GET BIG SNOWS…

Again helpful but not end all be all…and not the “smoking gun” that some would lead you to believe…at least not for KC.

Another type of index value that we use is called the AO or arctic Oscillation…what about the same information above but using the AO as a guiding light to bigger snows?

Hmmm I smell a follow up blog on Sunday.

Have a great weekend!

Our feature photo comes from Joe‎Thurman Hoskins‎ up in Lake Viking. 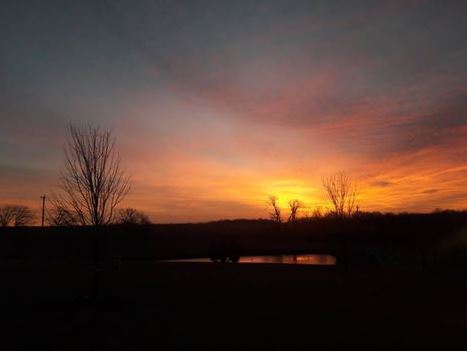