Some beautiful fall weather is on tap for the region as fall is now here in a big kind of way…noticed on my trip back and forth from St Louis that it appears the fall leaves were starting to change a bit more there compared to locally but there are some colors starting to show up now. These cooler mornings will help that transition a bit this week although the shorter days are the biggest factor along with rain trends that cause either great colors or weaker colors

This weekend needs to be watched for a early season frost/freeze. Typically in KC proper this is more of a factor later in the month..so this would be considered “early” if it happens…but it does appear as if a strong cold front will move in on Thursday.

Today>Tuesday: Delightful with highs near or above 70° or so and lows in the 40s

Wednesday: There may be some showers/storms in the area. Highs near 70°

Thursday: Much better chance of rain…70s

Wanted to get a quick blog out there to alert all those with agricultural interests about the potential freeze/frost coming this way.

The 2 mornings that would be of most concern is Saturday and Sunday morning…the 12th-13th.

In terms of what is “normal”…take a look at the average last freeze in the spring and 1st freeze in the fall. For the Metro typically it’s more like the last week of October…so in reality this is perhaps 10-14 days early. 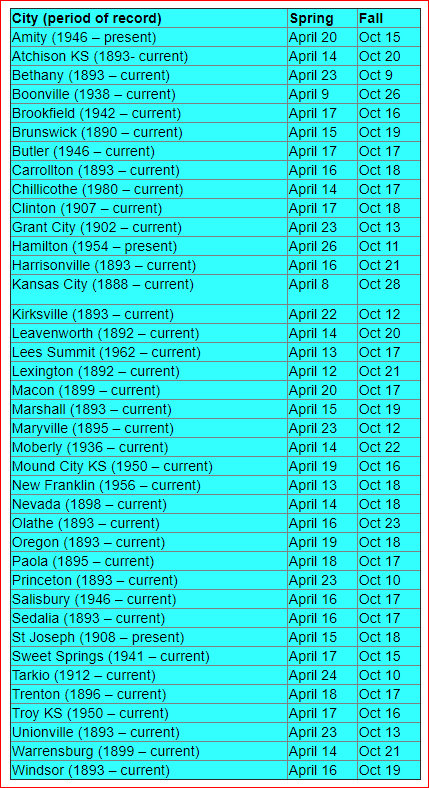 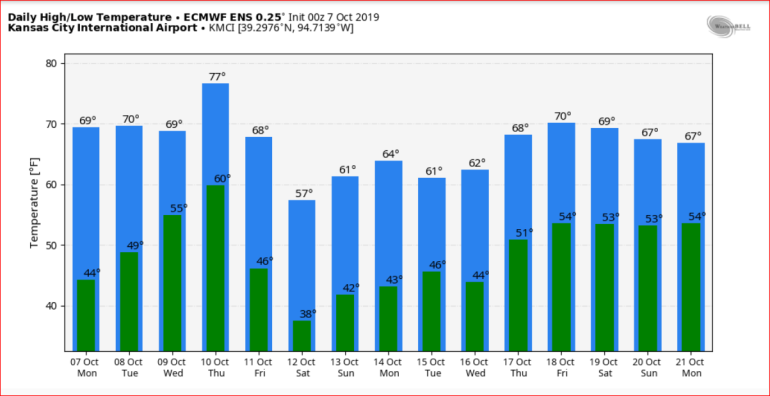 While we focus on the cold…other parts of the upper Midwest/western Plains may be dealing with an early season snow. There is actually a blizzard risk for the northern Plains…especially the eastern parts of North and South Dakota!

Accumulating snow is possible across the Plains and western Minnesota late this week and this weekend. However, some snowflakes are likely as far east as Wisconsin by Friday night.

Keep in mind, it is impossible to forecast accurate amounts this far out! pic.twitter.com/sDemqdP6qU

The GFS model is similar and even colder…

This is going to be air that comes down from far NW Canada and Alaska…where it’s pretty cold now as the daylight is shrinking very quickly.

OK that is it for today…wanted to get a blog together for all the farmers and others with agricultural issues. I noticed a lot of the feed corn was harvested or will be soon…so hopefully no major impacts from this.

Our feature photo comes from Debi Jordon Zink out in Grain Valley, MO 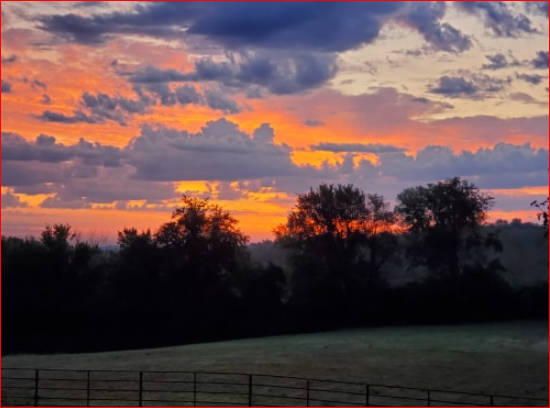 We continue with the gorgeous weather this week! A gradual warming trend expected as we climb out of the 70s into the 80s by the end of the work week. This dry pattern continues with our next chance of rain showing up into the weekend forecast. Details in the update here!

Nearly 100,000 businesses have permanently closed since March. Yelp says these are the hardest hit shops

Nearly 100,000 businesses have permanently closed since March. Yelp says these are the hardest hit shops