Happy Tuesday…windy out there this morning and the winds will continue to crank for a good part of the day…but in a development that isn’t a change…it’s going to be above average again in the temperature department…and so what else is new. With the winds blowing though…it will feel chillier than the readings you see on your car thermometer. Also of note is a late week system that looks rather disjointed (at this time) but should generate some precip…probably rain with maybe some tail end snows heading into Saturday morning.

Today: Sunny and windy with highs near 50°. Winds will be gusting to about 30 MPH or so…perhaps higher in a few places…especially this morning.

Tonight: Fair skies and colder with lows in the 20s (more seasonable)

Wednesday: Not too bad with highs in the 40s and still a bit breezy

Thursday: Some clouds move in  but overall pretty seasonably with high again in the 40s

Well we’re starting the day with temperatures above our typical high temperatures…and that has been a common theme for quite some time in the area. Our monthly temperature is running more than 8° above average…which, through the 1st week of JAN is 23rd in terms of warmest starts to the month of January. 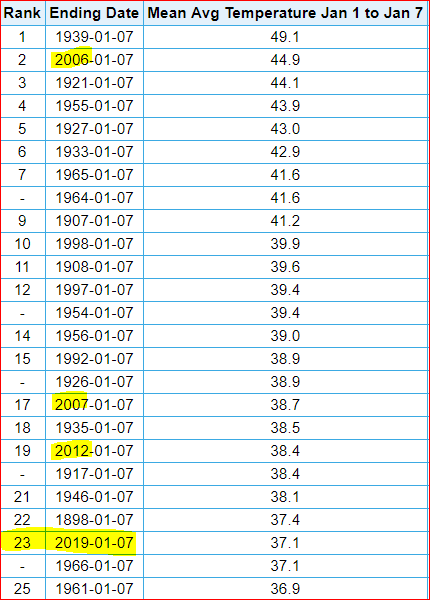 Since the 1st day of December through yesterday this is the 33rd warmest specific time frame (12/1-1/7). 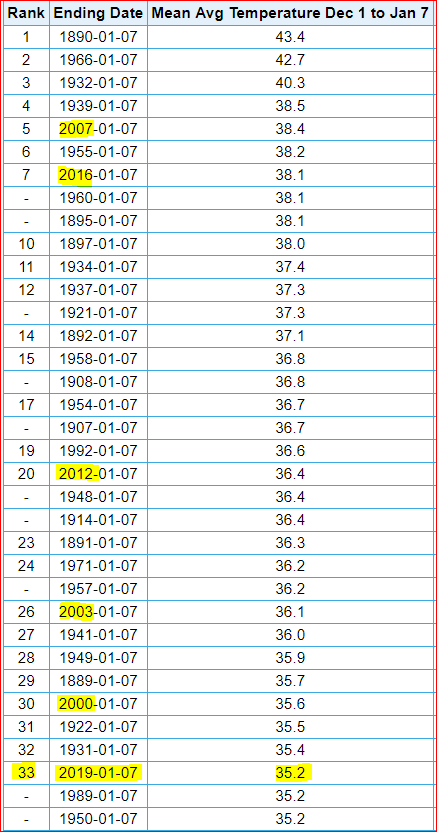 Temperatures will remain above average (overall) into Thursday.

This has been the situation almost since the blizzard…just in the last 30 days…the nation has been mild by comparison to typical DEC/JAN weather. The coolest, relative to average, has been in the SW part of the country. 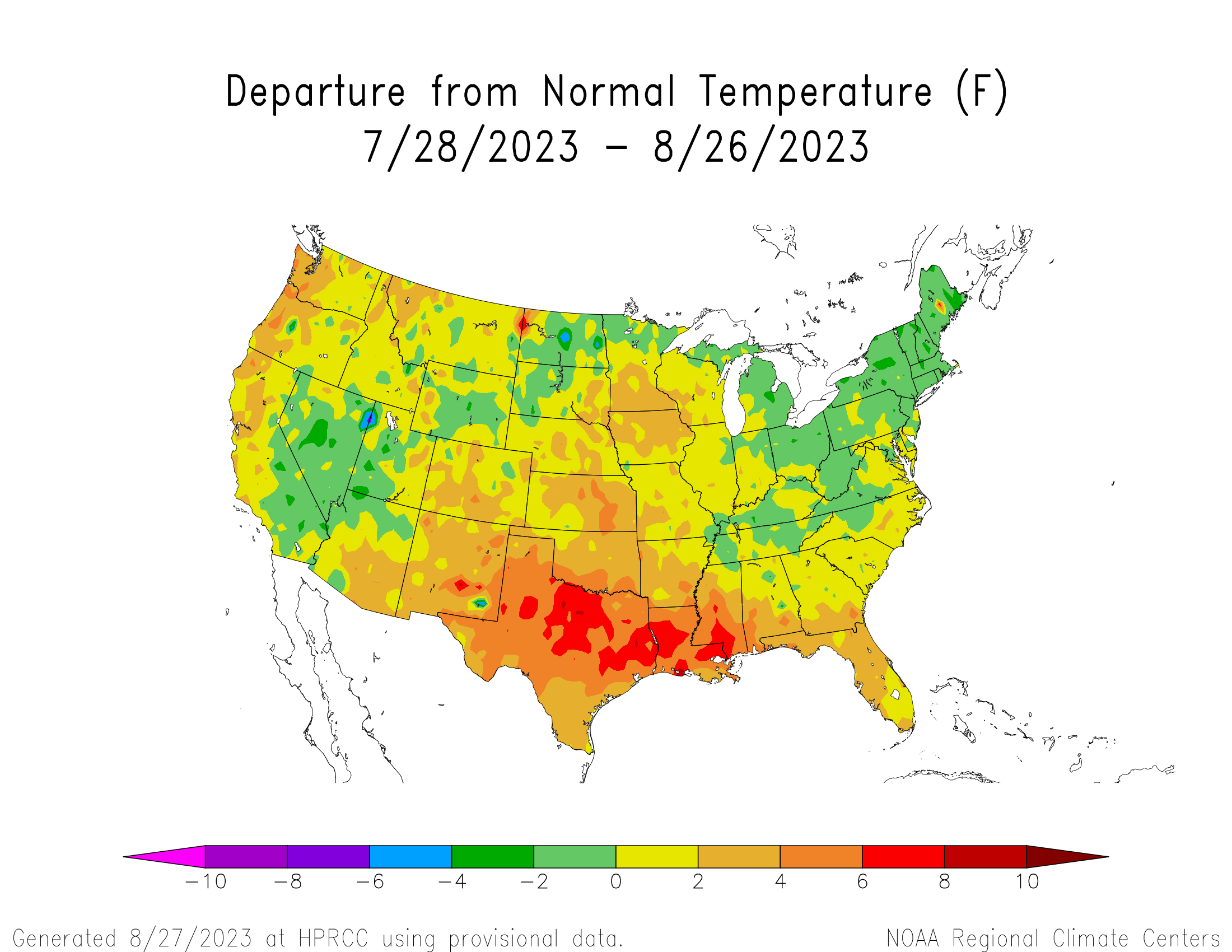 There are still no prolonged cold shots of air coming this way…there will be more pronounced colder air masses over the next couple of weeks but we’re still not setting up for colder air dumps from the Arctic although I can see some seeds of change heading this way towards the end of the month potentially.

One way of looking at that aspect is by looking at the temperatures at about 5,000 feet or so…I want to show you the EURO model later today…

You can see the Plains flooded with “warm” air…

Sort of the same BUT you can see some colder air (that’s cold) just across the border.

There are signs we may dip into that but perhaps just a transient type thing after mid-month. Before that though there will be more ups and downs I think…and more above average days next week and perhaps more 50s coming our way too!

So with all this talk about “warm” air (with the perspective that it’s January)…what about later this week.

The loop above is via Rutgers…and you can see some stronger winds digging into the western boundary of that big storm…that is another wave that will drop into the SW part of the country.

How these disturbances “play with each other” will go a long ways to determining whether we get just some rain…some wintry mix or perhaps some accumulating snow. The timing of all this happening is Friday into the 1st part of the day on Saturday.

Obviously with a system out in the Pacific there are still many questions about how all this plays out…so at this point it’s worth paying attention too. The model data has been playing around with something for this weekend off and on for the last week or so. Yesterday and today’s trends are more on than off…but it’s a delicate play out and IF the northern wave is stronger and faster it will shunt the better precipitation potential farther south of KC…if the opposite and the southern wave is predominate and comes farther north..we’ll have more rain than anything because it will warm the surface and aloft too much perhaps. IF there is something in between then we can get something a bit more wintry.

The jackpot for snow lovers who have been lacking for about 6 weeks now…is somehow IF the to can sort of merge together and develop into a functional storm in the Plains…allowing more of a cold pool to develop on the backside of the storm…allowing more moisture to come up and around into the cold pool and then dumping that moisture in the form of snow into at least parts of the region.

It’s NOT out of the realm of reason for something like that to happen. Remember the blizzard didn’t look like the “blizzard” for quite some time in the data before the blizzard actually happened although the model data was pointing to a significant storm coming for quite a few days before it was the blizzard.

This storm is somewhat different and since we’re dealing with the interplay of southern waves and a northern stream type wave…how they come together (if they even do) complicates a confident playout.

Obviously with the region focused on Saturday afternoon this is an important component of the forecast…and while it appears that rain will be an issue on Friday…the ending part of the storm (the potential snow) is still a question…and any slowdown (not out of the question as well) means potential impacts to tailgating and perhaps the game itself. An analysis of the GFS ensembles do show some potential of a slowdown in the end part of the storm… 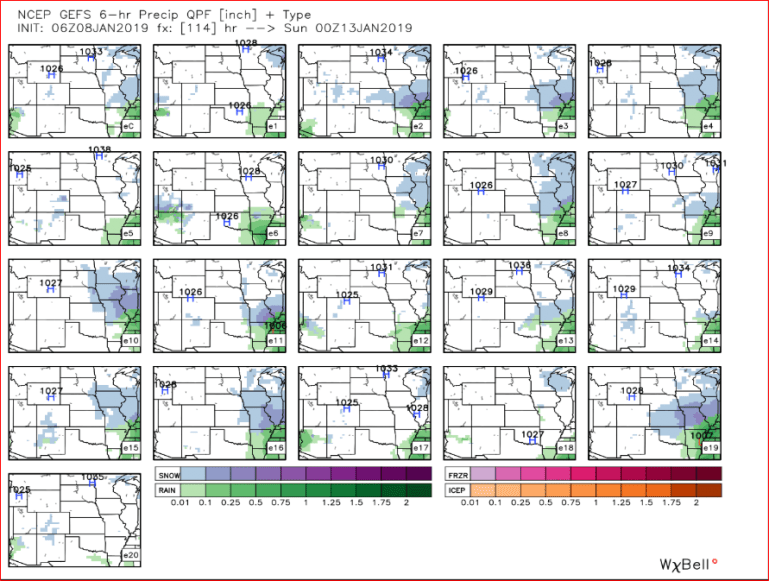 The graphic above shows the precip accumulation from 12P-6P Saturday…this would be at least during tailgating and notice that out of the 21 members of the ensemble run…more than half have at least something lingering (of various intensities) into at least the afternoon hours.

Again there are many issues with this including a pretty darn far south surface low track…too far south for comfort at this point. Really would like to see that closer to at least the I-44 corridor, if not even a bot farther north than that. This far out though…that is also possible…so I’ll be watching the trends over the next couple of days for you.

So I left with nothing to really talk about and am back with something to talk about. I like that! 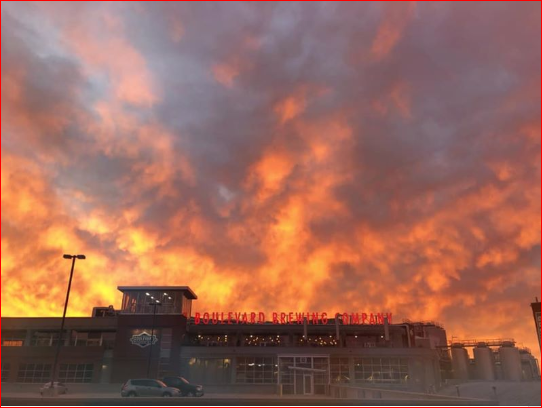 Unlike yesterday morning, we're starting out cloudy here in the metro. Some drizzle/showers continue down in Benton County, but those will move away as a cold front pushes through this midday. Afternoon gusts will increase to 35-40 mph afterwards, but will settle overnight. This week, skies remain dry with some cooler pockets of air overhead. Another precip (rain & snow) chance could come in Thursday. We'll monitor these trends over the next few days.