Good morning…it’s rumbling out there with radar rather busy on this Friday morning. I realized many of you last night did not watch the newscasts we did (or anyone else’s either) because of the football game. Last night on the news I talked about how the severe weather risk today was going to be tied to the potential instability/heating that could get going this afternoon…well these storms this morning are definitely going to cut down on that potential from KC northwards I think. That’s probably a good thing.

Today: Storms continuing with rain shower all morning into the early afternoon before waning slowly today. Temperatures will all the clouds/showers in place will stay in the 70s all day it appears

Locally heavy rain is still possible in spots this morning. See the discussion part of the blog for radar updates etc.

Tonight: Storms will be moving away from KC. I can’t promise a dry evening however as a cold front will be moving through the region, so additional rains are possible. For areas that get more heating today (SE of KC) some stronger evening storms are possible (maybe some severe weather) Odds at this point favor areas towards the Marshall-Sedalia-Butler-SE KS region for this chance. (note that this will likely change some during the afternoon as we figure out and see who gets more heat)

Radar paints the picture nicely this early Friday morning…rain and thunder through most of the I-35 corridor.

The rain is moving from the SW to the NE. Some of the storms are producing torrential rainfall that may lead to localized flooding in areas that are more prone to that in the outlying areas.

Doppler estimated rainfall totals are varied but do show some heavier amounts of over 2+” in isolated areas.

The KC metro really hasn’t had a lot of rain (overall). Although northern Platte county as you can see did get some heavier rain last night with the storm that passed north of the stadium complex. I tweeted out that IF the stadium complex was 30 miles farther north, the game would’ve been stopped and delayed for about an hour as the storm was passing through considering all the lightning that was involved with it.

The morning surface map shows a virtually stationary front just north of KC. This front will make little progress southwards today because of an area of low pressure moving along the front from the SW. 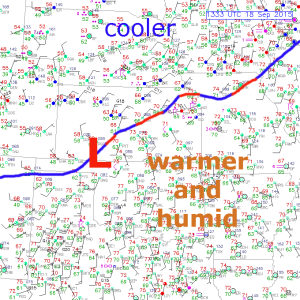 Note the cooler air in the upper Midwest…that moves in overnight tonight through the weekend.

The storms are coming about, in part, because of continued warm air and moisture being pushed our way plus some remnant outflows and strong winds just above the surface (the low level jetstream). All of this will conspire to keep things wet for at least the next 4-6 hours or so at times. All that does is reduce the heating potential this afternoon and also work over the atmosphere.

The latest satellite picture shows the extensive cloud cover in place…remember yesterday I said that IF we can get into the 85-90° with the instability being generated, we’d have severe weather potential later today. Well that to me at this point looks like a long shot for the KC area. This is better news for the Sporting KC and HS football games this evening. We’re NOT out of the woods though because this evening the front will be moving through the area so there should be at least some rain in the area during the football games.

So is the severe weather risk for sure NOT going to come into play for the KC area? Not 100% for sure because there is still a chance that we clear out a bit more this afternoon and build the instability…I think though that chance is down to about 20% for KC. I’ll be watching that for the afternoon hours. Again IF we’re struggling in the 70s…it’s going to be tough to get a lot going locally.

Areas farther southeast may have a better chance assuming there is more sunshine and more heating there.

Another note…after the cold down this weekend…we’ll warm u again next week into the 80s. It will also be mostly dry next week as well which is typical for fall which starts on Wednesday in the pre-dawn hours.

What it does point out, at least in the morning runs, is the off/on nature of the rain for the rest of the day today.

Sunday looks mostly dry once again, and Saturday's weather will carry over to today: cloudy and cool with highs near 40. By the evening, some drizzle/light rain may finally make it to the ground, but as the temps drop below 32 overnight, a changeover to a wintry mix and, eventually, snow will happen just before the AM commute. Roads will turn from wet to slushy and icy to possibly snow-covered as some moderate to heavy burst could overpower the "warmth" of the pavement. Precip will fade Monday evening into Monday night, but a dusting to 2" is still possible everywhere, with pockets of 3" possible just south of KC and to the northwest. Stay tuned for updates as we track this first winter blast!

Well...as next week draws closer, the chances for snowflakes to fall in KC are increasing. Since this is the first solid chance so far this season, it's important to stay with FOX 4 for changes and more details moving forward. First, let's focus on the weekend.

Saturday looks cool and cloudy (picture Friday's weather) with highs struggling to get to the mid 40s. We're still dry throughout today, but Sunday is when we start to see precip. move into the area in the form of rain, especially after lunch.