It’s a pretty bright and sunny morning out there as temperatures have started out the day in the 30s…but another cold front is coming into the area and that means more chilly weather to finish off the work week and to start the weekend. Right now it looks like Sunday will be the better of the two weekend days. The good news is that this next front moving in today may be the last significant cool shot in awhile…as the pattern will start undergoing changes that should allow milder air to develop and move through the Plains.

Today: Partly sunny with high clouds filtering out the sun every so often and cool with highs leveling off in the mid 40s

Friday: Partly cloudy but chilly with highs near 40°

Saturday: Cloudy with a few sprinkles or PM light showers. Chilly too with highs only 40-45°

Sunday: Should be improving with highs near 50° with some PM sunshine?

There is some light at the end of this cold weather tunnel we’ve been in. Yesterday though wasn’t too bad of a day with full sunshine and light winds…even though the highs were only around 50° (give or take)…it really was pretty nice out there…I played some golf to take advantage of the nice weather too…saw this little one out there.

Be alert…there are a lot of them out there during this time of the year in particular.

Meanwhile today will be the 15th straight day with below average temperatures…with a few more days of this to come unfortunately. The latest weather map for this morning shows another cold front moving through today. The 9AM surface map is posted below…the colder air is just north of the KC Metro this morning…the temperatures are in red. 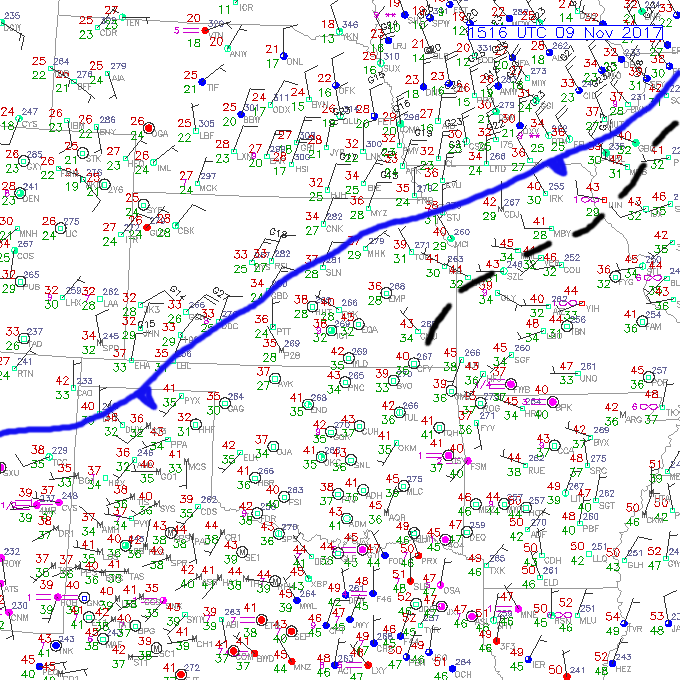 Notice up to the north…temperatures are in the lower 20s this morning…that chilly air will be flowing into the area today. The sunshine will help this afternoon but tonight we should head down rather strongly as the colder air mass will be over us. The bulk of the cold air though will be sliding through the upper Midwest into the Great Lakes region. We’ll be on the southern fringe of this…but it will be strong enough to give us a pretty good shot of cold weather on Friday.

Saturday is a bit of a conundrum, only because we’re going to have increasing winds from the SE/S BUT these winds will also allow moisture to come up INTO the cold air…that means LOTS of clouds…and with the colder air mass still hanging around to some extent + the cloud cover…the ingredients are there for a blustery and cold day. I wouldn’t be surprised that temperatures vary only 5-8° from low to high that day because of the clouds…my feeling is that it will be colder (and certainly FEEL colder) than what some forecasts are portraying this morning. This is what I expected to some extent last weekend for Saturday. In addition, on Saturday with the low level moisture in place…there may be periods of drizzle or some light showers in the region as well. There is a rather weak disturbance moving through the Plains later Saturday that will pass through the region and sweep the moisture away from the area and Sunday looks better.

Now to next week…I’m encouraged, as I was last weekend, that the week of the 13th and potentially beyond…we’re going to see some positive (from a temperature standpoint) adjustments in the temperatures. We could use it because it’s been a chilly stretch of weather.

We need to see a switch in the flow to change the outcome above…and that will be happening (as blogged about earlier in the week) over the next 14 days I think. Note the updated 6-10 day forecast…and I agree with these probabilities.

and even going farther out…heading into Thanksgiving week…

An issue with all of this is we’re be essentially transitioning from a chilly and dry pattern to a milder but still mainly dry pattern with no significant storms expected around the Plains region for the foreseeable future.

Really in the big picture…NOT a lot of weather excitement coming for awhile in this part of the country.

Our feature photo comes from Charley Caron of Garnett, KS…there are still some pretty colors out there…I think the Maple trees in particular this season have been amazing to see transition. 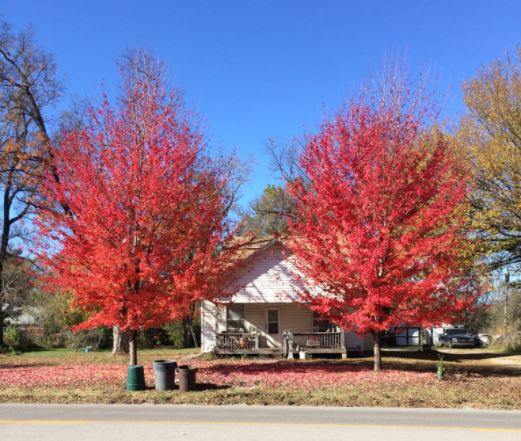 Rain has faded and now we'll turn to cooler temperatures overnight. A Frost Advisory is in place until 8am for areas north and west of the immediate metro. Temperatures won't get to the freezing mark, but we'll have the opportunity for a brief frost before a quick warmup Sunday afternoon. Cooler than average temperatures are expected for most of the week as it remains pretty dry.