Yes I will get to the elephant in the room regarding the snow forecasts this week…keep in mind though as I look at my twitter feed for what is happening in other parts of the country with this same storm system…and seeing some forecasts of 36″(!) get trimmed to 3-6″ (maybe) in the span of a day or two…I’m not feeling that terrible about what just happened (or didn’t).

Tonight: Clearing to clear skies and cold with lows near 0°-5° in spots…perhaps sub-zero in N MO.

Sunday: Partly cloudy and chilly with highs in the mid 20s…lighter winds.

Monday: Breezy and milder with highs well into the 30s. Winds increasing from the SE at 15-25 MPH

Tuesday: Rain likely and milder with highs in the 40s but turning colder later in the day and there may be a few snow showers rotating through as well

One of the things that I take pride in, especially on this blog, is just laying things out there. Right or wrong…just laying it out there. As you know I will never make 15 different forecasts and then say…see I was right! I tend not to jerk the forecast from model to model…to more or less hold the course as long as possible while at the same time showing you paths of different outcomes.

I know some folks will say 7 different things then when forecast #3 is the better one as opposed to forecast #7…say yup we were right! That’s not the way this works.

And yet day in and day out we keep trying to predict things that don’t exist.

So let’s review this storm that in the end didn’t produce as much snow as was expected. Was it a terrible forecast? Well maybe…then again stay with me on this.

What happened last night was originally talked about last weekend. I think I mentioned it in Saturday’s blog as a quick note at the end, while my full attention was on the 5-13″ snowstorm that occurred last weekend. So almost a week away we/I were identifying “something” and that something could be significant and the timing would be on Friday into Saturday

OK we can say that worked out well. Again 6 days away.

As the week started we started to push this storm a bit harder…I had some strong indications via ensemble forecasts and confidence levels that something was looking more and more promising. We started to mention accumulating snow…that too worked out.

We also started to talk more strongly about an arctic air blast coming especially affecting the Sunday football game. Well the cold blast came today…we’re in the teens right now and wind chills are in the 0° range…BUT the blast is so transient that and the arctic air really is displaced more towards the upper Midwest. Here is the 12PM map up there…red numbers are the temperatures. -5 to -15° is pretty darn cold for a Noon temperature.

Meanwhile in the KC region…our temperatures have gone nowhere today.

So the cold came…but again the game-day forecast ISN’T going to work obviously. So from about 5 days away we were partly right and partly wrong. Heck our forecast for a high today was 18° from last Monday I think. I was expecting the core of the cold to be on us tomorrow AM…it won’t be the core but still near 0° is cold for KC in January…not unusual but 15-20° below average. The thought process on my end was the new snow + a strong high on top of KC would (despite the sunshine expected from 6 days away) would conspire to keep temperatures from warming up much at all. I was shooting for around 10° and in reality that is way too low for the afternoon tomorrow…it will be into the 20s…much more tolerable.

So we got a LOT right about the cold…the wind…the coldest morning of the winter so far (coming Sunday) BUT the game day forecast was wrong…again we were coming off that extreme cold on Wednesday…and trending temperatures upwards but from 5-6 days out it was wrong.

To be honest I’m not beating myself up on any of the above…because (again from the perspective of 5-6-7 days away) that forecast was a pretty darn good one. We had a storm…we had rain…we had snow…we had cold…we had strong winds…all well forecast from days out.

Now the elephant in the room. What about the snow forecast?

So this didn’t totally work out obviously. You’re not shoveling…I get it.

So again remember that we were talking about snow and it snowed..I talked about near blizzard conditions…and that almost happened…IF there would’ve been somewhat heavier snows from 10PM-2AM when the winds were near 35 MPH, instead of having 1/2 mile visibility the visibility would’ve been lower and hence your near>blizzard conditions. From 4-5 days out…we were so close but this didn’t work out and we were wrong about that. Now granted the northside of the Metro had this worse than the southside of the Metro in terms of the winds + snow combination.

So the lead-up to the storm from a couple of days ago wasn’t terrible either Remember I started on TUE saying 2-8″ as an initial thought process in the blog to let you know some of my early thoughts. Obviously on the air we never would talk such numbers from so many days out (I did hear about other forecasts though) because to Karli, Michelle, and myself feel that’s crazy to put that stuff out there (but to each their own). Heck I’m probably the most aggressive one of the team and I won’t do it…maybe on Wednesday at 10PM I might have thought harder about it and probably would’ve put out 3-6″.

That too wouldn’t have worked out…really the correct forecast was a dusting to 2″ so the snow aspect of the forecast clearly didn’t work out. Last night as I was in bed at 9PM hearing the rain hitting my window…I knew we weren’t going to get much at all on the south side at least because things were going to end by 3AM (they did) and the snow window was short to begin with.

Remember though what I wrote about for a couple of days regarding the timing of the changeover and how critical it would be to the amount of snow we would get. I showed you the path to 2″ and the road to 6″. Remember how I mentioned that it would have to be pouring down snow area wide by 8PM or so for us to get closer to that high-end number. So there were indications how this could not work out and I was trying to bring those to your attention. Don’t get me wrong…dusting to 2″ is NOT 2-6″…so the forecast was wrong…

It was also right to some extent. Everything more or less happened…everything that was written about almost a week ago occurred JUST NOT TO THE EXTENT. The rain…the snow…the wind…the cold..the falling temperatures (today)…the slicker roads all happened. The 2 biggest “fails” were the snow amounts last night and the cold forecast for Sunday (that aspect was corrected 2 days ago mostly).

Now that I look back on this past week I’m not overly beating myself up too much about it. I’ve done that in the past for some storms (with reason) but this one isn’t doing that to me this time at least.

You may or may not disagree.

Our feature photo comes from Worth, MO wayyy up towards the IA border…population 63 via ‎Danelle Boldt Engel‎ 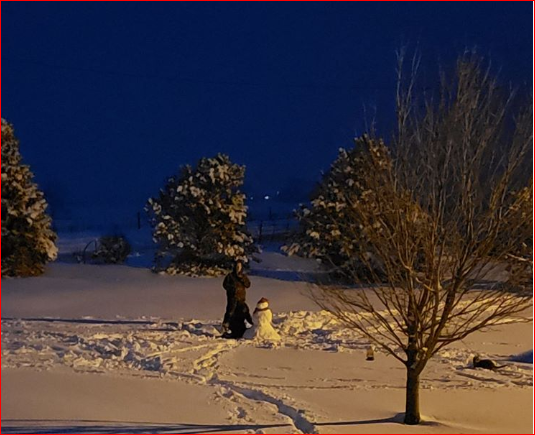