Good afternoon…it’s been a struggle to warm up today…and just like yesterday when we were 3 hours away from a significant snowstorm (Omaha had almost 9″) today we’re about 3 hours away from wearing shorts outside (or close to it). Milder air is sitting to the south of KC right now…but with east surface winds it can’t come to the north.

Tonight: Clouds with some fog. Lows steady in the 30s

Tomorrow: Drizzle developing with highs near 50° but then dropping later in the day.

Saturday night: Drizzle or even some light rain. There may be some thunderstorms towards the Lake of the Ozarks area. Temperatures drop to 32-35°

Sunday: Off and on rain possible especially south of the KC area towards the Lakes region. Highs will struggle around 35° give or take a couple of degrees

Last weekend I was hoping we’d enjoy a day today with temperatures in the 50s…well that hasn’t nearly worked out. A combination of fog this morning and lots of upper level moisture streaming in have conspired to keep a lid on the temperatures today with readings, as I type this in the 30s.

Look how close we are to being in the warm stuff though…just a 3 hour drive away. Here is the 1P surface map showing the temperatures in RED…

I guess we really can’t complain though…we’re still running 10+° above average for December!

Meanwhile some colder changes (for sure) are coming to finish 2015 and start 2016 it appears. Roughly a 7-10 day stretch of chillier temperatures will be in the region as we’ll be more vulnerable to colder shots of air with some Canadian and Arctic connections. It won’t be nasty cold, although at night we may be looking at single digit lows in some areas, especially in N MO depending on the cloud cover situation. And accumulating snow may not be a huge factor in our local area over the next 5 days.

There are 2 systems I’m watching that could change that…one coming in on Monday and another potential next Wednesday.

The Monday storm is really related to the whole change in the weather moving in for the weekend. There is an upper level disturbance dropping into the SW part of the country. You can sort of see it near S UT and NV in the water vapor loop.

Also notice the large swath of subtropical moisture streaming from the Pacific towards the southern Plains and into KC this afternoon.

Anyway that disturbance will drop towards the US/Mexico border over the weekend then kick out towards us heading into early next week.

Still issues with how cold the surface will be (near 32°) + how cold the atmosphere will be just above the surface as well. There there are track issues with the storm itself and as a result still many issues to be dealt with regarding the frozen aspect of the precipitation on Monday. As I mentioned yesterday many things are still on the table regarding exactly what king of precip we get. An all out snowstorm looks unlikely…and all out ice storm is unlikely. Some sort of rain>ice or sleet>to late snow seems most likely. Will the temperature be 29°/32°/34° or something in between…that will determine whether or not we have any travel problems in the region. The EURO model suggests that some may have some persistent sleet>snow while others have persistent rain>sleet.

In a weird way as well, the storm will be drawing warmth in from the east (surface and especially just above the ground) and this may keep parts of N MO more liquid while farther SW there is more frozen precip for a time on Monday

At this point I’m not going to get too into the maps aspect of things…only because that will change so much in the next 48 hours.

It’s VERY important, as weather hobbyists, that you look at the maps on the various websites that you enjoy looking at that information on…BUT ALSO remember to try and look at the soundings for the KC area. These will be critical in determining precip types and get an idea what’s happening with the atmosphere above the surface. The snow maps that the models print out are NOT going to be reliable in this scenario considering the varied precip types that may or may not occur. IF this was ALL snow, that would be one thing…but I’m fully aware of other blogs/forums out there where folks are just taking the models and running with them to places that don’t need to be traveled too. ALSO be vary weary of dry slots that can wrap up and to the north and then west of these wound up upper level storms…

Some of the websites that exceed at getting you the sounding information are NEXLAB (seems to be running a bit slower than usual lately) and also Pivotalweather.com.  Just click on the place you want the sounding to look at. For example here is the NEXLAB sounding for KC for Monday at 6AM 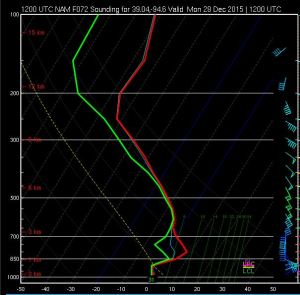 See how that RED line jumps out to the right. IF you click on the image above you will see the #0 at the bottom center.. That is linked to a blue line (isotherm) that goes from the middle to the upper right side. That is the 32°F line. When the RED line is to the right of that 32° line…that means IF there are snow flakes in the clouds, they’re melting. This particular sounding would support mainly rain or some freezing rain or sleet. With temperatures in the 32-33° range it’s something that still needs to be watched for.

Now notice the sounding for 6PM on Monday…look at the RED line (temperatures as you go up in the atmosphere). Notice how it is to the LEFT of the 32° line. Now the atmosphere WILL support snow…but will the storm’s precip be too far away? 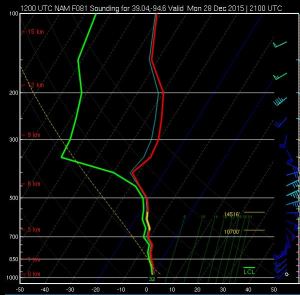 My feeling at this point is that it seems some are working (imagining too hard) a big snow in KC. There are just a lot of things that aren’t looking right to me at this point. Things don’t appear “synced up” to me…certainly some backside snow would be possible in the area…but amounts don’t look overly impressive. I’d be more concerned about some prolonged sleet if anything…and IF the surface temperature is 34°+ it may not be too big of an issue.

After that it’s just cold (not unusual cold) for the rest of the week.

Have a great Christmas and the next blog update will be Saturday afternoon by 2PM.