Good afternoon…another Joe Lauria Top 10 Weather Day…sort of the weather the desert enjoys during the dead of winter when we’re freezing and it’s snowing or raining or something not-so-nice. Temperatures today will max out around 70° and with the deep blue skies and the wonderful fall colors…it really doesn’t get much better. Lots of pics have come in of the beautiful colors.

The weather will sort of be up and down for the next week. Nothing too down until perhaps Friday…when a chillier air mass will briefly move through the area. There aren’t any big storms targeting KC…although it’s still worth monitoring Wednesday and Wednesday night as a decently strong disturbance passes to the south of here. IF this was winter it would be a snowmaker somewhere nearby.

Tonight: Mostly clear and cool with lows in the 40s

Sunday: Winds will be gusting in the morning to near 35 MPH…then coming down after 2PM or so. Skies should be mostly sunny with highs up into the 60s

Monday: Another windy day shaping up with gusts to 30 MPH possible and mild temperatures with highs around 70° or in the lower 70s

The satellite picture today tells the story for me really…

The next weather change is already coming through the N Plains region…in the form of a cold front. Really though the bulk of the cooler air will not make it to us tomorrow and with the strong winds expected through early afternoon (at least) the atmosphere will be rather stirred up on Sunday…that means a lot of mixing and that means we can again warm up to seasonable levels (even behind the front). The winds though should markedly drop off towards the 2nd half of the Chiefs game and the beginning of the SKC game.

Monday the winds will again return as the day unfolds and again with a lot of sunshine…a stirred up atmosphere will be able to warm efficiently…so 70s are very possible again.

We’ll also be ahead of another cold front which will move in Tuesday morning…there may be some rain with the front BUT the better moisture may not arrive in time to interact with a poorly timed morning front to give us much rain at all. Odds favor another minor overall event with this with most again under 1/4″ and perhaps some under 1/10″ of moisture. Not exactly helpful.

The map above are the dew points forecast off of the NAM model. The better 60°+ dews are located towards the south central KS region…they probably won’t make it to us as the front will be moving through towards daybreak.

So I can’t get too excited right now with the rain potential/amounts.

The front comes through before daybreak…so perhaps there could be some minor showers behind the sloped front in the morning hours…then getting better in the PM. IF we get enough PM sunshine on Tuesday..we again could easily pop into the 60s. IF the front slows down, even by 6 hours…there could be a brief attempt at some higher dew points thanks to the S/SW winds bringing in a bit more moisture and hence perhaps a few more showers could develop on Tuesday. A slower solution to the front would also mean clouds and rain chances linger a bit longer keeping Tuesday in the 50s.

Regardless it won’t be much to get too excited about and IF you have some new grass down…some watering would probably be needed.

Cooler air will filter in behind the front…not a lot of chilly air…just some…so Halloween will be cooler for sure it appears but nothing too terrible.

Yesterday I mentioned that I was watching for a possible disturbance or two to move into the Plains. The models are still showing this to remain mostly south of the area on Wednesday so that would mean the potential of rain more towards the I-40 corridor than the I-70 corridor. Should this play out as I expect, at this point…we should be in pretty good shape for Halloween (I guess there could be a brief sprinkle or something in the morning with additional clouds)…as long as everything is moving along in the upper levels of the atmosphere…that disturbance will be forced way down towards TX and then swing up towards the TN Valley region. During the winter this would be a decent snow-maker to the north of the surface low track towards the southern MO area and the Bootheel region. Even with the October date…this might create some wet snowflakes across parts of the deep south only IF there is enough dynamic cooling of the atmosphere down there…it’s tough to get it cold enough in October in the deep south (AR) BUT it’s going to be a dynamic storm as it comes out into the SE part of the country.

I’ve mentioned this a few times already but it was a wet 1st 2 weeks of the month and since then…not so much. We were so wet though that…

Although rain has been the big story of the month…temperatures have been cool by October standards too. Through the first 23 days of the month…this is tied for the 18th coldest October on the 131-year record.

Confirmed via SPC's @pmarshwx:
•There has been no year that has passed with zero violent (F4-F5) US tornadoes
•We are currently in the longest stretch of no violent on record.
•April 9, 2017 (Canton, TX) is the last official EF-4

OK that’s it for today…there’s a driving range calling out to me now so time to practice.

Our feature photo comes from Andrew Huffman of a great sunrise with some valley fog this morning. 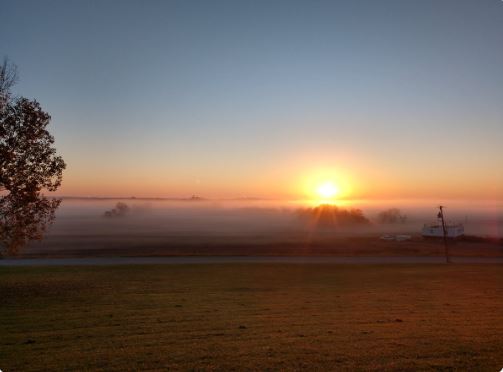 SAND POINT, Alaska (NewsNation Now) — A magnitude 7.5 earthquake prompted a tsunami warning Monday for a nearly thousand-mile stretch of Alaska’s southern coast, with waves over 2 feet at the nearest community as the threat subsided.

The National Tsunami Warning Center issued the warning for South Alaska and the Alaska Peninsula, Pacific coasts from Kennedy Entrance, Alaska to Unimak Pass, Alaska, including Sand Point, Cold Bay and Kodiak, which are sparsely populated.

Texas woman died of COVID-19 while on commercial flight