I’m not sure when there WON’T be another weather blog…because there is SO much weather coming down the pike into the Plains over the next several weeks. These next few weeks may end up being everything that the last few winters have not really been. Prolonged cold, winter storm threats and all sorts of other winter related headaches. The folks up in Weston at Snow Creek will be loving these next few weeks…a lot of snow will get made. They’ll also get an assist from Mother Nature. Meanwhile private snow plow operators will be making more money too. So there are some folks, others too, who will benefit from this major winter turn. Meanwhile a bunch of others will be grumbling about the snow. It’s the ying and the yang of winter weather I suppose.

Today: Gray and cold with highs around 35° and that could be a struggle

Tonight: Gray with some fog. Lows near 30°

Wednesday: Cloudy skies with readings in the 30s. Some light freezing rain is possible later in the day

Wednesday night: A light wintry mix with some freezing rain is likely. Temperatures near 32°

Thursday: That ends in the morning then mainly cloudy with highs in the mid 30s. Watch for that morning rush hour glaze though

There are so many things happening in the world of weather in the region right now. Normally I’d spend a whole blog just talking about how we’re trapped in the low clouds that are out there right now. It’s actually warmer several thousand feet up today than here on the ground. It will be in the lower to middle 40s today up at around 5,000 feet or so. It’s too bad really because with full sunshine and no snow on the ground…we’d be in the 50s this afternoon and the golf courses would be busy for sure. Alas…not going to happen.

Instead we’re stuck in the muck as I like to say. It’s a classic case of what we call an “inversion”. This is VERY common during the winter mornings BUT because of the lack of stirred up air (not enough wind) and this snowcover that is chilling the lowest couple of thousand feet of the atmosphere (where we are) the moisture is trapped. These wet snows are known for slowly (sometimes quickly) melting and contributing even more moisture to the lower part of the atmosphere. It’s sort of an ongoing repetitive process that we need to break from. How do we do that? Stronger winds…or perhaps more sinking air…or a slow erosion of the edges of the clouds…but boy when I see satellite pictures like this…it makes one wonder when the sun will come back out.

Weather issue #1: A weak wave coming through the region later Wednesday into Thursday.

It’s really about what the temperature is at the surface later tomorrow and into Thursday AM. We’re going to be very close to 32° and that will be the issue for the freezing drizzle/freezing mist>rain>even some snow chances. We can deal with the rain but the 1st selection, the ice may be the more predominant scenario for us. It won’t be a lot…and I think the main impacts would be on the roads, mainly untreated surfaces. It won’t last long…but we know all too well how just a little glaze creates the issues on the roads and that’s what we’re concerned with for Thursday morning. Even IF the temperatures are 32-33° there may still be road issues because of the snow cover that exists keeping localized areas/roads a bit colder. So that is the 1st issue to deal with.

Issue #2 will be the increasingly likely threat of a snow storm. accompanied by stronger winds and tanking temperatures. That threat evolves later Friday into Saturday. That is associated with this mess in the Pacific Ocean.

The water vapor loop above is a mess of storms…strong flowing jet stream winds aloft and a few other things! Somehow in all that chaos our model data has been very persistent in creating a new storm that will be a big ticket Plains system heading into the weekend.

So where is our storm. Well I sort of reversed engineered this a bit for you. I want you to look at the following animation…but we’re going from the future to the present. It’s the reverse of what I usually do. Why? Because I want you to see the where the system is that we’re going to be tracking because it barely exists right now. So the 1st frame is valid for Friday evening and the storm is dropping through the Rockies…that’s the storm that will get us. Again this is the REVERSE animation. Let’s see how this works. We’re going up to about 18,000 feet and are looking for the soon to be developing storm. Look at this carefully. I held onto the last frame a bit longer so you can see that what I’m looking at is actually in the far SW Aleutian Islands. For timing…12Z is 6AM and 00Z is 6PM

Why am I doing this? I want to show you the “ballet” of the atmosphere and why things are so chaotic out in the northern Pacific Ocean. There is a LOT going on out there right now. Then you add in the jet stream out there…it’s blowing (at it’s core) at close to 170 knots or over 190 MPH. 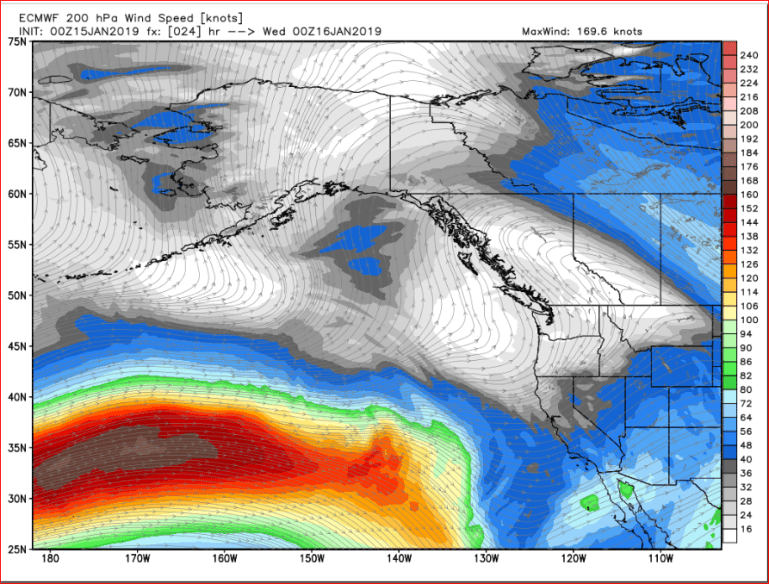 That jet stream will be contorting itself over the next 5 days as well…helping to shape whatever comes our way to some extent, especially though Thursday.

So the storm that comes into the Rockies will come into the Plains…As it does so it will start bring up moisture from the Gulf of Mexico. that moisture shows up when we look at a product called Precipitatable Water or PW. Note how the moisture streams north…the map below is for Friday night. 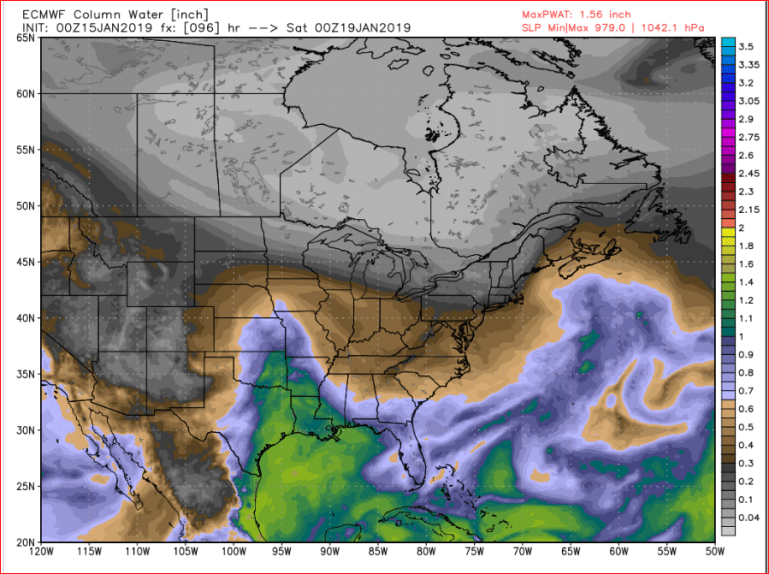 So moisture…check…upper level wave coming through the southern Rockies…check. Now about the arctic air.

Take a look at this…valid for 6PM Friday. These are the EURO forecast temperatures. See the 20s and teens just north of KC? See the sub-zero stuff in the upper Midwest? 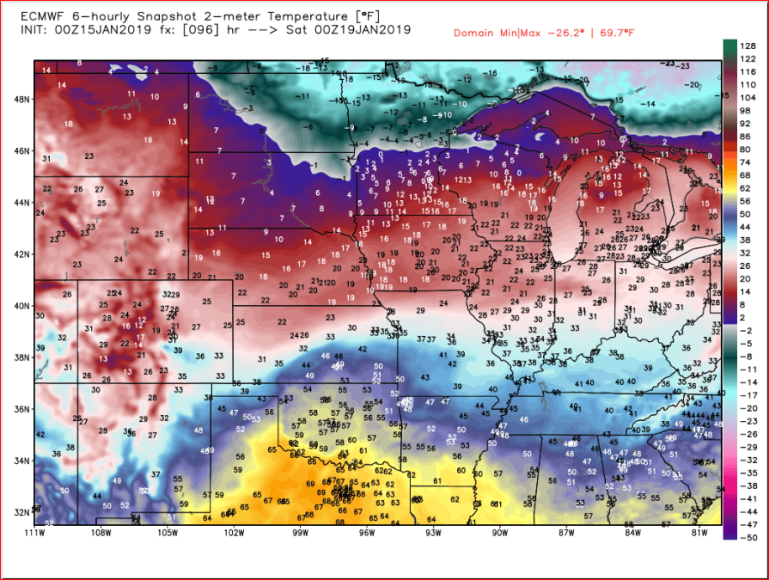 So as that cold air is diving southwards…a surface storm organizes in the southern Plains. Again this map is valid for 6PM Friday. 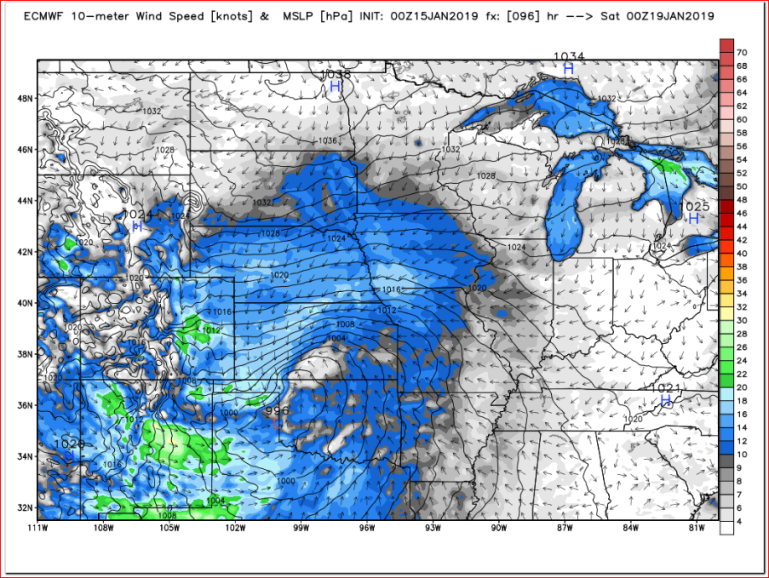 Cold air diving into the circulation…warm air coming northwards into the SE parts of KS/OK/AR…and then spinning into the storm.

So part of this is where will that storm go. Granted it’s about 4 days away…so let’s look at the range of possibilities. This is valid for Saturday morning. 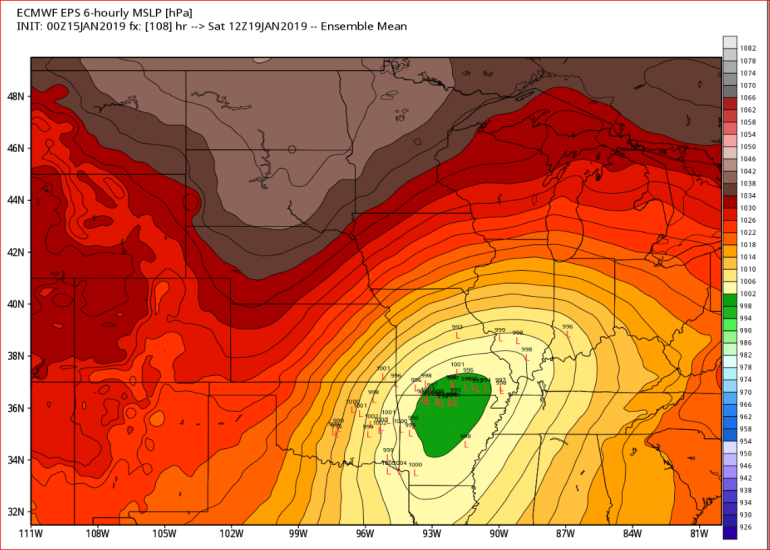 Note all the little L’s. Those are the individual ensemble members (50+). They are averaged out and the colored contours represent the average. So the green in N AR is the center position of the average of all the little Ls. That is a pretty darn good track for a big storm in KC.

Now back to the arctic air diving into the storm from the north. It’s somewhat easier to show it a few thousand feet up…again for 6AM Saturday. 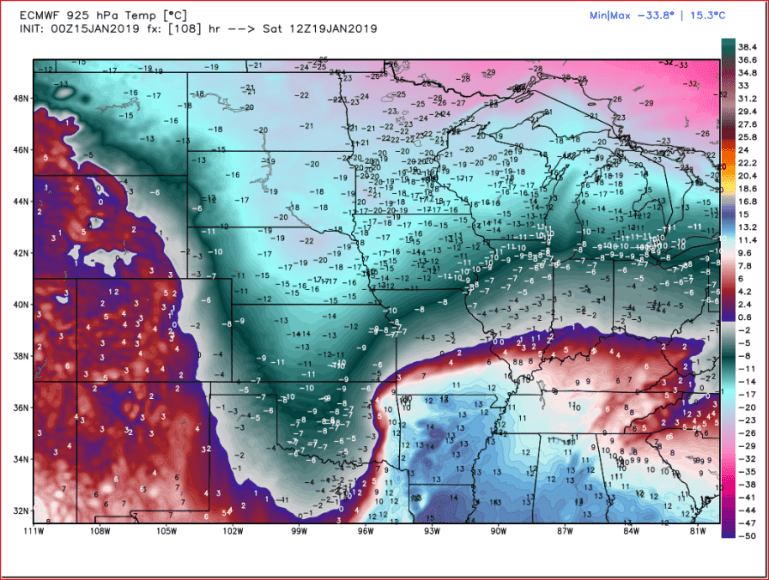 Now we see things clearly. The numbers above at the temperatures at about 3000 feet…in °C. So for example the -8°C temp in KC…is really about 18°F at that level. The +11 temps towards south central MO is really 52°F at that level.

Now remember the moisture coming up from the Gulf. That moisture will be brought up into the cold air and circulated around the storm. That means heavy snow.

So the play out on Friday is perhaps some rain…then a wintry mix…then snow. The contrast between the low pressure towards N AR and the southwards building arctic high across the US/Canadian border will create a tight pressure gradient and wind…lots of wind.

We may be looking at a blizzard again.

I’m not sure when to start talking about potential accumulations…but my feeling is, as a starting point…2-8″.  I may not go there on the newscasts yet…but that’s the purpose of the blog…right? Again a starting point based on the current data and it’s a wider range since this is a starting point…and there is upside to that since the fluff factor of the snow will be much higher this time…that adds up faster. Regardless you’ll have a near impossible time measuring this because of the crazy winds. Our EURO model is cranking out 40-50 MPH winds again on Saturday morning…the GFS is more in the 35-40 mph category…still blizzard condition potential.

Now can we miss this snow. Sure. Can we still get less snow or more snow…sure. Do we avoid the cold and the sub-zero wind chills…NOPE!

Finally…I want you to remember the Chiefs v Titans game back in December of 2016. Remember that? It was one degree at game time. Now I want you to look at this tweet I sent out yesterday.

The surface map comparisons from 2016 (L) and forecast for Sunday (R) are uncannily almost the same…almost to the same surface pressure in the KC region too! Maps via @weatherbell @GregPostel JL pic.twitter.com/t4rWHxuhLj

Look at the bottom 2 maps…virtually the same! The biggest difference is the position of the storm off of the east coast Sunday compared to the NE part of Canada in 2016…but with the strength of the high about the same…it’s reasonable to think sub-zero in the morning and single digits in the afternoon. It’s a matter (assuming we have clear skies) how low it gets Sunday morning. Then how fast we fall Sunday night before the SW winds kick in to slow the tanking. Monday morning could be well below zero again depending on how fast the cold air starts leaving the region.

OK I have to stop now…1500+ words is enough to glaze your eyes over…maybe glaze isn’t the right word though considering the weather coming. :) 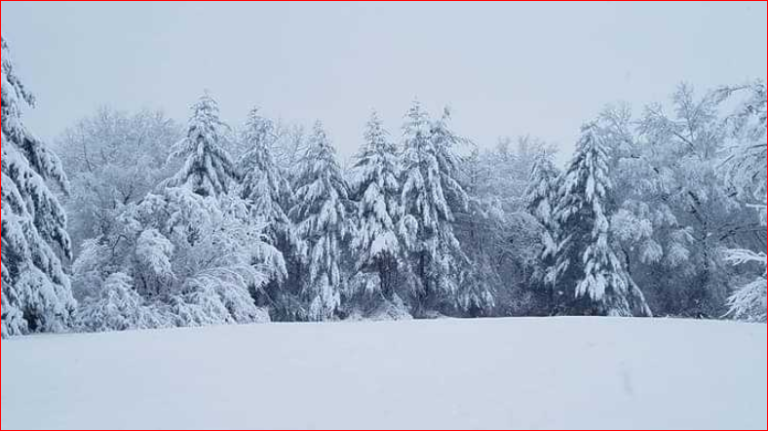