Today: Partly cloudy skies and not as mild as yesterday with highs 50-55°

Tonight: Variable clouds with perhaps a sprinkle? Lows in the upper 20s

I’m getting ready to head out for the St Patrick’s Day parade and I’m reminded of the scene when the cars we are passengers in are making the surn southwards on Broadway to a throng of revelers. In some years the trees (especially the Pear trees) have blossomed out and look fabulous as they can do during the spring season…this year though nary a bud to be found I don’t think.

I was doing some research yesterday and trying to find a way to point out how “grinding” this winter has been, especially related tot eh colder weather. A lot of you are over the cold…which I totally get…but this winter has been a bit strange from that standpoint.

We started the middle of October with our earliest accumulating snow in KC (.2″). Then we had the blizzard on Thanksgiving weekend..a bunch of small snow events…a few bigger ones and essentially no prolonged mildness to speak of except what happened in early December. Our “faux” thaw I guess. Anyway what we’ve been missing this winter is interludes of milder days. So I wanted to investigate that a bit more and see if that adds any clarity.

The high temp at Kansas City Int'l Airport has remained below 65° for 133 days now, which ties a record set in 1912. Based on this afternoon's forecast high of 62, we should break that record today, but it will be close.

This caught my eye…and let’s tack on another 4 days to that by the way…and for that matter add on another few more to that too because we won’t be sniffing 65° for awhile I fear.

I think that table is pretty interesting…as a matter of fact this year…the 9 days of 60° or higher is the fewest since 1993 I believe. Hmmmm what happened back in 1993? Oh yeah…flooding.

Then again…look what happens after the season’s 1st 70° day…on average.

You know for as chilly as it’s been…March isn’t exactly turning into a gangbuster snowy month (so far) in KC…we’ve had 2.8″ which IF it stopped there would be tied for the 51st snowiest March in KC.

Our next system is due in on Tuesday but it won’t rain all day long…as a matter of fact we may try to warm-up a bit as a surface low comes close to the I-70 corridor region.

It’s a weak system overall…and the better moisture may be more towards northern MO…not helping the saturated conditions up there but not having a big effect on the flood situation…and you can see the drop off towards the south. It’s also possible that depending on when exactly we start getting some light precip going early Tuesday…there still could be a few ice pellets/flakes mixed in briefly.

How warm we get on Tuesday is a bit of a tough forecast. We average the mid 50s now…and IF we can get dry weather for awhile on Tuesdya and IF we can get some sort of SE/S wind move into the KC Metro…we could warm-up more than I think (50-55°).

IF it rains all day long…we’ll be much cooler…but there has been a trend for milder weather with the more concentrated rain coming towards the later part of the day.

Beyond that nothing really remarkable overall…at least from a temperature standpoint and use the data below cautiously because we are definitely at the time of the year where these values change a lot. 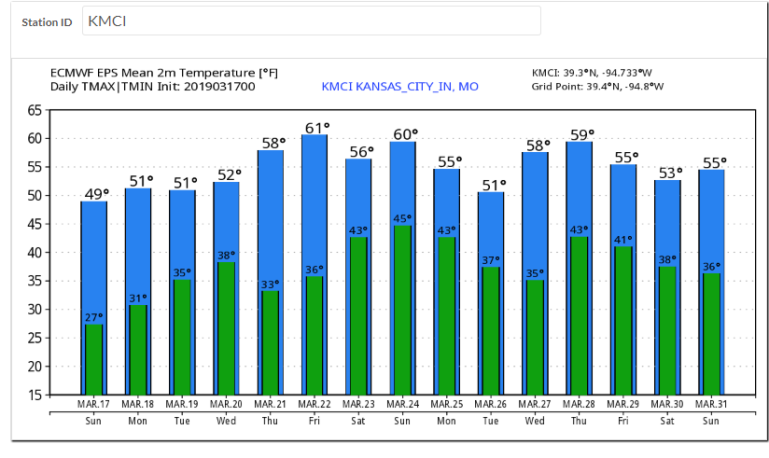 On that note I will mention to be aware of changing temperature forecasts for the next few weeks especially as we start to transition the seasons. The battle between the warm and cold air masses gets more intense now…winter tries to hang on while the daylight gets longer and the sun angle gets even stronger. This time of the year can be rather perilous for forecasting high temperatures as well even 24 hours out. Not that those forecasts are bad…but there is a tendency I think to underestimate potential warmth by a few degrees.

Notice the blues encroaching farther and farther north in the last few days of the animation above…this signals a delay in the typical spring “green-up” that is expanding northbound. Areas towards the deep south are having an early spring green-up though…

There have been years in the past that I’ve written about our early spring green-ups coming up into KC…as recently as a couple of years ago. Last year was another slow green-up for us with the crummy March and April weather we endured.

Speaking of which…the 1st 16 days this month are the 19th coldest start to March in KC weather history. Remember how crummy last March was…well on average through the 1st 16 days it was 10° warmer!!! 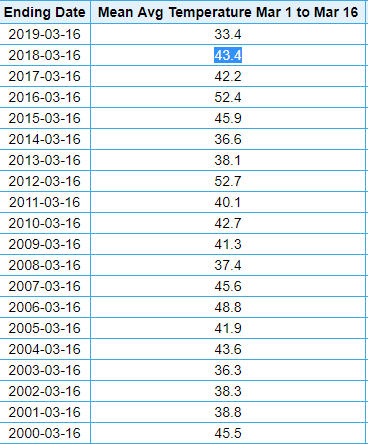 I did a double take when I saw that this morning. We had a lot of 40s though on the back half of March last year…hopefully we can do better this year. 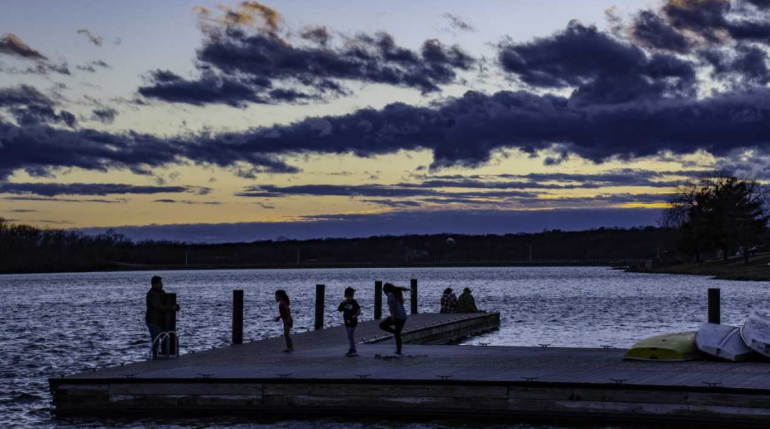 Another cold night is expected with temperatures in the low 20s. We'll warm back up nicely Tuesday before it gets messy Wednesday into Thursday. We start off as rain and change to snow overnight and early Thursday. Little to no accumulation is expected for many, and most of that will be in the grass. We dry out and warm back up into the afternoons heading into the weekend.

A mysterious object is expected to whizz past Earth Tuesday

How to watch out for scams as a coronavirus vaccine nears