The season’s 1st killing freeze is on tap for the area to start the weekend as MUCH colder air is poised to move into the region on Friday. It’s stay though will be somewhat brief as milder air will move back in to finish the weekend.

Tonight: Clear to increasing clouds later in the night and cool with lows 37-42°. North winds increase to 15-25 MPH

Tomorrow: Blustery and MUCH cooler with highs in the 40-45° and north winds of 15-25 MPH. There may be some brief AM clouds but we should be mostly sunny for most of the day. Wind chills will be in the 20s near daybreak and the 30s in the PM. Brrr and grab the winter coat!

This weekend: Hard freeze SAT AM with lows near 20-25° (NWS has issued a FREEZE warning for SAT AM). Interestingly the record low is 20° in 1991. Don’t think we’ll get there but it may be within shouting distance.  Highs on SAT will be in the 40s with light winds and clouds moving into the region from the west. Then temperatures may briefly drop off SAT night before becoming steady and then rising towards daybreak SUN AM. Sunday may start sort of cloudy then we should see sunshine in the PM. Highs in the 50s to near 60°. Note as well the strong winds in play on Sunday with gusts of 30-35 MPH possible.

Well it appears that we will NOT come close to breaking our latest freeze in KC weather history (11/10) as much colder air will be sweeping into the region before daybreak tomorrow meaning that temperatures will be chilly for Halloween.

This will all be generated by an intense upper level storm that will be forming in the eastern part of the country. Take a look at the NAM model showing the evolution of the storm storm as it drops from S Canada into the Great Lakes then down through the OH Valley region into the Carolinas then near the east coast! We’ll take you up to about 20,000′ or so showing the storm’s evolution.

From a meteorological standpoint this will be fascinating to watch over the next 48 hours or so.

Another facet of this storm will be the strong winds associated with it. We’ll be on the western edge of those stronger winds…as I mentioned 15-25 MPH or so,,,perhaps a stronger gust tomorrow. But up towards the Lakes region where strong north winds will be blowing down the length of Lake Michigan the waves will be impressive. Storm warnings are in effect for Lake Michigan and Lakeshore flood advisories are in effect for the land around Lake Michigan. 50-60 MPH winds are possible in the Lake and that will generate 20-30′ waves crashing ashore into N IN and NE IL. 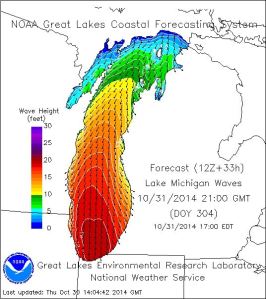 You can see that better with this map showing the temperatures at roughly 5,000′ up in the air…via Unisys

Notice as well that pocket of cold air associated with the developing storm in the western Carolinas…hence the snow concern there .

Meanwhile after a wet start to OCT through the 13th…we’ve really sort of dried out over the last 2+ weeks. So we could use some moisture. A storm off the west coast will be our next opportunity…

That storm will move into the western part of the country on Saturday then move into the Rockies on Sunday and in the process breaks up into pieces. A weakened piece of it will move through the area later Monday into TUE AM and hopefully create some rain. Showers should break out on Monday and then hopefully consolidate into something more solid MON night into early TUE.

The amount of rain however is tough to figure out. Since there will be pieces of the storm to be dealt with, the northern piece will drop cooler and drier air into the region and the southern piece will help the rain situation by allowing the winds aloft to overrun the cooler air streaming into the area early TUE. Depending on how the cooler air pushes south, the location of the steadier rains that form will change. The EURO model gives us 1-2″ of rainfall. The GFS bulls-eye us with over 2″ of rain as well and the Canadian model is in the 1.5-2.5″ range as well for early next week. I’m going to go a little slower on that potential right now…I get concerned that the heavier rain may shift a bit farther south over time as we get closer to the event. At least there is potential though. Almost half the GFS ensembles aren’t exactly overwhelming when it comes to totals on this potential storm. From last night’s EURO ensemble runs…there was roughly a 20-30% of over 1″ rainfall in KC.

Let’s give this storm a couple of more days to evolve and actually get ashore. We should at least get some rain but again I’m not sure about the amounts.

Have a great Halloween and dress the kiddies well for tomorrow…