At 5:45 this afternoon Spring will officially start here in KC…and while we’ll be enjoying nice spring weather here is KC…it’s snowing pretty good again in the NE part of the country…remember we had snow here in KC the last weekend of March last year…when the snow would not stop. Note the severe weather index graphic that is now the featured image for the blog. We’re working on a new concept for this image that we’ll probably get started with in April as spring gets going.

Tonight: Fair skies and not as cold as this morning. Maybe some light valley fog at daybreak. Lows in the 40-45° range with some 30s in the outlying areas.

Tomorrow: Mostly sunny and milder with highs near 70°

Sunday: Warmer with highs in the middle 70s.

Ah springtime…many are thrilled but as we know spring is a transitional season here and you can certainly see rather large storms in the early spring time. Especially from now through later April as the cold and warm air masses really battle for position…things can get active. Finally as May moves along the jetstream moves farther and farther north and the battle of the air masses moves along with the jetstream farther and farther north.

So what exactly is spring…what does it mean astronomically? Well for that here is a short 1:30 min video…talking about that.

The best timing of the storms would be later Monday night into Tuesday (hail and perhaps some high wind threat). Then the next question is will we have another chance with the next cold frontal passage later TUE or WED? Perhaps that opportunity is better towards the south of KC…but it’s still early and again, like I mentioned yesterday, let’s start thinking about the potential of storms/maybe some severe weather by later Monday evening or so…

There is a tough temperature forecast for Tuesday…as we’re going to be trying to warm-up but at the same time, storms will be focused from KC northwards Tuesday morning…

What can happen is sometimes, depending on the coverage of the storms, the outflow of the storms can actually keep our area cooler that what the air above the surface would suggest. Should the storms move away fast enough then we have a better opportunity to warm up…so highs on Tuesday could be 55-60° or they could be 75-80° depending on how things play out…obviously the cooler highs would be less suggestive of a 2nd round of storms in the region later Tuesday night or Wednesday AM.

For the gardeners out there…be aware of frost/freeze potential later in the week next week.

Last night while attending our local AMS/NWA meeting with Greg Carbin from the SPC talking…a friend of mine and I were talking about the lack of strong surface storms (real low pressure) in the Plains area over the past few months. We’ve seen this big storms in the NE part of the country with really strong low pressure centers…but it seems anecdotally that we haven’t had that many in the Plains…this would dovetail into the lack of real organized areas of precipitation that we’ve seen over the last few months as well…and by that I mean the precipitation (whether it be rain or snow) is not as widespread as I’d like to see. Here is a look at the precipitation trends over the past 60 days… 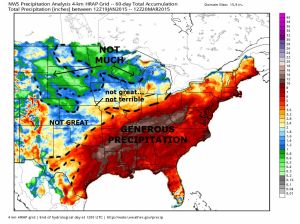 Typically IF there were strong surface storms in the Plains the lack of moisture in the northern Plains wouldn’t be an issue…but it is as you can see. As a matter of fact in yesterday’s drought update…most of MN was placed into a “moderate drought”.

The tan shading is moderate drought while the yellow shading is “abnormally dry”.

Yesterday NOAA came out with their Spring Flood Outlook for the country. They have most of the southern MO under a higher risk of spring time flooding due to the wet conditions down there over the last several months…obviously where all the snow has fallen in the New England area…that’s a no brainer assuming they even get their average amounts of rainfall.

Enjoy the weekend…I may blog tomorrow afternoon, if not certainly on Sunday as the potential of storms increase early next week.

I think I’m going to change the featured weather blog image to severe weather for the rest of the spring…hopefully for those who don’t want any more snow…I don’t have to flip back.