Good afternoon…and here we go again with another very gray day around the area, combined with some mist in patches…it’s just something that we’ve gotten too used to around these parts this month…so I decided to see how cloudy it’s been. See the discussion part of the blog for additional details.

Tonight: Cloudy skies with some mist/drizzle developing. Real rain showers will be moving through parts of the area before daybreak however. Temperatures will drop to near 40°

Tomorrow: Best chance of showers will be during the morning hours. There may be some thin spots in the clouds in the PM hours. Highs should be in the 45-50° range. I should mention that IF we can manage some additional PM sun…there us some upside potential to the highs.

Tuesday: Turning colder with lots of clouds Some scattered flurries are possible. Far N MO may even see some light snow as well. Highs only 35-40° (seasonable).

It seems like I’ve shown you a picture like that a million times this month. Here is a closer in version.

A lot of gray out there for sure.

It’s been one of those months. I went through the NWS data to see just how cloudy these days have been. They assign a 1-10 scale to the “cloudiness” of a particular day. 1 being clear and 10 being totally cloudy. From an 8 on up…it’s considered a cloudy day. This month, including today (and the month is not over) we’ve now had 16 “cloudy” days. So I decided to compare this December and go back for the last 5 Decembers (to 2009) and see how things are looking (and they look pretty gray this month) 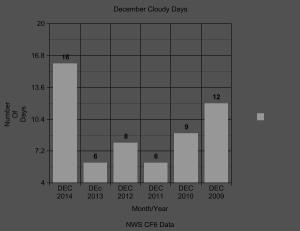 It’s not even close and odds are we’ll tack on a few more this month.

So now that that is settled..what’s ahead?

Changes and plenty of them, but at this point there is now strong storm that will be affecting our immediate area for quite some time. There will be some airmass changes though…and one moves in  Tuesday.

A strong jetstream is going to be moving into the Rockies on Monday evening…this in turn will helpp carve out a rather deep “trof” or U-shaped dip in the jetstream through the Plains region. the map below represents the wind flow around 30,000′ up 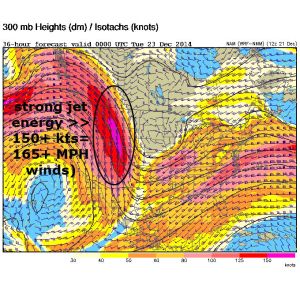 This will progress eastwards over the next 2 days…

At the surface initially a surface low will form in IA…tomorrow and weaken tomorrow night into Tuesday while a second and stronger surface low develops in the TN Valley area and moves up into the eastern Lakes region near Detroit intensifying and turning into a rather strong wind generator. As that process occurs the colder air on the back side of the storm will wrap through the region TUE into WED before moving east (allowing moderation in KC on Thursday). There should be at least some moisture with this wrap-around cold air to squeeze out some flurries or even a few patches of light snow in the region sometime TUE into WED.

By Thursday another wave will move through the Rockies and prompt a new surface low to develop near Denver, CO that will move towards Wichita later Thursday then towards NE MO on Friday. Since this storm is coming on the heels of the previous storm, which is going to drive the moisture so far south of KC…there won’t be time for the moisture to return to our area to give us anything noteworthy for precipitation it appears. This means that the storm will have to work with the moisture that it brings with it from the Pacific. It should end up being a moderate snowstorm for parts of CO and WY and perhaps even into the western Plains (Hastings, NE westwards) but for us it really shouldn’t do much.

As I’ve mentioned though this is being created by a system that is out in the Pacific Ocean (now north of Hawaii towards the Aleutians). It’s a long ways off…IF we could get it to track farther south…we might have a different and snowier late week forecast…but it’s really going to have to come much farther south for that to happen.

The good news about this is ahead of the day after Christmas system…we should see rapid warming (by late December standards) and depending on the sunshine situation (always worry about too many high clouds) we  should pop to near 50° and there is upside to this IF we get more sunshine.

Friday will turn blustery and colder but really just more seasonable and next weekend we should be in the 30s for highs…maybe just a little below average.

That’s it for today…time for some football.

Featured photo today is from @bethansmal showing 3(!) Bald Eagles in the northland. Thanks Beth!