Good morning…after a record setting rain yesterday including a record for the actual date (11/26) and for Thanksgiving itself (since the holiday varies in dates)…today we’re waking up to some freezing rain. Roads have done OK so far but there are some slick areas out there including bridges and overpasses especially from I-70 northwards into the northland.

Tonight: Cloudy skies with some light mist or freezing mist. Lows steady between 30-32°

Tomorrow: Cloudy skies with an occasional rain shower or freezing rain patch or two (in the morning especially). Highs in the 30s.

Sunday: We may have some very light showers out there during the 1st part of the day but overall it looks dry right now for the game. Temperatures again will be in the 30s.

Widespread 1.5-3+” fell through the region…remember a couple of weeks ago when we had a short term moderate drought expanding through the area…not so much anymore.

Rain fell steady and occasionally hard for most of the afternoon and night. Temperatures maxed out at 64° then fell quickly into the 30s. The temperature trace that I’m re-posting is an interesting one for sure. You can see the plunge hit around noon Thursday. This is from IA State. Overall it was a great day to follow the weather…but what a miserable day to be out in the weather.

Temperatures really haven’t changed much since 12AM this morning. we’ve vacillated around 32° for awhile…but now that some areas are closer to 31° (or colder)…we’re starting to see a bit more freezing rain develop. This won’t be the type of event to knock down power lines…but it will be enough to create slick areas on roads/driveways/sidewalks into the afternoon. Obviously be careful out there.

You might be asking yourself…I see the temperature is less than 32°…but why is it still raining and not snowing? The answer is a rather easy one…but the key for you to remember before you put on your thinking caps…is that what happens here on the ground is VERY different as you go up through the atmosphere…

Let me show you what I’m talking about…suppose you got in a special hot air balloon in Topeka today and went from the ground…upwards through the atmosphere. Let’s just say that balloon stopped at around 10,000 feet or so and while you were going up through the air…you were taking temperature readings. Typically as you got above the ground the temperatures would fall off as you went upwards (there are inversions to consider on clear/cool mornings especially) but I’m trying to keep this simple.

This actually happens, without the human touch 2 x’s per day at various places through the USA…about 100 overall. The NWS launches weather balloons to take measurements of temperatures/dew points/wind direction and speeds. This data is relayed back to the ground and then analyzed and amongest many other pieces of information then put into the computer models. This is what a sounding looks like. 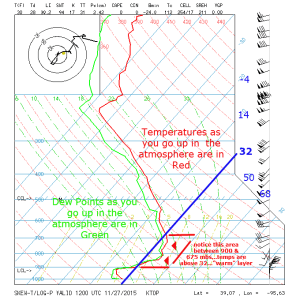 They play a critical role in winter forecasting. In particular watching the potential of freezing rain/sleet and/or snow. The worst is when we vacillate  between all three forms of precipitation. Today though we’ve been pretty consistent with freezing rain.

Here’s why…look at the sounding chart above and notice the thicker BLUE line that I’ve put on the chart. That is the 32° (0°C) line. The thin RED line is the trace of the temperature as you go upwards through the atmosphere. At the surface this morning in Topeka it was down into the upper 20s when the balloon was launched around 6AM (another launch happens at 6PM). Notice as the balloon went up, immediately above the surface the red line went farther left indicating the air was getting colder. Then as the balloon hit about 900 mbs, or about 2700′ above the ground…the temperature trace makes a hard right turn. This indicates to us that the air at that level is warming up, in this case very quickly. Within a few hundred feet the temperature of the air is going upwards rapidly and goes above 32°. It would eventually max out at around 42°. This “warm layer” or above 32° layer of air on the morning sounding was about 5800′ thick. In a nutshell as you go up into that “warm” layer it’s about 5-10° warmer than here on the ground. So even IF snowflakes were to form above us (they can’t today because it’s too warm at the level they would be forming) the flakes would melt as they came to the ground.

In today’s case the rain is falling through that warm layer…in a few cases it has enough time to re-freeze into tiny ice pellets called sleet. In the majority of the area today though the “warm” rain it’s the colder ground and freezes on contact or just afterwards…hence the freezing rain.

Here is the 10AM surface map..the leading edge of the cold and shallow air mass is into SE MO. Notice ahead of the front it’s near 70° while behind it temperatures are down to the teens in NE. 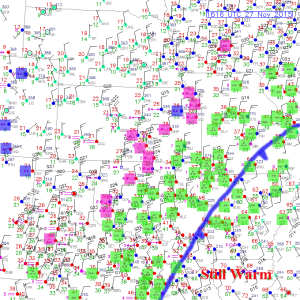 and a look at the HRRR model run…which indicates at the time of this writing, that the precip will start to shut down later this afternoon.

OK…that’s it for today…we’re making the switch from the chances of severe weather index to the snowfall potential index…the number 1 signifies the least chance of 1″ or more in the next 5 days…the scale goes up to a 10 meaning it’s going to happen. Today…it’s a “1”

More near perfect weather is expected in the region for Thursday with some subtle changes bring cooler air into the area on Friday. There is a system to watch for the middle of next week