Well it’s looking a lot like our more typical winter out there…trapped moisture with occasional flurries…this type of weather is common when you have a vast and pretty deep snowpack around the region.

As of this morning…some 67+% of the country is under a blanket of snowcover. With all the cold air in place and the refrigerating effect of the snow…it will be days before we see temperatures above 32°. Last weekend I was wondering when it may be…realizing that we were set up for a long stretch…right now it looks like the earliest maybe would be next Wednesday…perhaps next Thursday…we’ll see. We’ve been below 32° since last THU the 30th. At 7:53 PM the temperature was 33°…then at 8:53 PM it was 31°. Been below freezing ever since then…

What happens is that between shots of cold air coming down from Canada…and another is on the way next MON-TUE and the areas of weird clouds that come about as the moisture from the snowpack gradually melts…cools the air…condenses into clouds get “stuck” in the region…temperatures struggle.

Here is a closer view of parts of the Midwest… So even when the winds turn towards the S or SE which can warm things up…that warmth will be tempered by the fact that the air will be coming towards us right off the snowpack.

What we need is some wind to help the cause…let’s see if that can do us some favors after Tuesday of next week.

As far as the weekend goes…there will be some weak disturbances streaking through the Plains states that may create some snow in the region. Amount at this point look pretty low…it doesn’t appear at this point that the lifting to the air is going to help saturate the levels above the lower clouds …so as a result, there won’t be enough moisture in the clouds aloft to actually create much snow…at least tomorrow.

On Sunday there may be enough lift and moisture aloft to create at least some snow showers/patches in the area…amounts again look pretty light with 1″+ possible in places…perhaps a bit more across N MO.

As far as anything more substantial goes…a another wave (stronger) will be watched on Tuesday…but should slide too far south of the region for much of an effect here…aside from allowing more cold air drainage into the region. Need to watch MON AM and TUE AM for the potential of sub-zero temperatures for at least part of the area…as a pretty strong area of high pressure builds into the region…allowing winds to drop off. We’re still setup for some bitterly cold nights with the snow on the ground.

The EURO model suggests something more substantial later next week…around or just after Valentine’s Day. The other longer term models all have a rather decent wave in that time frame…but the other two models have it up across the upper Midwest…while the EURO has it going to our south…and creating a snowstorm here.

I have no strong feelings either way right now about this scenario…my weak feeling is that nothing strong will affect the area…but confidence in that is pretty low.

The good news about this pattern is that the west coast, especially from Central CA northwards will be in line for some VERY much needed rainfall. Here is the GFS forecast for the drought plagued region. It appears some of the areas in N CA and into the Sierras will be measuring the snow with yard sticks…which will help their cause a bit…need to get some of that farther southwards though to benefit the whole state. How bad has the drought been out there…check out this image created by the NWS in Sacramento, CA 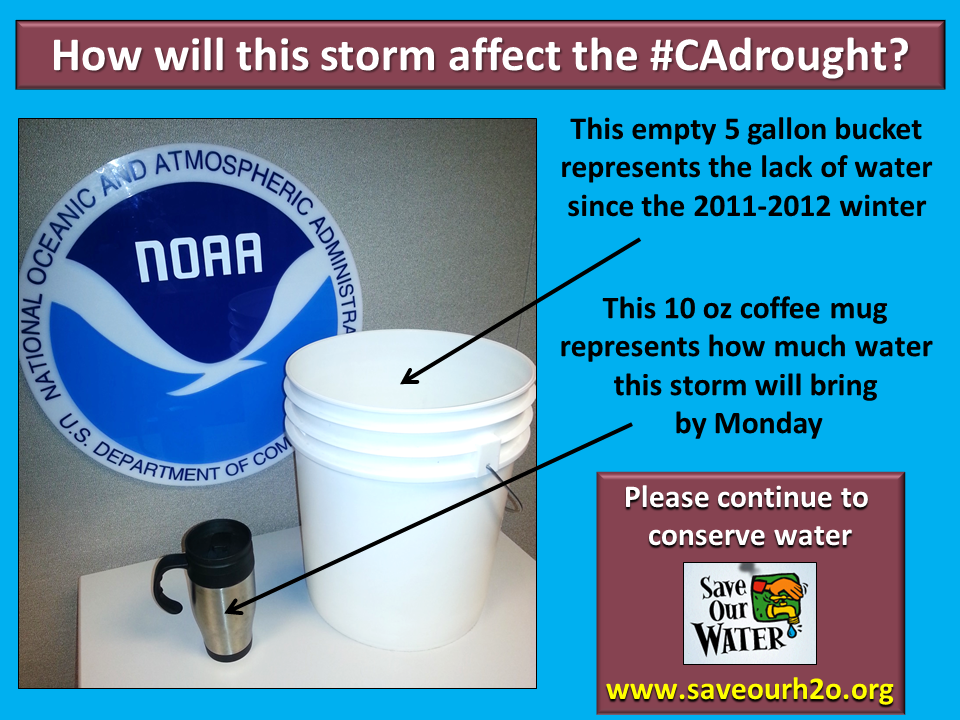 Saw a couple of cute cartoons on twitter this week…take a look!

2/3's of the avg snowfall we get in February could fall on the first day of the month. Forecast @ 11 on midday news. pic.twitter.com/uC28VpjNGv

Yup…sounds about right. One more newscast to go, then a mild coma to follow. pic.twitter.com/JcB3LbESFK