Good afternoon…a rainy and stormy start to the day with some sort of weird hail/sleet combination in the area as rush hour was going. Didn’t last too long but lots of reports about it. Now skies are trying to slowly clear out.

Tonight: Continued clearing with lighter winds moving into the region…with the drier air and the lighter winds temperatures will fall to near 30° in the AM…that means a frosty start to the day tomorrow (gardeners alert)

Sunday: Not as cold in the AM then becoming partly cloudy in the PM. Breezy as well with highs pushing to near 70°. Comfortable but breezy for Sporting KC

Monday (Opening Day): Mostly cloudy with some drizzle/mist or even a few light fast moving showers possible, especially in the AM. Enough sun and we’re easily in the 70s…too many clouds and only around 65°

Overall not too many changes are needed to the forecast for the weekend though Monday at this point. Monday will get more refined as we get closer. The low level moisture coming into the area from the south will be rather shallow (below 4000′ or so) but the potential for at least some patches of drizzle continues.

This morning was interesting as a line of thunderstorms moved through. Since the freezing level was so low, only about 2300′ above the surface or so…there was some sleet and hail mixed in.

Curious how this AM's small hail formed? Here's a model of how it can happen, even in weak or shallow storms. pic.twitter.com/u4RmOu5t7b

So a weird start to the day.

Meanwhile the weather for next week is somewhat problematic and very much unsettled after Monday. All because of a developing storm that will be moving through the western part of the country. It’s located now off the PAC NW coast and will be dropping down through the western US over the next few days. From there it will only slowly come out into the Rockies and eventually through the Plains towards the end of next week. Here is the GFS portrayal of how things play out for the next 7+ days…you can see the storm (here at about 18,000 feet) off the NW US.

This storm will bring some much needed moisture and potentially a LOT of heavy snow to the mountains of CA. Some of the higher elevations may see over 5 FEET of snow…it will help but certainly NOT solve the devastating drought going on out there. Here is the forecast for the next 7 days out there…the onslaught of air off the Pacific running into the mountains will allow the air to rise significantly…helping them out quite a bit. 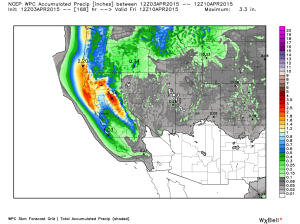 So good for them…and they need it…because that mountain snow-melt is a HUGE booster for the reservoir levels for the state as a whole…and the snow-pack this year is a fraction of average.

For us…the real tricky days with temperature forecast implications are TUE>FRI. A surface storm will be in the Plains and where it wobbles and where various features set up including a warm front of note…will go a long ways in determining what happens day to day. We could get rather warm and muggy TUE…then dabble in the chilly air WED before going back up…or we may never dabble in the chilly air at all…or a surface low could move through on TUE and push in enough cool air so that we’re cooler later in the week. All sorts of potential with severe weather of various kinds, large temperature extremes in the viewing area, and also the potential of heavy rainfall in the region as well…

Finally this afternoon…an astronomical note for KC…tomorrow morning, right before sunrise a total lunar eclipse will be barely viewable (at totality) on the western horizon. It reaches totality 1-2 minutes before “moonset” @ 7AM. It does start though around 5:15 AM…so you’ll be able to see a mostly total lunar eclipse. Sunrise tomorrow AM is at 7AM as well…so that is a weird combination for an eclipse in KC.

Join us for the shortest lunar eclipse of the century happening tomorrow at 6:16am ET. Info: http://t.co/ZH6P83qgU8 pic.twitter.com/UGNXfflPvZ

I’ll be up at Zona Rosa judging the Easter Parade again tomorrow…so I can’t promise a blog update in the afternoon. Odds are there will be one on Sunday though. so have a great weekend and we’ll see you tomorrow on FOX 4 News @ 7AM.