Yesterday was wonderful in the afternoon and after a seasonably chilly start this morning…it’s going to be a fantastic afternoon. With no snow on the ground and with the vegetation still dormant…full sunshine and dry air…temperatures have a way of popping more than what some may think. So as a result, enjoy the next two days…we may salvage the milder weather on Wednesday depending on the timing of the next “speed bump”.

Today: Sunny and mild with highs around 60°. Winds will be increasing from the SW at 10-20 MPH

Tonight: Not as cold with lows closer to 40°

Tuesday: Windy and warm with highs in the low-mid 60s. South winds of 20-40 MPH possible. Clouds may be on the increase as well..especially in the afternoon. Some showers are possible at night (maybe a few rumbles)

Wednesday: Dependent on the timing of our cold front. Earlier…means highs may struggle to 50°. Later means highs may be closer to 60°. Showers are possible…along with some scattered thunderstorms in the “warmer” air

As I mentioned yesterday…we deserve a nice little break in the cold…and really for the next 5-7 days we should be in pretty good shape. Even the front coming through on Wednesday isn’t really all that strong in the big scheme of things. Highs on Thursday will be around 45-50°…pretty seasonable for the 1st of March really.

The front that’s due on Wednesday will usher in the next weather change…and there are questions about it’s timing. IF we hold the front off till the afternoon…we could actually warm up and get a bit unstable. That could create some fast moving thunderstorms. IF the front comes through earlier in the day…no storms but perhaps a chilly drizzle or light rain would be possible behind it. So Wednesday is a bit of a conundrum.

After that we should be fine into the weekend…

Let’s get to a few other things…

Yesterday the weather world was in a slight buzz about what was happening (again) up towards the North Pole region. A surge of moisture and warmth had been sent all the way up towards the Pole.

Believe it or not…we really don’t have weather information readily available up there. Total darkness during this time of the year…plus the fact that the area is encrusted in ice (which moves from place to place)…not exactly a set-up conducive for a permanent weather station.

We typically rely on weather stations in Greenland and also moving buoys on the ice flows to help us get an idea of what’s happening up there. That information is sent to the models and we come up with something like this. I also think there is some satellite observations that are input as well. 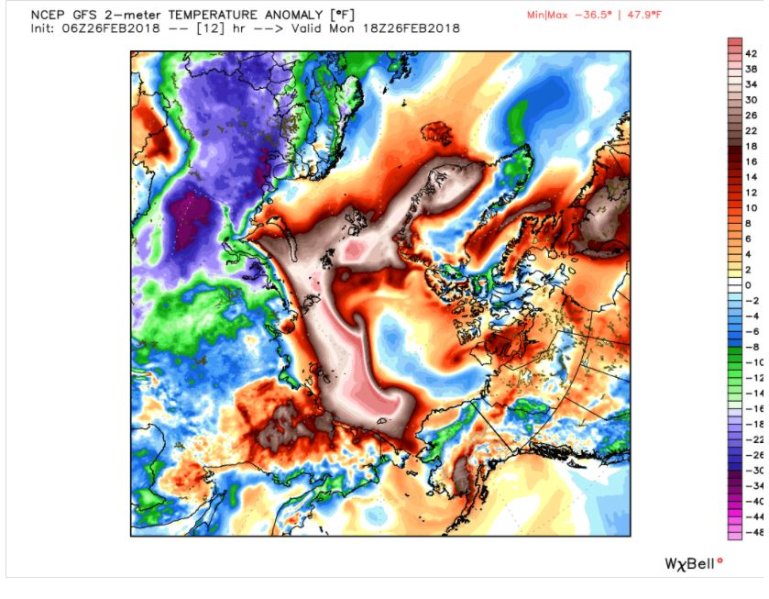 The map above is from the arctic region..and is based of the initialization of the overnight GFS model run. Like all computer initializations this one is NOT perfectly accurate but it’s a pretty good starting point. It takes a moment to get your bearings though. On the far right side is the northern reaches of Canada and the NW Territories. Towards the upper center is the land Mass of Greenland. Then you have Siberia/Russia/China on the lest side of the image. The North Pole is right in the middle I believe. Notice the min/max in the upper right side…this shows the anomalies from the coldest to the warmest in °F.

There are some areas that were running some 50°+ above average…which is amazing considering they don’t get any sunlight at all yet!

I was trying to do the calculations with time zones etc…and there was an observation taken about 450 miles from the actual North Pole yesterday indicating the temperature was 43° in the middle of Sunday afternoon. 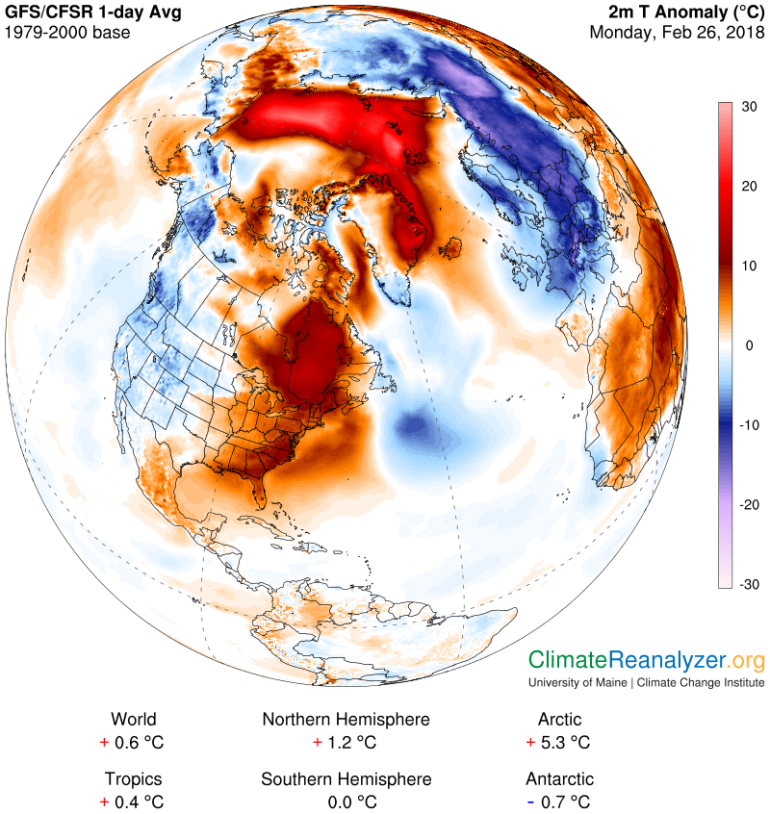 Notice the bottom numbers…showing the Arctic region running 5°C above average this morning…that’s 10°F! For the Arctic as a whole that’s pretty impressive. Notice as well the colder anomalies in Europe…it’s snowing or snowed in Rome today!

The North Pole though has gone through these “warm-ups” through history…a deviation in storm tracks plus blocking atmospheric patterns allows air that is towards the mid latitudes to surge northwards through and near Greenland and towards the Pole.

What I find interesting…is it seems that I’m hearing more and more about this phenomena over the past several years.

Extreme Arctic temperature spikes occur frequently as warm, moist oceanic air arrives either from the Pacific, Atlantic, or thru the Labrador Sea. This chart looks like a heart EKG but highlights the wild winter-time variability in the Arctic w/temp spikes 2004-2018. pic.twitter.com/7jLpGEGyD5

So onto other things…I want to finish my analysis of the data I showed over the weekend referencing two different atmospheric indices that meteorologists look at the NAO and the AO (North Atlantic Oscillation and arctic Oscillation). Refer to the previous two blogs for those write ups.

What I did was analyze the NAO and AO tendencies for 7 days leading up to a the bigger snowstorms since 1980 in KC (verified at KCI). The snow amounts were two day totals so that I covered if the event crossed over calendar days. There are meteorologists who will sometimes refer to these indices as pattern set-ups for snow in this part of the country. So I was looking for a “smoking gun” type scenario to see IF there was anything we could hang our hat on. Again for more of an explanation of this see the previous two blogs from Saturday and Sunday. 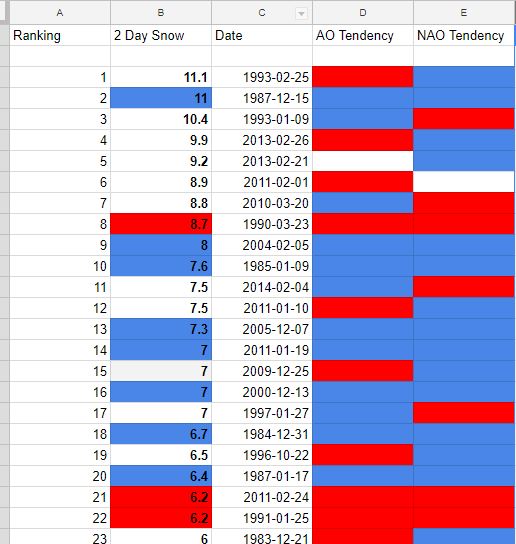 The chart above is a combination of the weekend data. When you see a BLUE box…that refers to a negative AO or NAO value…the right side columns. On the left side…the snow total column shows the what the data showed. For example where  you see a blue box on the left…it means that the AO and NAO were both negative leading up to the snowstorm. When red…it means positive…when right it means no clear tendency between values.

There are 12 white boxes (no or split tendency) and 8 blue boxes. So really the no/split tendency is won more often than the negative tendency of the index values. There is an interesting 3 red box showing indicating that when BOTH values are positive that while you can get a snowstorm…the odds aren’t as favorable for 6″+ totals. Again the tendencies for each value (AO/NAO) are for the 7 days leading up to the snowstorm.

Anyway I think a nice little science project. I’m going to send this information to my colleagues at the NWS to see if they have any feelings about the data. 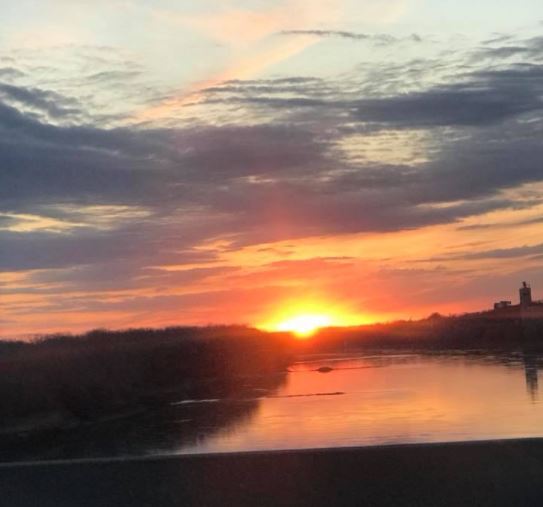