Happy Thursday! This will be the last blog till next week as I will be occupied and won’t be able to get anything together over the next few days. I’m hopeful that when I’m blogging again on Monday that we’ve had 1-2″ of rain in the area…maybe not for all but for at least some…and perhaps many. The set-up remains…and continues really through the middle of next week…

The overnight rain was on the meager side as usual. Amounts were mostly under 1/4″ or so as the front moved through. Temperatures yesterday peaked at 91° up at KCI…impressive and windy too with gusts to 47 MPH.

Today cooler air is flowing into the region. as I start this blog temperatures are 40° cooler than yesterday’s highs and it’s going to be a struggle for us to warm up a lot for today. Odds are we’ll stay in the 50s for most of the day and perhaps nudge 60° with enough sunshine this morning. There is a lot of cloud cover building across the Plains, most of it the low level stuff and that is coming our way today…so it may get very gray as the day unfolds.

The clouds that you see across central KS are moving this way…there is mostly clear weather early this morning across NW MO and NE KS…so we should have some brighter skies for awhile this morning at least. Let’s see how long it holds on before the encroaching clouds play a role in keeping temperatures lower this afternoon

The morning surface map shows the front now south of the I-44 corridor and has about stalled. 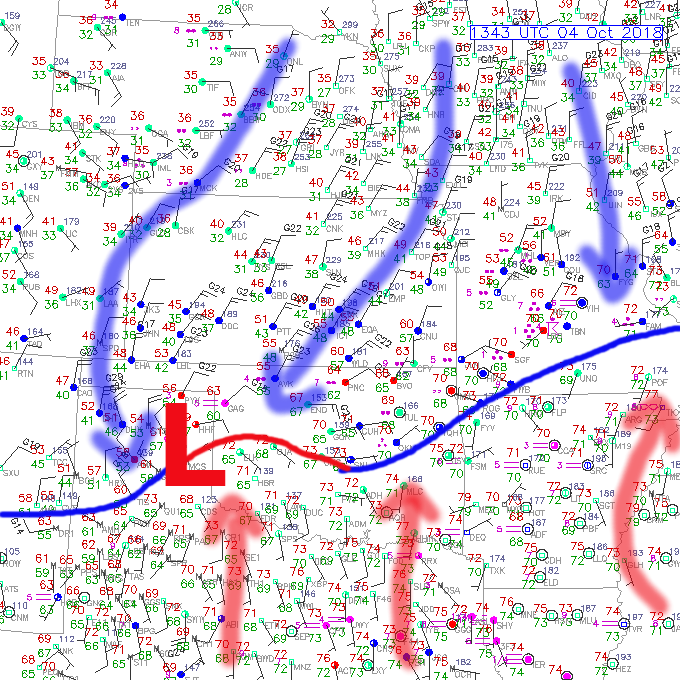 Tonight the front will start coming back northwards as a warm front. Note that south of the front now…it’s about the same air mass that was with us yesterday (minis the wind). It’s warm and humid and that warm air mass may again come back into the region tomorrow, especially in the afternoon. So another pop into the 80s is very possible tomorrow (Friday) assuming the front moves north of KC in the afternoon.

The issue really for Friday is how far north that front actually gets. It wouldn’t surprise me IF we have some light rain or something in the region tomorrow morning for while as the front moves back northwards. We’ll be vulnerable to something until the front moves north of KC Friday.

Then on Saturday another front (a cold front) will cross through the the Plains and move through the regio. Rain and some storms are possible with the frontal passage so a soggy start to the weekend is likely. This next front will just get through the KC area and stall out. With the winds above the front blowing from the SW>NE…this is a classic overrunning set-up and should help continue the rain off and one through the day it appears. So Saturday is not looking so great with all the great outdoor things happening…including about a bizillion Octoberfests!

The front will just sort of hang around all weekend long…so Sunday is a bit dicey as well. As the overnight low level jet stream develops…more rain/storms will develop Saturday night in the region…and may impact Sunday AM too. This brings rain potential to the game on Sunday. It’s not set in stone at this point though, but at least some showers for tailgaters and perhaps even for the game itself are possible.

The Monday and Tuesday we go back into the warmer air…and there may be a bit of a lull in the rains in the KC area and points east. It will also be warmer and muggier again. Not to the degree of yesterday but perhaps near or above 80°.

The main “storm” will come through on Wednesday it appears So additional storms are possible along with some locally heavy rains.

Overall the potential for 1-4″ of rain continues in the region through the middle of next week with some higher amounts possible. There really hasn’t been any significant change in those chances which is a good thing and after that rain on Wednesday the pattern overall looks to be cooler for at least a few days.

So the weather gyrations will continue as the typically do in the fall season in October.

Almost all of KS is in good shape…but that persistent area in the NE quarter of the state has been persistent.

So no doubt many are hoping that these forecasts off the EURO and GFS are going to be close…EURO may be overdone a bit though. 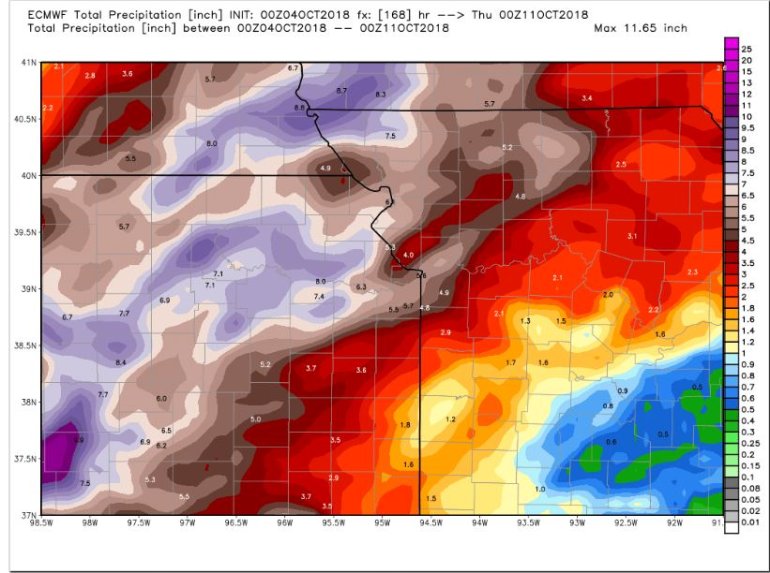 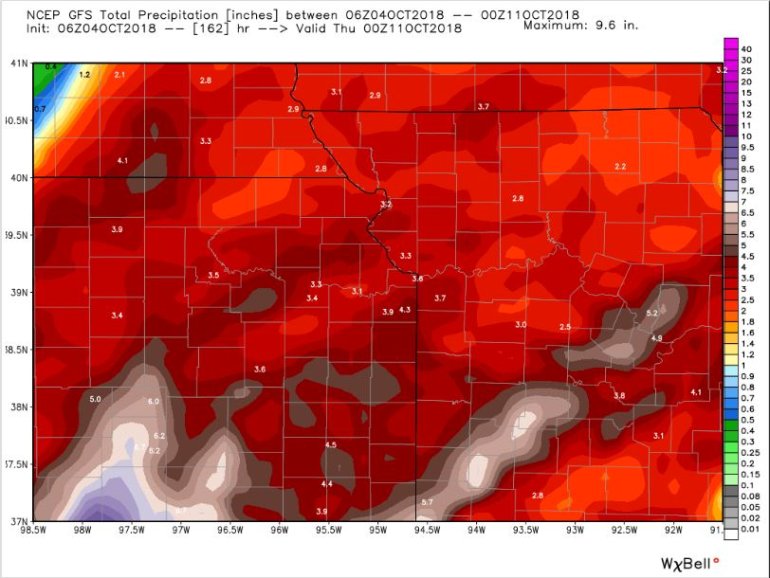 Speaking of the GFS model…it goes way in late January of 2019. It will be replaced by the FV3 model which will then be renamed the GFS model. The results of this new model (I read the report yesterday) are at best mixed.. There are some mild improvements but a whole lot of little improvements in this model iteration it appears. Here are the thoughts from my colleagues in the middle US. 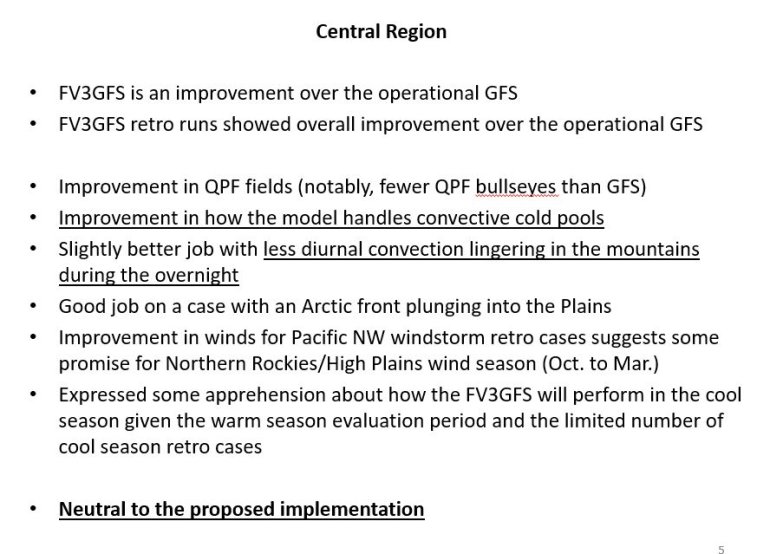 That does it for the next few days…have a great weekend and I’ll see you again on Monday.

Last note…the Downtown airport dropped to 69° late yesterday evening, dropping below 70°. This means that the record for most lows 70° or above in Downtown KC remains tied in 2018 with 1934 I think…a total of 84/year. We’ll see if we try and break it again early next week.

Today marks the 1,961st consecutive day without an F5/EF5 tornado in the United States. Currently ranks as the second-longest streak since 1950. pic.twitter.com/hqjpKz6k17

Here is a look at the average first frost or light freeze for the state of Missouri. Above normal temperatures are forecast through the next pic.twitter.com/fC75j5J7q1

Our feature photo comes from people of Cowtown. 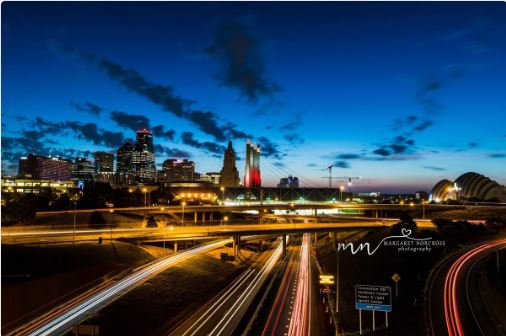 150 million rapid COVID-19 tests to be distributed to all U.S. states

Highs will be a bit warmer today near 70 degrees, but it's still a few degrees cooler than typical late September weather here in KC. However, it's still really comfortable outside this afternoon as the wind has calmed down some compared to yesterday. Another front is scheduled to move through tomorrow, but no rain is expected from that. Our next wet day may be Saturday, as a weak low pressure system will be working with some more moisture in the atmosphere. We are tracking the rain chances and a possibly frosty Friday morning, right here!

Our dry spell has reached 15 days...and there it will stop. Today it will rain at some point as a front comes into the area as the day moves along. The winds, as I type this blog have switched towards the north in north of I-70 and that's the sign of the front. The cooler air is lagging a bit though...and once the rain gets going the temperatures will drop off into the 50s! Pretty good turn-around from the 90° air yesterday.

Yesterday was the 8th time we got to 90° on the 26th of September...so it only happens roughly once out of every 16 years or so...on that date at least. Winds we're gusting all day to about 30 MPH as well...so it was a hot one...it appears that may have been the last 90° although we can still get pretty close ahead of fronts coming into the area.

Saturday was the 39th 90 degree temperature of the year.  Don't expect to see that anymore the rest of the year as significant changes are on the way for Sunday.  We'll start out milder but a few showers and storms develop early with even some smaller hail possible later in the afternoon.  Let's get to the changes. When you wake up early Sunday, it's going to be pretty mild.  You…