Good morning…and the change has happened. The forecast from the weekend is playing out to the hour almost perfectly. It was nice and mild till about 5AM or so on the northside…and then the front came in and temperatures have dropped some 25+ degrees in a couple of hours. There has been a bit of drizzle/freezing drizzle too that shouldn’t last too long. The bigger issues is that this air mass has more bite than many think (those that only look at models) and that that increases our ice/glaze concerns Tuesday into Thursday. Remember a small amount of ice with colder temperatures (20s) creates slick conditions and that’s what I’m concerned about.

Today-Updated: Clearing skies and cold with highs this afternoon only in the 20s to near 30°

Tonight: Increasing clouds and colder with lows in the 20-25° range.

Tuesday: Winter Weather Advisory in effect for the afternoon. Increasing clouds and a chance of some light freezing mist or freezing drizzle at times. Highs 25-30°. Slick conditions may develop, especially on untreated surfaces.

Wednesday: Another chance of more freezing rain. This may be more significant BUT there is a question of whether or not it will be freezing rain or liquid rain. We’ll be close to 32°…more on that in the discussion.

Oh my goodness…what a change…it was expected and it was talked about ofr days…but it’s a cold slap in the face this morning. Here is the data from KCI. 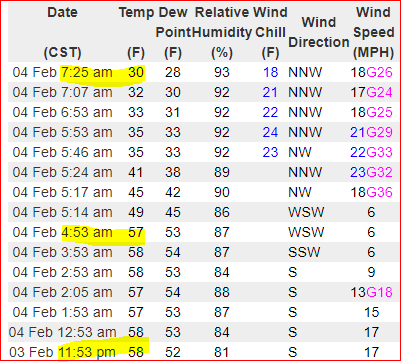 When the day is done and years from now this will a warm day in the books. We were 59° earlier this morning and that was the high today…but in the present…we now feel the day differently and it may not get much better this afternoon.

Last night, I know a lot of you were watching the Super Bowl, I was watching the data because I noticed that the model solutions were’nt cold enough or strong enough with the push of cold weather coming our way. I want to show you what I”m talking about. Note this forecast off the NAM model for 6AM this morning. 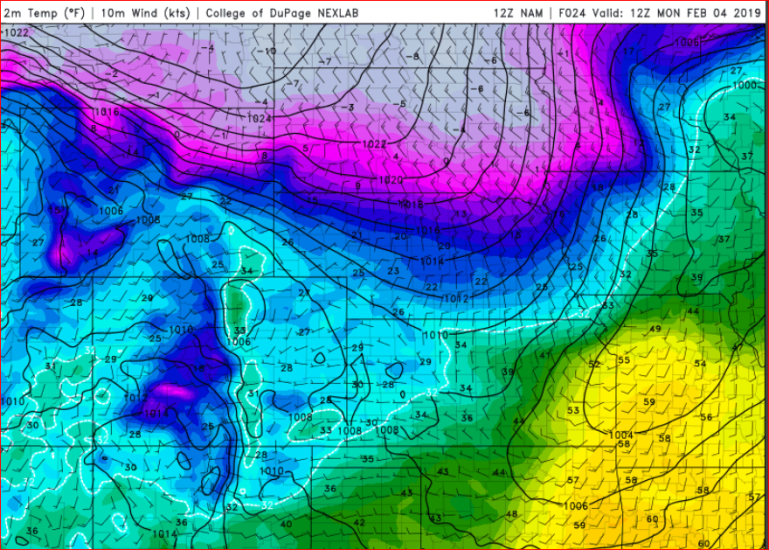 Especially note the temperatures in NE…where the model THINKS were going to be in the teens in northern NE to the mid 20s in southern NE.

Now look at the 7AM reality check… 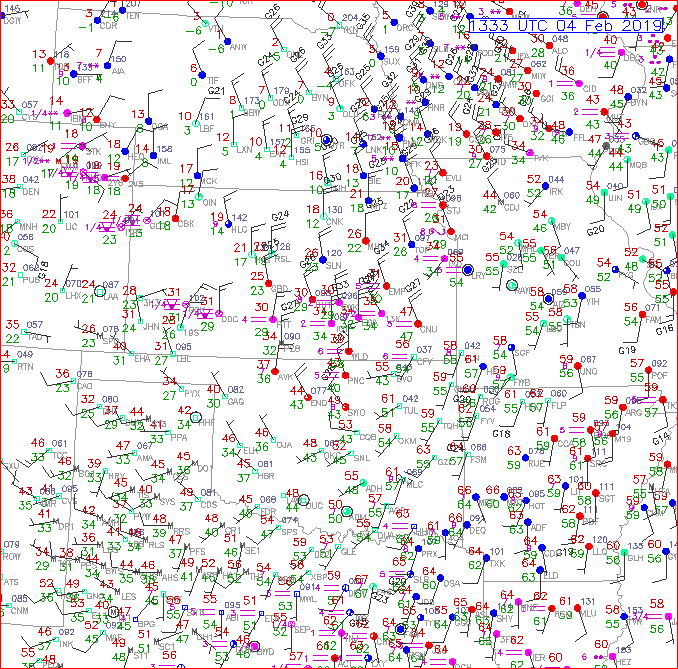 I see teens in southern NE and single digits in northern NE…that’s pretty significant and tells me that the model data isn’t recognizing the coldness of the air mass coming our way…and judging from the latest HRRR model which should have a better handle on things…they still aren’t “seeing” the power of this cold air.

I don't know what your weather apps are forecasting for Wednesday BUT odds are IF they're strictly/mostly based on the GFS forecast they will be wayyyyy off and wayyy too warm. GFS on the left for Noon Wednesday vs NAM on the right. GFS stinks at low level cold air. JL #fox4kc pic.twitter.com/IRV0DmJ3hx

That has implications for Tuesday. Why?

Well there are some models showing the chance for some VERY light precipitation to move into the area at some point. It would be VERY light BUT what kind of precipitation would fall? That’s the rub because some of the “warmer” models suggest it would be rain…while I feel the better chance is of a light glazing type event to occur. IF the models are underestimating the power of the cold air now…are the carrying  that through into Tuesday…and perhaps Wednesday too (when something a bit more significant could occur)?

I definitely feel they are for Tuesday…I think tomorrow we struggle in the mid-upper 20s. Light freezing rain when the temperatures are 29-32° isn’t terrible for the roads…but you take those temperatures a few degrees colder (which I think is more likely) and IF something falls it could be more concerning. It won’t be much at all BUT a little goes a long ways, especially on untreated surfaces…so that is item #1 tomorrow.

Then on Wednesday we are going to be on the hairy edge of more icing. The cold temperatures of Tuesday (let’s say around 27° or so on the northside at least) won’t change much Tuesday night…let’s say down to 25°. Then on Wednesday is somewhat still sketchy disturbance will come up towards the area from the WSW.

This disturbance will help to generate more lift. Did you read yesterday’s blog? IF not, do so as I explain the process of overrunning. Here is a diagram I showed though…

The cold air mass will be down south of the area…milder winds several thousand feet above us will ride up and over the colder and denser air mass and transport lighter and warmer (and moister) air above the colder air mass that’s stuck here. This ongoing lift will saturate the atmosphere and IF there is enough of it generate some light icing. Again since tomorrow there isn’t a disturbance helping to enhance that lift…it would be VERY light (but perhaps still impactful). Think of it as almost a black ice type of an amount…it won’t be much but it bears watching.

UPDATE: Interesting trends this morning with the push of cold air into the Metro this morning…it’s even stronger. we’re down to the mid 20s at noon…that’s about 10° colder than I thought yesterday. Now it makes me wonder IF the risk of minor glazing on Tuesday still exists…perhaps that will be farther south as well. Something for me to ponder for tonight’s update.

There may be a disturbance on Wednesday though…and that adds into the issues because IF we still are below freezing for it’s impacts then we could get more icing…perhaps more significant in amounts, and that could lead to more ice scraping. Is this a set up on Wednesday for a huge ice storm where the power goes out etc…NO. Could there be more glazing than what happens tomorrow…YES. Could there be more impacts to untreated surfaces…YES. Again this all depends on us getting into a more pronounced area of lift. IF we don’t then we may have another day with some light glazing at times…

Temperatures on Wednesday will be critical and IF we can manage 32° or a couple of degrees within that number the impacts won’t be overly high locally. I talk about this all the time…for bigger impacts here (especially during the daytime) we need to have the temperature closer to 28° or below. That’s when we see more of an impact on the pavement etc. It’s on the table BUT we may be just warm enough to avoid the worst icing. We’ll see and it’s changeable.

There are a LOT of issues happening here. The air above us will be in the 40s…the air nearest the ground will be colder. Will whatever falls help to chew away (since the raindrops are warmer) at the colder surface air? Possible…and perhaps this happens. There are a lot of microphysics that happen when warmer rain drops chew on colder surface air and/or hit the colder ground. A lot!

Meanwhile IF we have issues on Wednesday it would be more later than earlier in the day I think. That then leads one to wonder IF we can get the pavement temperatures above 32° with it being daytime. This is very possible as well. So the event may be more of an exposed surface thing than a pavement thing. Again there are a LOT of variables here and the actual temperatures will be critical to what happens in the end.

One thing for sure, at least through Wednesday we’re looking at either ice or liquid and not snow (of any consequence). Again the air above us will be well above 32° so there won’t be flakes making it to the ground.

Again it’s all about the surface temperatures…

Here is the NAM model this morning…showing temperatures at 6AM Wednesday.

Note that large contrast from AR to N MO…more than 40°!

Now lets go up to about 5,000 feet…same timeframe.

That’s close to 50° up there in KC! NO snow with that look. Not even a chance really.

Graphics above via Pivotal Weather.

My opinion is that the colder forecast…maybe closer to 30° is the right one here…IF we have something falling from the sky…into cold air…there will also be some evaporation. We’ll have a northeast wind during the day…I just don’t see how we get above 32° right now. The GFS forecasts are insane in my opinion from last night.

IF you see a forecast for highs to be in the 40s on Wednesday…in my opinion that forecast is around 10° off and perhaps even more. Folks REALLY need to stop using the GFS model, especially in these low level cold air mass scenarios. The model typically is horrendous in this situation. I could get on my even higher horse here…but I won’t.

If I’m wrong about the 40s on Wednesday I’ll admit it then…but I like my chances.

IF we get snow at all (still very iffy) it would be on Thursday when we eradicate the warm air aloft during the AM hours but by then the storm that will be created to the south along the boundary will be moving towards the St Louis area…and it may be too late to get much at all…we’ll see about that timing but temperatures on Thursday will be dropping again during the day I think).

Wow that’s a lot of blog today! Our feature photo comes from Wayne Brock out towards Buckner, MO from last night! 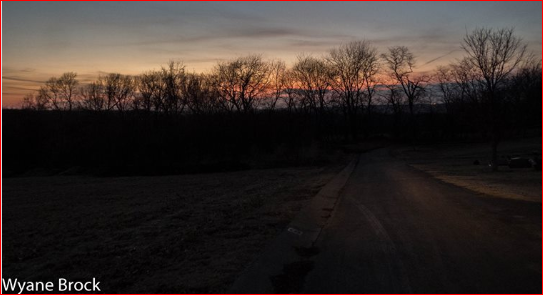