Good afternoon, temperatures are into the low to mid 80s in the area and we’re running about 10° above average for late September. That’s been a trend all September long. We’ve only had 5 days with average temperatures that were below average in KC this month thus far…and it appears that we’ll be above average every day for the rest of the month as well.

This weekend: Overall sunny but we may have a few more clouds in the area on Sunday. Highs this weekend in the 80-85° range with lows at night 60-65°

Yesterday I wrote extensively about the supermoon + eclipse that are going to happen together on Sunday night in KC. It’s rare for both astronomical events to happen at the same time…here is that blog link.

Meanwhile from a weather standpoint…it’s interesting to watch what’s happening in the Plains today. West of KC, as close as Topeka, there have been showers in the area for most of the day. This is connected to a spinning system that was a tropical depression down in the Pacific last weekend, and has migrated into the Plains and now is slowly moving west and southwest and actually pulling the clouds and the rain with it and moving away from KC.

There are actually 2 rather distinct features, one is in the southeast part of the country…producing wet/cool conditions in the Carolina’s and the other is the feature that I just referred too…you can see both on the IR satellite loop via Rutgers University.

From a radar perspective, it’s been a wet day in parts of the Plains…

You can clearly see the rain rotating around the center of the circulation in southern NE south of the I-80 corridor.

The following surface map shows the temperatures in RED…clearly you can see how that storm is creating a wide variation in temperatures in the region. We’re in the low 80s or so…while NE is in the low-mid 60s under the clouds/showers.

We also have a persistent east flow of air into the weekend…IF you look at the numbers in GREEN…you can see the dew points are lower just east of the state line. It wouldn’t be surprising to have some drier (more comfortable) air sneak into the KC region with this persistent flow.

Overall though as I mentioned about 10 days ago, the last week of September and into early October continues to trend towards the warm side. There will be a cold front sneaking through the region on TUE/WED…maybe even some scattered storms with the front later TUE in the region.

Whatever southward progress that front makes though will not be all that important…we should see drop in temperatures, perhaps to more seasonal values for a couple of days (70-75°). We’ll see if we can get enough cooler air to flow our way for that to happen.

Meanwhile as I mentioned at the top of the blog, our warm September continues…so far through the 1st 24 days…this is in the top 30 for warmest Septembers in our recorded weather history. 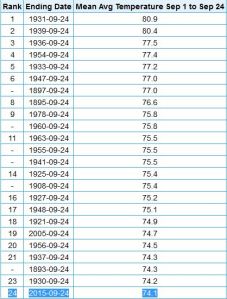 That’s about all I can think of to write about today have a great weekend. There may not be a blog tomorrow since the weather isn’t really noteworthy to write about in the KC region for now. I’ll get an update out on Sunday though for sure.

Snow showers are moving through the area this morning. With the cold air in place, this light snow will be sticking and could create a mess for the morning commute. Pad in extra commute time! The snow winds down and we are stuck with clouds and cold temperatures. Just wait till you see the morning lows on Thursday in the updated forecast here!