Man…one of these days..we’ll have a few days of no active weather…but that isn’t over the next 4 days. Temperatures today have recovered into the 30s and I was expecting a fast recovery with above freezing temperatures and that’s exactly what’s happening out there. Roads have gotten much better and really all they need is a plow and some sunshine hitting the pavement and the snow will quickly melt. Watch for some refreezing tonight though.

Our next storm…storm #4 is coming this weekend. It will be a vigorous one…the strongest of the 3 so far as a matter of fact. That, in itself doesn’t mean a lot right now…but the system bears close watching because while we’ll warm up ahead of it later Friday into Saturday AM…there is going to be a rain switch to snow nearby. The potential for accumulating snows will again develop and the issue is is it here northwards or north of KC (and not by a lot it appears). It’s far too early to cancel or expect the worst from this storm…this will be refined and massaged…we’re talking about 100 miles from not getting much or anything…to getting more than what many want to see at this point of the winter season.

Tonight: Clearing skies and if the winds drop off there may be some fog out there. Temperatures won’t be overly cold. Lows in the mid 20s or so.

Thursday: Better and somewhat milder with highs near 40°. Some upside too.

Friday: Clouds increase and that may stall a warm-up for the day…lets go pessimistic and call for highs in the upper 30s. IF those clouds (they will be low stratus type clouds) don’t materialize…we’ll be warmer.

This Weekend: Some rain on Saturday with a snow changeover possible sometime later in the afternoon with some snow possible in the evening. Again this is very subject to the storm track of storm #4. Regardless at some point we’ll have falling temperatures too. So OK in the AM then colder. It will be colder on Sunday but likely dry.

Overall the system was pretty well forecast I thought. Widespread 2-4″ totals around the Metro with some higher pops in a few areas of the KC region. The heaviest was into northern MO and the lower amounts were accurately predicted towards the SE/S of KC. Nobody was surprised by the lack of snow or vice-versa. 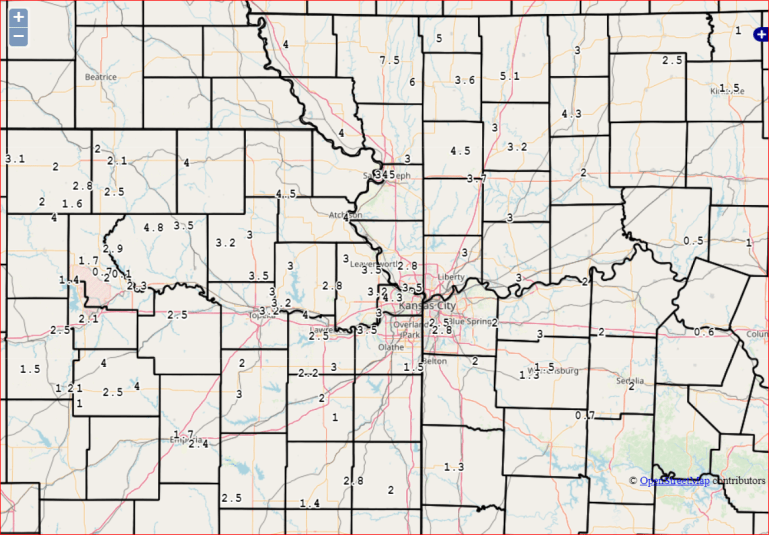 It took awhile for N MO to get in on the party but in time they did. There was some more graupel as well as some freezing rain/ice, especially SE of KC. The dreaded dry slot made an earlier presence though. Those things always seem to move in faster than models suggest. I wrote extensively about this last weekend. It even came faster than I thought. Also of note was the “fast and furious” rates of snow that were well forecast I thought. When it came…it snowed hard!

Here are some specifics… 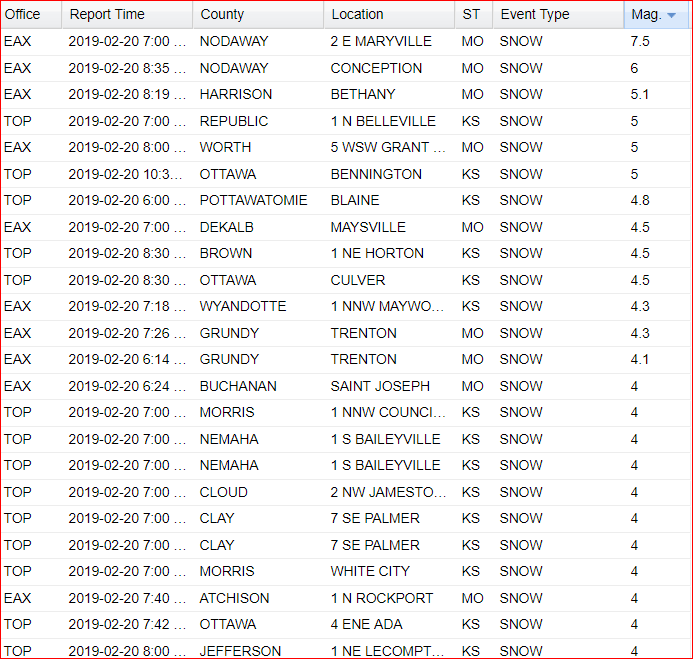 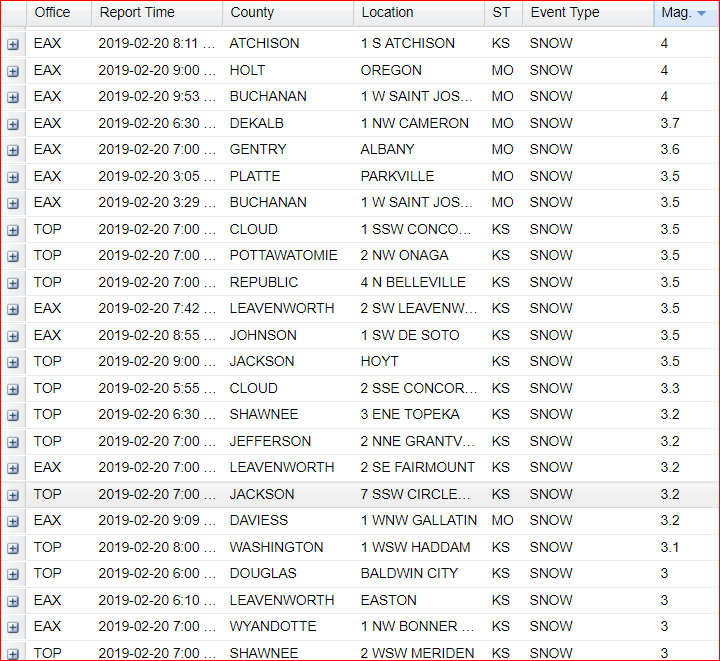 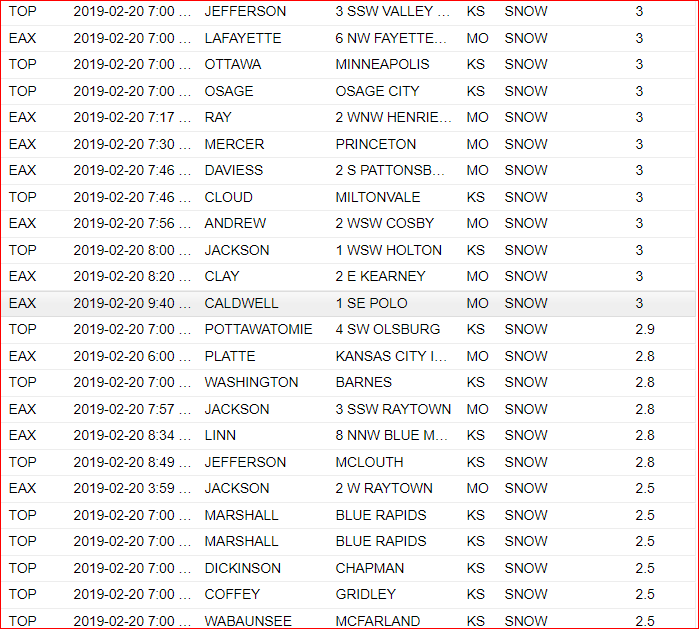 Onwards to the weekend.

Here is how the NAM model shows this developing. You can clearly see it along the west coast. This is up at around 18,000 feet or so. Notice that “U” shape…then the the “U” closes off near Las Vegas and then comes out through western TX before turning towards the NE.

Where that turn occurs may end up determining whether we get nothing but rain…some sort of switch…or a full on blizzard in the KC region.

It’s possible as well that we get all three.

That storm will be vigorous above us…and will help to create a rather strong surface low.

Let’s again look at some model data…and again go up to about 18,000 feet or so…what we refer to as the 500 millibar level.

Odds are that thing will come right on top of us.

When that happens the surface low tracks close by and east or southeast of the upper level storm. IF that works out…that’s a favorable snow track for the KC region BUT…

There will be an influx of warm air ahead of this…that will be with us for awhile on Saturday. So that’s why we start as rain with this…ot at least liquid.

Then as the surface low pulls away…colder air at the surface starts to come into the region…that is the issue needed to convert whatever over to snow. That timing is still in flux…likely in the PM on Saturday (if it happens).

The difference is the surface low position in the models shows up at noon on Saturday…it doesn’t look like a big difference but it is…that farther north position of the GFS is a “warmer” look for us overall. So IF you don’t want snow locally…you’re pulling for this result for the most part. 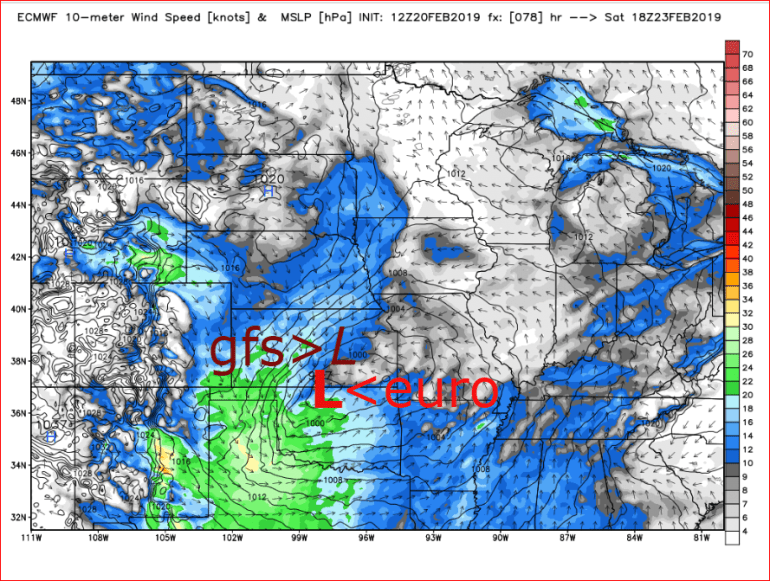 Then by 6PM Saturday… 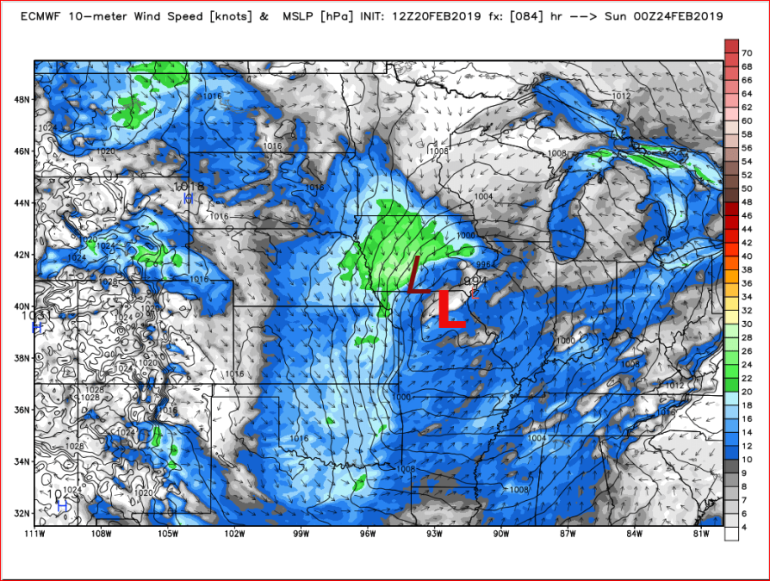 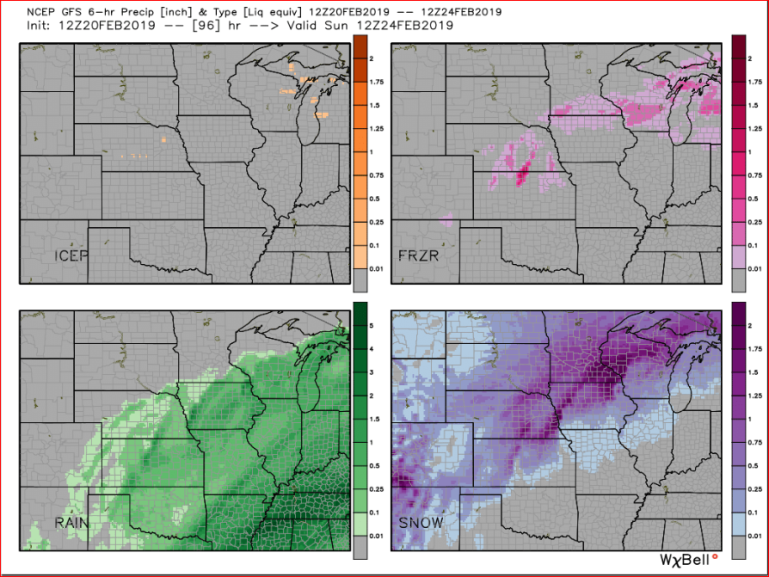 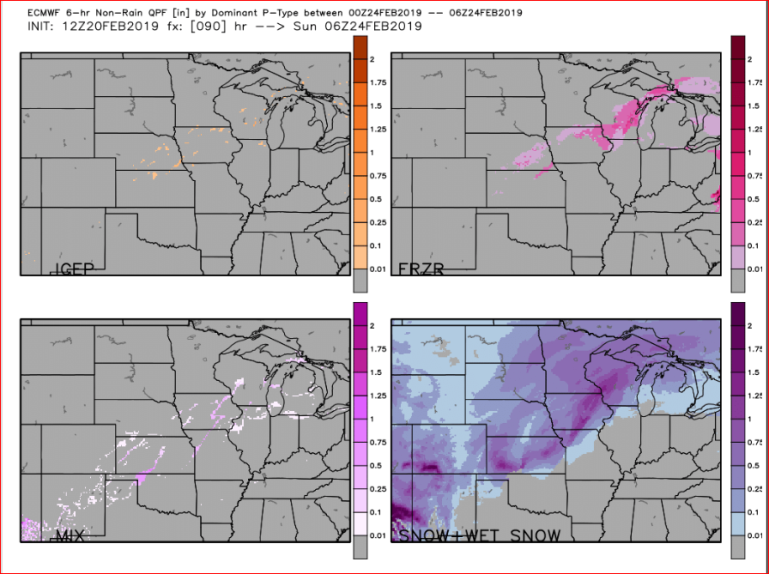 Notice the difference in accumulations of the snow? That southern track of the EURO brings the backside snow almost to the I-35 corridor. Don’t focus on the legend values at this point.

What precip is thrown around the surface low into the cold air..will determine who gets the snowstorm. Since this will be a somewhat vigorous surface low…there will be wind with it too…so hence the potential of a blizzard somewhere. At this point anywhere from I-70 to I-80 in KS/NE/MO/IA is vulnerable.

It’s TOO EARLY to go all in on this one way or the other. KC could miss out with a 75 mile farther north track…and vice versa. The margin though is uncomfortable as I talked about last night. Let’s just say 100 miles either way. In the world of weather…3 1/2 days out…tracking these features…100 miles is NOTHING!.

Again just know that it’s something to watch…don’t tell the relatives that a blizzard is for sure coming…don’t get hooked into seeing social media posts with snow totals…and DON”T trust whatever weather app you look at that could well gyrate between over 10 different model runs over the next 3+ days…100 miles one way or the other in the weather world is nothing…(I’m stressing that).

At this point I have no strong feeling which model may be 50+ miles closer…fools gold right now to speculate. The GFS ensembles…another 20 or so model runs…all are with the operational GFS model…giving us and even northern MO very little snow, if any.

Some clarity should come tomorrow afternoon. My feeling is the GFS model will trend a farther south in time…at least with the snow potential. Whether that means anything for KC…we’ll see.

Our feature photo comes from ‎Andrea Lemon‎ in Linwood, KS. Her dog DID NOT want to come inside! 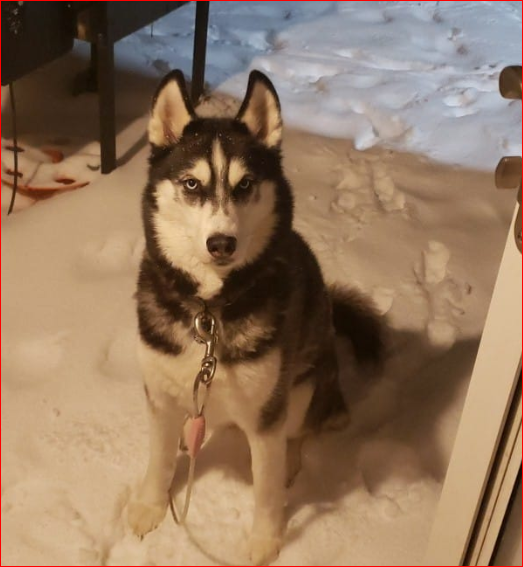