Good afternoon…I know the 1st full day of autumn still feels a lot like the last day of summer but things are going to change over the next 5 days…and while the changes mean an end to summer for the year…I’ve got some beautiful weather on tap for next week…cool mornings and great (perfect) afternoons on tap. We’ll need the rain we see over the weekend because it looks dry for awhile afterwards.

Tonight: Clears skies and pleasant with lows in the mid 60s

Saturday: Increasing clouds with isolated showers possible during the day…with the rain chances increasing more so heading towards tomorrow evening and overnight into Sunday. Another warm and humid day with highs 85-90°

Sunday: A cold front moves through in the morning hours…this will level off the temperatures. Rain is also likely in the AM and may linger into the early afternoon before winding down during the afternoon. Highs may be around 70°. We could cool into the 60s during the rain and then rebound later in the day with some sunshine. Hopefully this works for the game but I’m concerned about leftover areas of rain for the tailgaters.

Monday>Wednesday: Near perfect weather. Cool mornings…45-50° and mild afternoons. Near 70° Monday then 70-75° afterwards. In other words…💯

Well our run of summer weather will come to a close after Sunday. It’s possible>likely that we’ve had our hottest days for the rest of the year. We topped off at 91° a few days ago and it won’t be that hot tomorrow. Earlier this week week before the heat settled in we were 1.5° above average for September…now we’re almost 4° above average for the month. A more seasonable week is on tap for next week. This will be another month with temperatures above average in KC.

The cold front that will be changing our weather really hasn’t come together yet…but it will later tomorrow into Sunday morning as it moves through the region. This front will sweep the warm>hot air away and replace it with more typical fall weather. The transition kicks in in ernest Sunday morning.

The questions for the weekend are 1) what is the rain situation on Saturday and Sunday? 2) How much do we get locally? 3) Do things move along fast enough on Sunday that we dry out for the game and see sunshine break through?

Item #1 & 2 are coming into focus. Rain is likely as we head towards tomorrow evening and night. The rain will come from thunderstorms and with the atmosphere being rather soupy aloft…the potential of locally heavy rains will increase into Sunday morning. Model output shows this potential nicely BUT there may be some areas that don’t fare as well as others. My initial thoughts are that areas W and NW of KC stand the best chance of seeing 1-3″ of rain. For KC my thoughts are closer to 1″ as an average and for areas farther SE of the metro…maybe 1-2″ assuming there can be some robust development of storms Sunday afternoon towards the SE of KC.

Item #3 though is a bit trickier. The NAM model has been the fastest in moving stuff through…the GFS and the EURO are lagging the rains into the afternoon for the KC area while fading the rains at the same time. This may leave the window open to at least some light rain lingering through mid afternoon close to kickoff. This then translates into how cool it will be Sunday afternoon. The longer the rain lingers the closer to 65° we’ll be…the quicker it ends on Sunday the better chances we’ll be close to 70°, or perhaps above that west and NW of KC where the rain should ends quicker.

So considering the storms/rain and even the front itself doesn’t even exist…there are still a few moving parts to the forecast for later Saturday into Sunday.

The upper level storm that will be creating and pushing the developing cold front eastwards is readily seen in the water vapor loop.

You can clearly see it spinning in UT. This upper level storm will split into 2 pieces. The main piece will move through the upper Midwest Sunday>Monday. Another piece will break off and drop into the SW part of the country into northern Mexico and eventually kick out through the Rockies later next week.

Piece #1 will be the piece that will help generate a cold front in the western Plains tomorrow.

This front will still be a long ways away from KC later tomorrow afternoon. Here is the 7PM forecast for SAT off the NAM model. 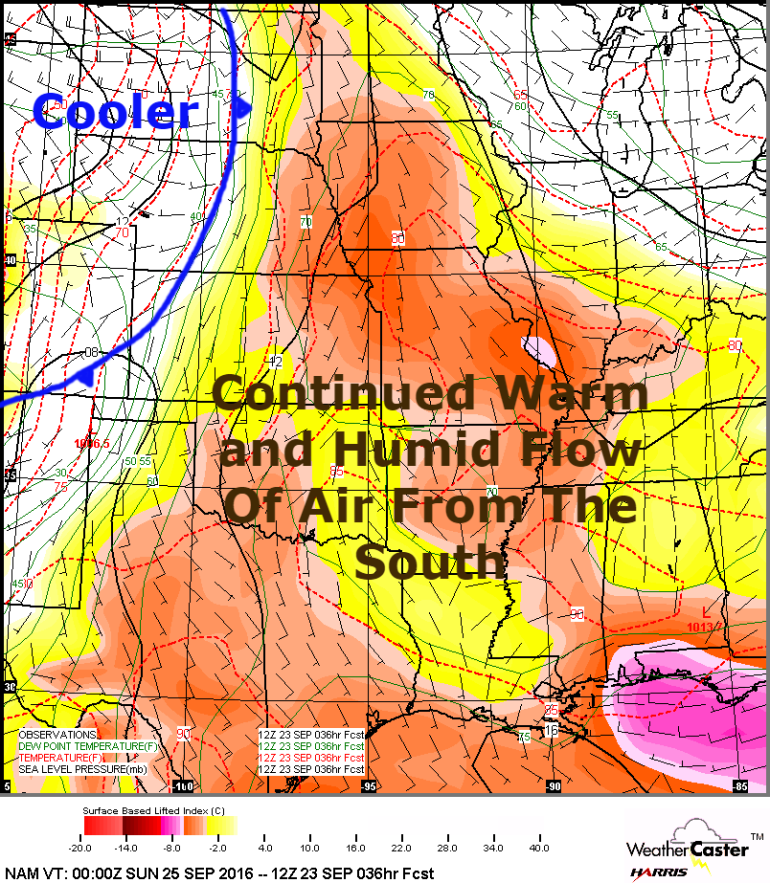 That’s a bit away from KC for sure. Ahead of the front showers/storms will develop and move towards the ENE. There will be some weak upper level waves coming out of the main upper level low later tomorrow as well..hence the scattered chances during the day (especially west of KC) with better chances locally in the evening. Then eventually the front gets into the area Sunday near daybreak…so the rains will continue for awhile.

I can’t say enough how good the weather looks from MON>THU of next week. There may be some lingering clouds around Monday morning…but if not…spectacular weather is on tap for the region.

Lows next week will drop into the 40s for many areas to near 50°. We should start a slow moderation in the late September sunshine as the week moves along. The air will be dry and that type of air mass responds VERY nicely to early Fall sunshine…and warms up nicely. So crisp mornings and mild afternoons are all but assured for several days next week!

Have a great weekend and I’ll update the blog tomorrow afternoon.

Our feature photo is from D Robb in Trenton, MO of a pretty sunrise from this morning.

Tracking the Tropics: Was 2021 hurricane season as active as predicted?

Thanksgiving forecast: What to expect Thursday in Kansas City