Good afternoon…a lot of filtered sunshine out there but temperatures are in the 60s right now but with the breeze blowing it feels a little cooler. As I’ve talked about for quite some time…if you can try and get those outdoor chores done before tomorrow evening, because while we should warm up again before the end of the month, the middle third of the month is not going to be pleasant.

Tonight: Fair skies and SW winds will allow temperatures to remain “mild” with lows in the middle 40s

Tomorrow: Increasing high clouds again but milder with highs in the 65-70° range South winds will increase to 10-25 MPH during the day.

Tomorrow Night: The arctic front should move/through into the region between 7PM-12AM. We’ll have some additional; clouds and there may be a few light showers associated with the front and rapidly falling temperatures behind the front. We’ll be mild (50s) tomorrow evening before the front moves through.

Tuesday: Blustery and colder. Any morning clouds (maybe a near daybreak flurry) will break and we should see partly sunny skies in the PM hours…highs will be in the 33-38° range in the afternoon. Wind chills will be in the teens and 20s.

So I guess we need to talk about the cold weather…

So how long has it been since the high temperature was below…in #KC #KCwx #KansasCity pic.twitter.com/6hNnDhgklj

So it’s been awhile…

My suspicion is that once we get stuck in the 30s for highs…we may be stuck there for awhile. I just did some research utilizing the FOX 4 Weather Almanac and wanted to see the coldest high temperatures from 11/12-22 which I suspect will be very cold around here…I wanted to see what year(s) compared.

In 1972 on 11/12 we had a high of 47° then on the 13th it was 44° then we had 9 straight days with highs in the 30s which I think is a record for straight days in the 30s in KC in NOV. We also had some snow mixed in through that period with 7 of those days seeing at least a Trace or more of snow and 3 days with at least 1″ or more. If memory serves that’s the year/month that KCI took over as the official station in KC.

Other random facts for you concerning cold high temperatures in November…

It will still be cold though…and it’s going to last a lonnggggg time it appears…at least till the 22nd or so.

Via NEXLAB you can see the arctic air up there…in the the Dakotas and especially in Canada.

The temperatures in the above map are in RED…lots of 10-15° temperatures in Canada….that airmass will ooze south tonight then start picking up its push tomorrow afternoon.

As this process occurs snow is going to break out across the N Plains and the upper Midwest. Here is a map reflecting the higher probability of at least 4″ of snow by TUE @ 6AM 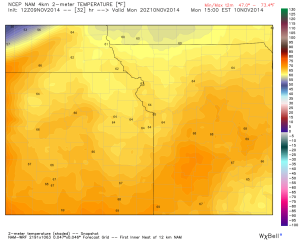 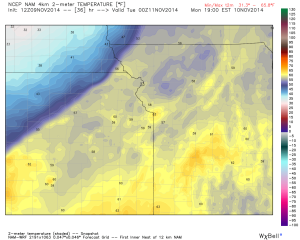 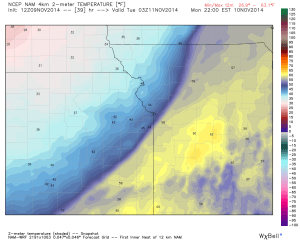 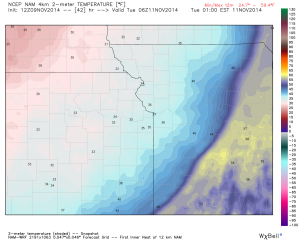 Continued cooler than average days are expected through the next week or so. the exception might be on Monday of next week. Friday rain chances will be increasing