Good afternoon…if you’re not going to read my weather blog today I’ll help you out. The former refers to us and the latter is referring to what is increasingly likely to occur towards the NE part of the country. I’ll be covering both this afternoon. Odds are you’ll like what you read.

Tonight: Clearing skies and chillier with lows in the 20-25° range.

Tomorrow: Mostly sunny and milder again with highs pushing well through the 50s

Tuesday: Fair skies with highs again in the 50s

The day I’m most interested around these parts is Wednesday but you’ll have to wait a bit before I get to that. Outside as of this writing cooler air is funneling down through the region on strong NW winds of 20-30 MPH. There have be some off/on showers as well since last night with some spots getting around 1/10-2/10″ of moisture. We’ll take it although I’m not really sure if it’s going to help out the deficits that are creeping up slowly but surely. we’re certainly colder than were 24 hours ago…as the warmth from yesterday has been pushed towards the southern part of the country

What’s always amazing to me is how a relatively small and compact system, like the one affecting us today can turn into the monster storm that it is destined to become. Take a look at the storm on the water vapor loop…which is sort of like our atmospheric x-ray which enhances the moisture in the atmosphere.

The storm’s core is moving through eastern MO and will eventually head towards the eastern part of the country tomorrow when it will really crank up and undergo “bombogenesis” (definition to come) a term that you’ll be hearing more about.

You can see the storm developing on the computer models tomorrow into Tuesday. Notice the deep and carved out “U” in the contours in the animation below…that’s what we refer to as a “trough” which eventually deepens enough so that the contours close off into a circle…that’s an upper level low.

The animation above shows the winds/flow aloft at about 18,000′ in the atmosphere or the 500 mb level. What the models are forecasting the storm to eventually do is mesmerizing for those of us who follow the weather carefully. At the surface where we all live though…here is what the NAM model is portraying.

In the above animation the thicker RED line represents the “approximate” rain/snow line. It’s the “perfect” storm for them as the surface storm intensifies rapidly off shore…pressures tank quickly to near 970 mbs…in about a 24 hour period from tomorrow afternoon through Tuesday afternoon…meeting the “bomb” definition. 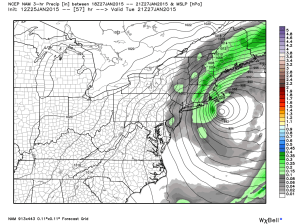 There are still various outputs suggesting the bulls-eye, if you will, of the heaviest snow 1-3 FEET…will fall anywhere from N NJ into New England. One of the things that will be watched is the increasing chances of thundersnows that will aid in ramping up the totals. Although with all the wind that will occur with the storm, it will be impossible too measure in the long run.

Another piece of relevant information is that water temperatures off the northeast coast. They’re warmer than average…and significantly so.

This warm water will help to contribute extra moisture into the storm, allowing even lower pressure to develop and that will potentially create heavier precipitation. The storm may even have an “eye” on WED as the moisture revolves around the system.

Blizzard Watches will be upgraded to warnings in the next 24 hours or so. At this point they stretch from NJ into New England.

The latest snow forecast for the Boston area…

For the NYC region… and the NJ/E PA area… Overall a massive storm…and potentially one that will establish all sorts of daily snow records for the NE part of the country.

Oh and another storm is possible later in the week…They are in the sweet spot after having little snow to worry about so far this winter season. The other issue will be the life-threatening cold weather that will develop there as well over the next 10 days especially to start the new month. With all that snow on the ground the potential of record-breaking cold and also some terrible wind chills will develop.

IF you’re planning on traveling back east…leave Monday or don’t expect to get there till THU and then you may be there awhile. This is going to be a big nationwide story this week in terms of the ripple effects of the storm TUE>WED then again potentially FRI>SAT. The travel situation will become a nightmare back east and that will have ripple effects through the flight system…including KC. Airline passengers may be stuck there for over 1 week as the back load of customers will be tremendous should the next storm hit later in the week.

OK now what about us in KC? Well we continue to live large. The cold air that was brought in today leaves us tomorrow and the warmth returns for most of the upcoming week. Tuesday will again be in the 50s and Wednesday is the day I’m targeting not only to break the current record of 65° but to potentially reach 70° and IF things worked out perfectly we could make a run towards the all-time JAN record of 75°. Why am I forecasting this potential?

I want to show you the forecast sounding for WED PM at 3PM. When forecasting the weather it’s often useful to try and figure out the winds in the lower part of the atmosphere to help determine how “mixed” the atmosphere is. The more wind the deeper the mixing. The models have consistently underestimated this factor in the previous big warm-ups we’ve had and by utilizing this method you can get a more accurate forecast. 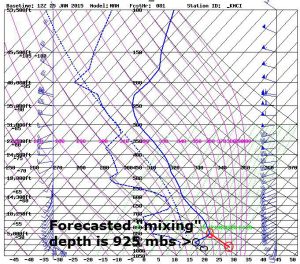 The models underestimate this potential. For example on WED at 3PM the NAM model suggests the atmosphere will be “mixed” through 925 mbs or so. That’s about 2-3000′ up (give or take). By doing this the model suggests the high will be around 65°. Since though the model has under-forecasted this parameter time after time in the last couple of weeks…I think the “mixing” height will be higher. Perhaps 900 mbs…which would allow highs to jump to 70° which is what I may up the forecast to tonight. With enough wind in play and should we fully mix out, which I can’t rule out, highs can surge to 75°+. If you just look at the model output you forecast highs between 60-63°. IF you’re watched my forecasts you know I’ve been more aggressive than that since THU and I’m guessing I will be more aggressive in my forecast for WED tonight as well. The daily record is 65° (1/27/1917) and the monthly record is 75° set back in 1950 on 1/24.

What can happen to foil this forecast? Clouds and less wind. That reduces the “mixing” potential and to get that warm in JAN you really need everything to work out perfectly. There will be a subtle feature moving our way on WED aloft too potentially create some thin clouds filtering out the sunshine. Odds are with this feature showing up in the data…my forecast tonight will be somewhere in the upper 60s to lower 70s.

That’s it for today…have a great Sunday and let’s watch the storm in the east from afar. That really is a lot of snow!

Murder charge in I-170 shooting; police call it a road-rage incident