Good afternoon…still feeling that summer switch out there…we’ve been above average every single day in May and today will be no exception to that. It feels like summer out there and it looks like summer. Storms are around KC…and most prevalent towards the Ozarks where some heavy downpours are happening this afternoon. Yesterday parts of the area got dumped on…KC had a whooping 1.73″ or so…while many got little to nothing. There were some hailers mixed in as well. There was also something that happened that was rather rare to see…only IF you were observant and were in the exact right spot could you see it…and I was and did.

Tonight: Variable clouds and more pleasant with lows closer to 60°

Friday: Somewhat warmer with highs into the 80s

Saturday: There may be some storms in the region…some before lunch stuff and then later evening stuff. IF there is a severe weather risk it will be more towards Saturday night. Main threats…hail/wind it appears. Highs in the 80s

Sunday: Should be drier and not as muggy with highs closer to 80°

I don’t want to get too into the weeds about today’s storms down south of KC towards the Lakes region…interesting feature though down there just sort of spinning around and created slow moving heavy downpours.

Meanwhile I want to talk about last night…take a look a this video I shot from my backyard…look towards the left of the tree and into the brightest spot in the clouds…LOOK VERY carefully about halfway through the video. Do you see the “spotlight” type of strobe effect that is present?

You may need to play it twice and look really hard. It’s a rarely filmed phenomena called a “Crown Flash“.

It occurs when ice crystals way up in a cumulonimbus cloud are re-oriented with an electrical discharge. Then almost instantanously they flip back to their prior position. There have been instances like it before and certainly more vivid ones that what I captured but unless you were looking right at it at the exact right moment…you missed it. It was a bit more clear before I could get my video started but still I was excited to see this. Here is a bigger example of what I witnessed. (note NSFW language apparently)

Anyway I was giddy as a school girl.

I was at a conference a couple of years ago when I saw this phenomena on video for the 1st time. It’s rather rare and most will never see this in their lives…but there it was.

My colleagues from the NWS in Topeka helped me out a bit as well and dug this article up with more of an explainer.

Did some searching online and came up with this article: https://t.co/45C2cmES86

So that was fascinating…and so was what what happened a couple of days ago in the NE part of the country. The nationall media made a big deal out of the 5 tornado reports in the southern NY area. Granted that is NOT the place you think about tornadoes…but there was also a pretty impressive wind event as well. 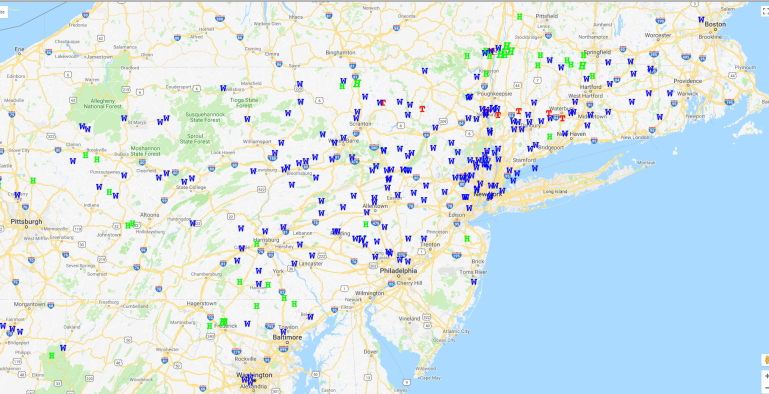 Look at all those wind reports! Lots of down trees/power lines up there.

What I wanted to write about though is something else that occurred that also is rather unusual and that would be a “meteotsunami”. Many have heard of tsunamis generated from powerful earthquakes. They can kill thousands of people along coastal areas, particularly in the Indonesia area. Alaska and Hawaii have also seen deadly tsunamis in the past..a.gain caused by the earth moving.

This “meteotsunami” was caused by the weather. What happened is that as the storms moved through some of the more expansive bays and rivers they generated an air pressure downward force on the water. This pushed down on the waters surface. When that occurs…a ripple is created…think about splashing your hand in the water in the bathtub. You create a mini wave. What made this more interesting is that as the “mini” wave pushed towards the sloping sea shore the wave increased in size. There were 1 foot rises along some of the coastal areas that were affected.

This is sort of a decent explanation graphic…a bit complex too.

So in the graphic above the meteo-tsunami would occur from the right to the left. The sloping effects of the shore region are important in the build up of the tsunami as it comes ashore. This is a one direction thing…it doesn’t flow back into the Ocean I don’t believe

A seiche on the other hand, more typical in large bodies of water, for example the Great Lakes…has more of a sloshing back and forth effect and in addition to pressure forces may also be generated by persistent strong winds that “blow” the water away.

The 2 though are closely related.

More on the weekend situation tomorrow…

Our feature photo comes from @SphaleriteMz of the towering clouds from yesterday. 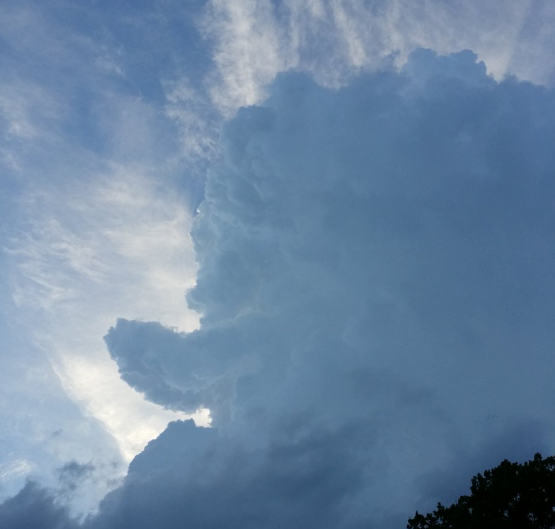