It’s Friday…it’s been a long and fun week and I’m sure you’re ready for a break and a bit of a reset after all the craziness of the past week or so…the weekend will be OK with rain chances during the 1st part of the day on Sunday. Tomorrow will be a good day though with temperatures in the 40s.

Overall next week willbe sort of an up and down week…we’re kind of going into an active pattern and we need to watch later next week for some winter weather and the 7 days through the 21st or so for additional snow chances. Not sure if it’s all snow or not…but the storms will be there…where they track remains to be seen

Today: Mostly cloudy and chilly with highs in the upper 30s

Tonight: Clearing skies and cold with lows in the lower 20s

Saturday: Nice with highs in the 40s

I’m not really going to write about the upcoming weather…we’ll deal with that on the weathercasts today.

Yesterday though was an interesting day…some 7300 miles away…way down towards the northern tip of Antarctica. 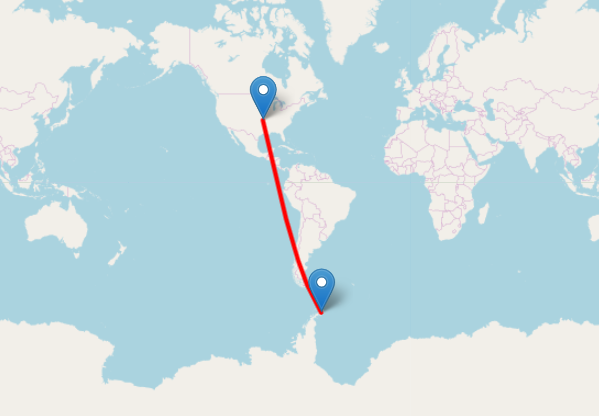 There is a research station down there run by Argentina that has been there since the early 60s. It’s called base Esperanza.

It’s a series of modular buildings that is one of only two civilian bases on the entire Antarctic continent.

There are some 43 buildings…and some 50-60 folks live there I guess. Penguins easily outnumber people judging by the pictures I’ve looked at.

Here is a better map… 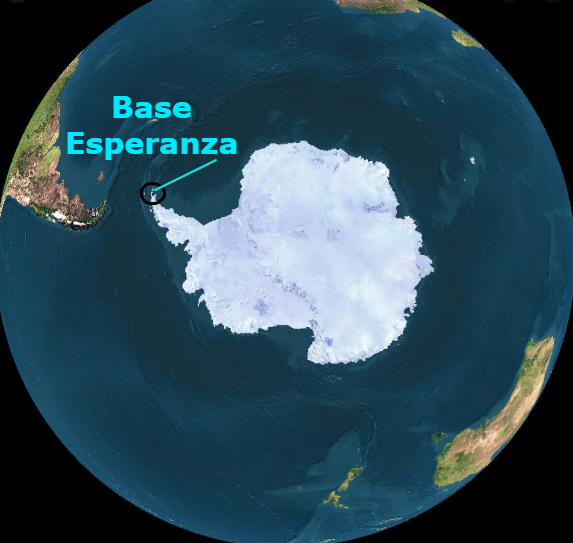 Antarctica is a huge place…roughly the size of the United States AND Mexico combined…and is mainly composed of rock and ice. The ice is roughly 1 mile thick but can be 3 times thicker in spots.

So why am I telling you about Antarctica? Well 1) it’s actually sort of interesting…you can actually take cruises down there…their expensive and not you’re typical cruise to Mexico…but you can do it.

It might be a good time too…because yesterday for the 1st time in the continents history…they did something that may not have happened before…the hit 65°.

That’s right they set a record high for the continent at Base Esperanza.

Now there are some important caveats…1) the weather data goes back to about 1961 or so. Not exactly a huge trove of data in the scheme of weather or climate for that matter. The previous all time high for the continent was 63.5° set back in 2015 in mid March I think.

There also aren’t a lot of weather stations across the continent. There are thousands in the United States and perhaps a couple of hundred spread out over Antarctica…

They’re operated by different nations and I’m not sure how well they operate.

Here in KC our weather data goes back to the 1880s. So it’s an important consideration…something called POR or Period Of Record.

All to often when talking about record highs…I see folks using data from stations that only have about 30 years of  POR…that isn’t that helpful in my opinion in trying to figure out if something really unusual is happening…cold or warm.

50 or so years of data is better…not great but better.

Anyway as we research more and more down there we are getting better data…and better satellite data as well to help us figure out the whims of the ice and also whether or not the ice is expanding or contracting. 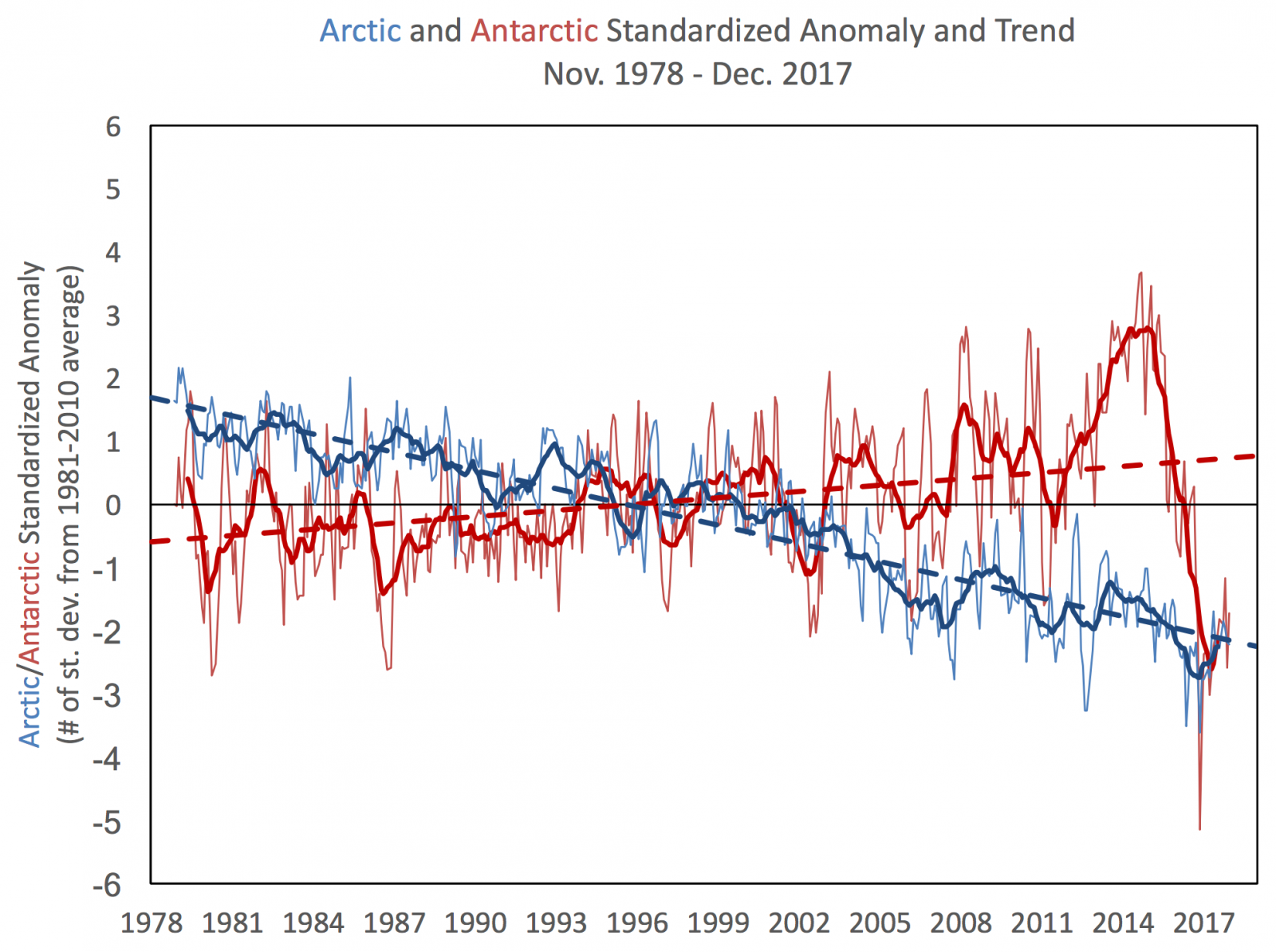 Take a look at this animation showing the extent of the sea ice down there…the magenta line represents a 30 year average from 1981 to 2010.

There have been disturbing fluctuations in the last few years however…whether it’s a longer term trend or now remains to be seen. 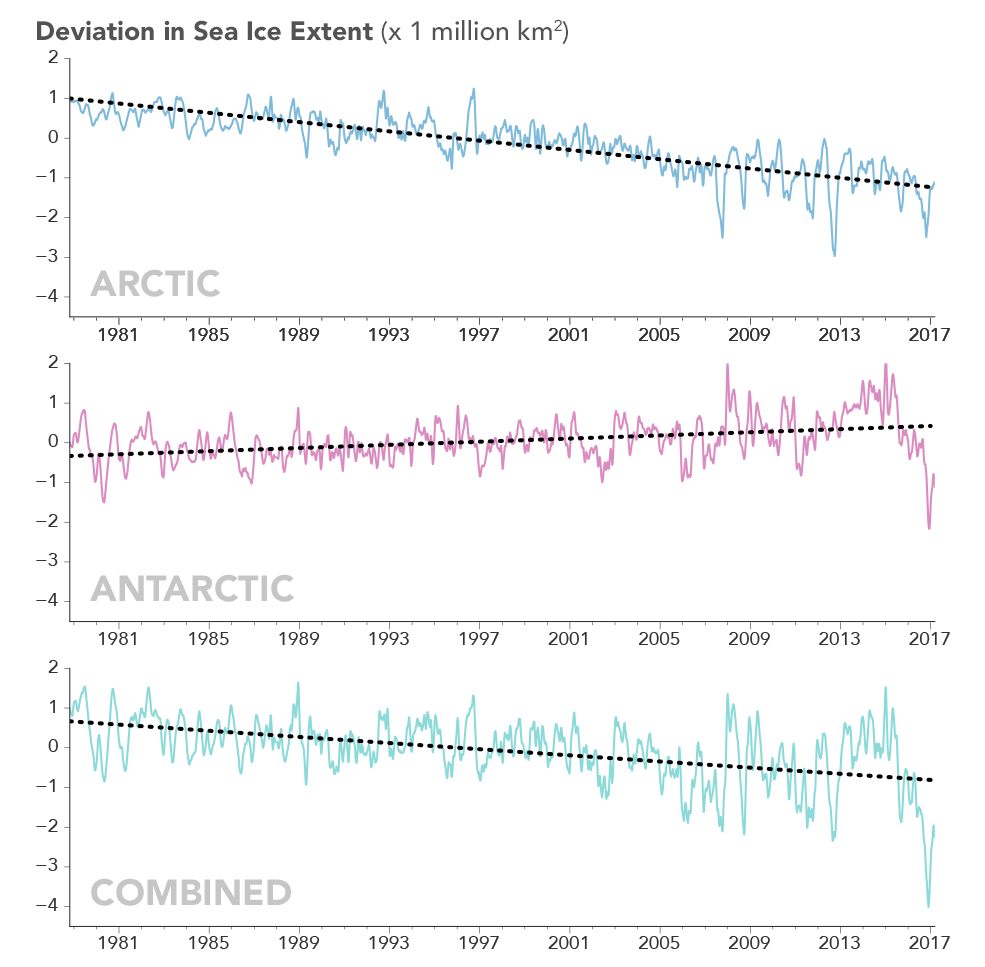 The graph above is via NASA 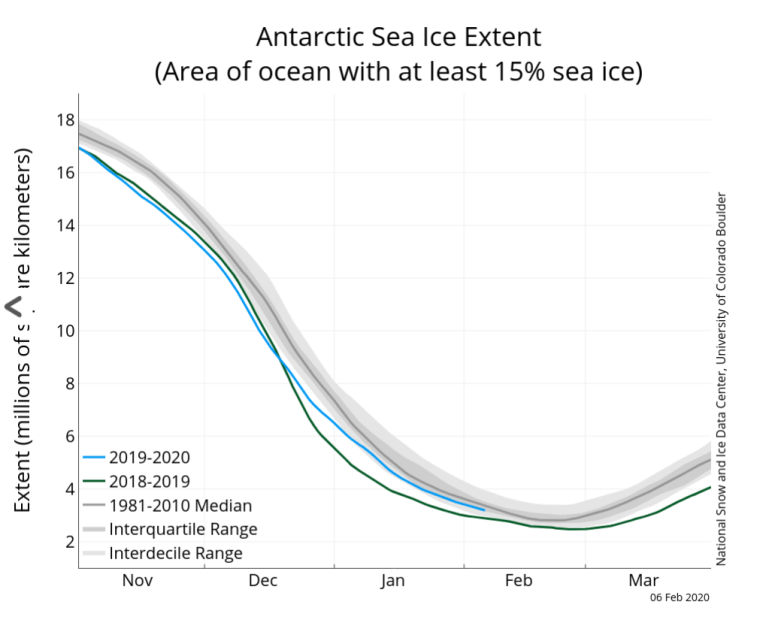 It’s not as bad as last year (last year was really not good compared to the 30 year average).

Anyway…establishing a continental record high temperature is a big deal for any continent I think even though the POR isn’t that great.

65° is a pretty impressive temperature there. It is there summer there as well…and they’re bathed in daylight all the time right now I believe. Here is some additional temperature extreme data from that area via wikipedia.

18.3°C! – new highest temperature recorded for continental #Antarctica, yesterday at Esperanza Base, the northern tip of the Antarctic Peninsula, 63°23′S; previous record was 17.5°C in 2015 also at Esperanza @SMN_Argentina; records began at the station in 1961, pic Nestor Franco pic.twitter.com/1qhbv0rDQj

This data will now be independently verified by the World Meteorological Organization. The thermometer will be inspected to make sure the calibration is correct and the data is true and reliable.

There are also different considerations for the continent of Antarctica and the region of Antarctica. The region encompasses and area of ALL land and ice south of 60° south latitude. The record for the “region” is actually 67.6° set on 1/30/1982 at Signy Research Station, Borge Bay on Signy Island which is actually an outcropping of islands north of Base Esperanza.

Here is more data about that…

So there you go…your daily update for a continent some 7500 miles away!

Our feature photo comes from Jess…taken last weekend before the big game! 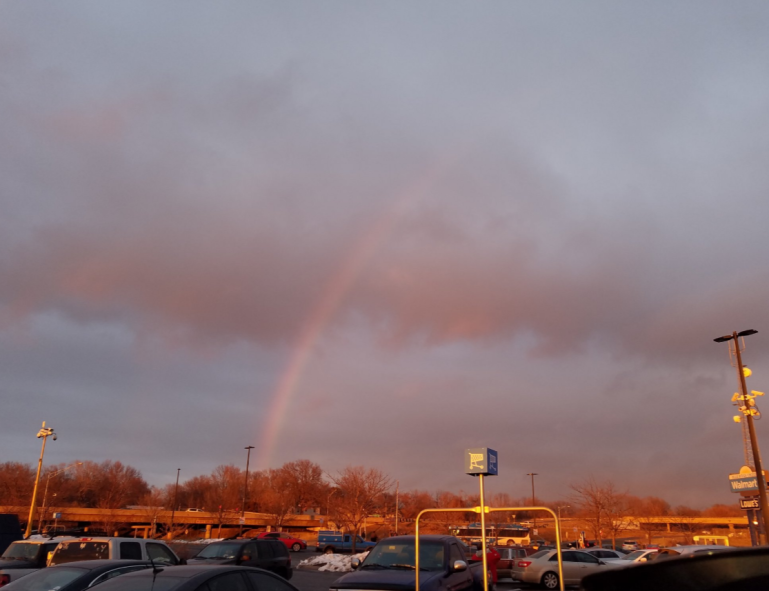