Good afternoon…another day…another day with flooding for part of the area. Rain patterns have been interesting over the last few days…with areas from I-435-470 and northwards in the more favored location for rainfall…while south of there the rains haven’t been as heavy (in terms of amounts). Today again the heavier stuff was north of I-70…and closer to the 36 highway corridor.

Tonight: Additional storms with locally heavy rain are likely to move into the region overnight. Most of the evening though may be OK for the majority of the area. New storms though will be developing across N KS and S NE and trying to make a run towards the region..again especially from KC northwards. Lows in the 60s

Friday: Lather-Rinse-Repeat. Highs in the 70s.

During the 5PM newscast tonight I’m going to do a brief report about comparing what’s happening this year compared to 1993. It will basically be a rehash of a blog I did last week…pointing out the fact that it really doesn’t compare at this point to what happened back then. With that said though on a more localized basis, for example the Fishing River near Mosby, MO (where evacuations were ordered again this afternoon) it really doesn’t matter.

Using the historical data from the NWS-Pleasant Hill website…the forecasted crest (at this point) for the Fishing River near Mosby is almost 28 feet. The record is 33.8 feet back in July of 1995. With that said the river is going to be in the top 5 of highest levels since records have been kept which is impressive.

With that said…the web page does not show data for 1993 for that river and a few others in terms of historical crests. I checked with the NWS hydrologist and the thought is that since some of these rivers are monitored manually that perhaps the river got too flooded to measure in a sense. The Fishing River in particular is more subject to flash flooding than anything…and that’s why to this point the comparison on a more regional basis to 1993 is a tough one. We’re dealing with more of a flash flooding situation than anything super widespread. The torrential rains fall, creeks/rivers flood locally, then subside somewhat quickly before the next wave of rain comes in.

For comparison…here is a look at the accumulated precip comparison from 1993 and 2015. Data is for KCI. You can add another apprx. 1/2″ to the June total to take into account what we’ve received so far today.

Now the amounts of 1993 take into account the entire month of June…and for 2015 the amount + 1/2″ from today is only through the 1st 4 days…so we stand roughly at 19.3″. it’s not out of the question with a few more big events over the next 3+ weeks that we could be very close to the rainfall amounts of 1993 by the end of the month. With that said though…July of 1993 featured almost 11″ of rain locally and more importantly a bucket of rain upstream along the MO River. That water drained into the mighty Mo and flowed through the KC area creating the flooding scenarios that played out in the region.

Take a look at the river gauges through the area…again note that only a few are under “moderate” flooding. 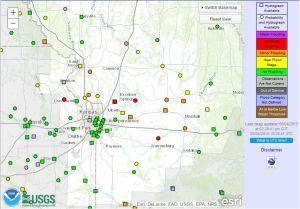 Now to repeat 1993 we need to have a LOT(!) of water in the terrain “upstream” of KC…take a look at the river gauges in the Omaha region…which includes SE NE and W IA…note all the green dots! 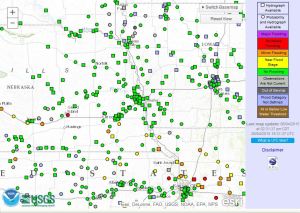 That means the the various rivers and creeks are well within their banks…that’s a good thing! There’s less water to drain into the bigger creeks/rivers that eventually drain into the MO River.

1993 was so bad partly because once the MO River went way over it’s banks…other rivers couldn’t drain into it any longer…that backed them up and resulted int eh devastating flooding that took place.

For those who are directly affected by the flash flooding though it doesn’t matter. A flood is a flood is a flood. Unfortunately with the amount of moisture sill available through the atmosphere from the ground up…this process of storms firing in the Plains and rolling towards the east and ESE will continue for the next few days.

This is a computer generated graphic showing potential rainfall…it doesn’t take into account however the locally heavy rains that may fall that can’t be forecasted for a specific city until the rain actually forms in a sense…but you get an idea what the potential is (really in some isolated areas doubling these values wouldn’t be shocking). 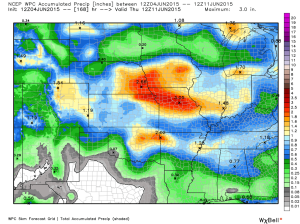 As far the the weather goes…while we’ve stabilized for the time being the instability is once again building like crazy in central and north-central KS this afternoon and it’s a matter of time before something explodes out there. Here is the HRRR model via IA State…showing the potential evolution of the storms out west and their potential arrival late tonight into early tomorrow morning.

We’ll see how things come together this evening and try and track where the worst of the rains will eventually go. Regardless the air aloft, as I mentioned before is still just about as soupy as can be…so the rainfall efficiency of whatever falls will be excellent and that is not good news for waterlogged areas.. Our forecast will remain about the same as the past few days, but the big difference will be the lack of sunshine today and tomorrow. That's all thanks to now Tropical Depression Beta, as it slowly pushes away from Texas and moves northeast. Some sprinkles/light showers may fall over the MO side late today, tonight, and tomorrow, but that'll be all we see out of it. By Thursday, more sun will come out, and so will the 80s. The weekend may look dry as well as the next front will struggle to find any available moisture to use. We're watching those chances, right here!