Good morning…very soggy out there today as off and on rains will continue this morning…and while another batch of storms is possible later this afternoon and early this evening…we;ll have more rain come at us for awhile on Thursday as well…so it will stay soggy out there as we’re erasing the moderate drought conditions that have been in the area for the last several weeks.

KCI airport has picked up almost 1″ of rain overnight…and we’ll add more to that through tomorrow. It appears that area totals were pretty nicely in the 3/4″-1″ range…in line with expectations…now lets see how much more we can tack on to that.

Today: Cloudy with showers this morning…then breaks in the rain followed by thunderstorm chances between 4-8PM or so. Highs today may actually get a bit warmer than what I thought yesterday (maybe). Highs 60+°. Some towards the SE of KC may even be warmer than that. The thunderstorms will need to be monitored for the risk of some hail should we get a bit more unstable.

Tonight: The rain may be more off than on…temperatures will be mild in the evening (around 60° and then drop back to the 40s be daybreak

Thursday: Off and on rain continues…cooler with highs near 50° (steady temperatures).

Before we get into our weather…a quick note…several storm chasers were killed yesterday in what appears to be a near head-on crash involving 2 storm chaser vehicles down in TX outside the Lubbock-Amarillo area. From the description provided by the Texas DPS…it sounds like one vehicle rain a stop sign and collided with the other vehicle. I’m not sure about the weather at the actual crash location. Many chasers believe that the most dangerous part of chasing storms is the actual process of getting from point A to J…with the various points in between as well. More on this as it becomes available. 2 of the chasers were sub-contracted through the Weather Channel and I believe actually had a show on the Weather Channel about storm chasing.

Let’s start with radar…because it will be the main indicator of our situation today.

and let’s broaden things out a bit…

We’ll be tracking the progress of a surface storm system today and how close and how far north it comes up the state line in relation to the KC area. Why? Because areas farther east of the surface low and southeast of the low…may run the risk of some stronger later PM storms…potentially even severe storms. IF that surface low was going to track from Emporia, KS into SE Nebraska…I’d be a bit more concerned in the KC metro…but at this point it appears as though the low may take a more Emporia, KS to KC track. That would shift the severe weather risk east of the state line. The map below shows the surface low…denoted by the closed “isobars” (black lines) that show the lines of equal pressure. IF you’re reading the blog this morning…the surface low is towards SE KS.

So let’s see whether or not we can build some instability from KC eastwards later this afternoon. wE should get a good idea by tracking the temperatures. The more into the 60s we get…the higher the risk of some stronger storms. Should we stay cool for the afternoon…this risk may be diminished.

The Storm Prediction Center is watching MO/AR especially today down towards the US 54 corridor region and southwards towards I-44. The “slight” risk is up towards I-70 and my main concern this morning is the potential of some stronger storms towards Sedalia>Columbia on the north side. Those are storms that may need to be monitored for rotation this evening. According to the SPC…the highest risk of tornadoes would be towards AR later today or tonight. In my opinion though there is a small risk towards Sedalia and northeastwards as well IF there is enough shear to help the storms out later today/this evening. It’s NOT a high chance…something to pay attention to though IF you live out there.

Tomorrow the risk of severe storms shifts towards the TN Valley region.

Another somewhat wet system is due on Sunday (not an all day rain though) and again sometime later TUE or WED AM of next week…then that should bring to an end the wetter pattern that would have lasted almost 10+ days in the KC area.

Our feature picture comes from Andy Wisdom of a pretty sunset shot down towards Clinton, MO from last month 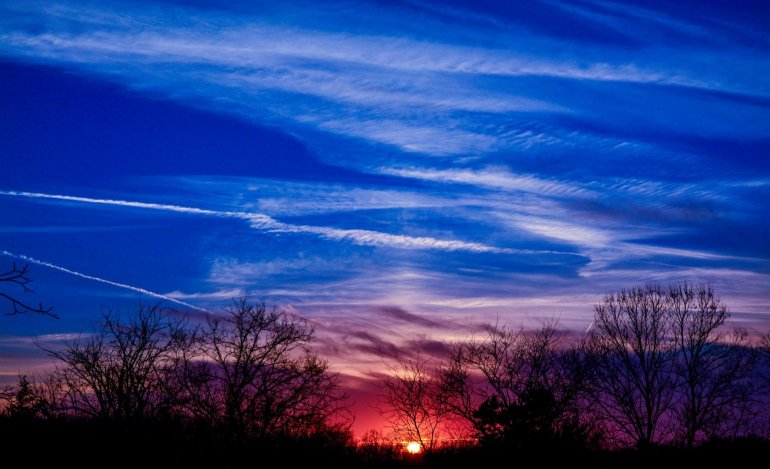