Bright sunshine but deceptive sunshine is filling the skies across the region today. The good news is that starting tonight the core of the cold weather is moving away and from here we start to moderate…and it will last for at least a week!

Tonight: Not as cold as earlier this morning (6°). Temperatures will drop initially this evening, perhaps into the teens, then level off and perhaps even go up a few degrees by daybreak.

Tomorrow: Finally some moderation. Temperatures will pop into the 50s during the afternoon with SW winds of 10-25 MPH.

This weekend: Warmth continues as highs will be well into the 50s (maybe some 60° readings). Sunshine is expected for most of the weekend. Perhaps some high clouds on Sunday. Even for march, not too bad in the wind department either.

I think the visible satellite picture is pretty interesting this afternoon. I sent out this tween earlier this morning…as a way to explain for those who dive into the models that the modelling was going to be too cold, because it thinks there is snow all over the place.

Models may tend to underplay temps…why?…they think we have widespread snow on ground in #KC area…we don't. JL pic.twitter.com/aM5UiDlXH7

The change in TX has been stark in the last 6 hours as of this writing.

By the way…quite the snow storm though the OH and TN Valley region and up towards the NE part of the country. Parts of KY had almost 2 feet of snow!

Meanwhile here in KC…the biggest 1 day snow this year has been 2.6″. Get this…the following cities have had more one day snows this year…Amarillo, TX, Lubbock, TX, Oklahoma City, OK, Tulsa, OK, Little Rock , AR, and Huntsville, AL. Dallas came sooo close…they had 2.5″ yesterday. There are more obviously in places you’d not expect…but it’s been one of the seasons for snow lovers in the KC area.

Overall Dallas had 3.5″ from the storm…there were some 6″+ totals in N TX…

The snow has moved into the NE part of the country

So with all that going on…our weather here is about to get very dull for awhile. The cold shots of air will not be plaguing us for the next 7+ days…temperatures will be moderating and while there will be occasional wind direction changes that could make some impacts in the temperatures every couple of days…no more brutal cold shots are expected through next THU…after that we’ll see as a path to colder weather may come again after that. 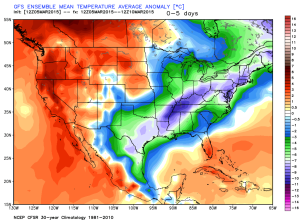 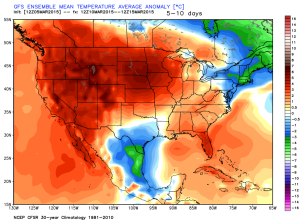 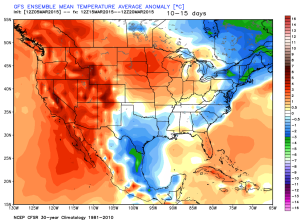 You can clearly see how temperatures in the northern and western plains will be running warm…We’re into it as well obviously…and really it’s a matter of how warm can we get next week as a day or two running towards and above 70° is certainly looking promising from this far out…obviously high clouds and other factors can play a role in that situation…but it does look MUCH better!

The GFS was very bullish in bringing another strong and cold airmass into the area later next week…the EURO never did that…and today the GFS went with the EURO solution…so again increasing confidence in a spring week next week. There are suggestions that we could cool down, perhaps next weekend.

Oh and there may not be a drop of rain for the next 7+ days!

Sunday looks mostly dry once again, and Saturday's weather will carry over to today: cloudy and cool with highs near 40. By the evening, some drizzle/light rain may finally make it to the ground, but as the temps drop below 32 overnight, a changeover to a wintry mix and, eventually, snow will happen just before the AM commute. Roads will turn from wet to slushy and icy to possibly snow-covered as some moderate to heavy burst could overpower the "warmth" of the pavement. Precip will fade Monday evening into Monday night, but a dusting to 2" is still possible everywhere, with pockets of 3" possible just south of KC and to the northwest. Stay tuned for updates as we track this first winter blast!

Well...as next week draws closer, the chances for snowflakes to fall in KC are increasing. Since this is the first solid chance so far this season, it's important to stay with FOX 4 for changes and more details moving forward. First, let's focus on the weekend.

Saturday looks cool and cloudy (picture Friday's weather) with highs struggling to get to the mid 40s. We're still dry throughout today, but Sunday is when we start to see precip. move into the area in the form of rain, especially after lunch.