Good afternoon…temperatures are in the 60s as I type this and the weather is starting to go through a typical spring gyration as a storm off the western part of the country gradually turns into a severe weather machine over the next 6 days or so…at first there will be little severe weather…then by Wednesday the area will be under the gun and by Thursday parts of the area may be vulnerable to additional storms.

Do you know what to do when the sirens go off…or your cell phone alerts you…or you see a warning move across FOX 4? It’s a good time to refresh your memory and IF you don’t have one with your family..develop a safety plan for what do do should severe weather threaten your neighborhood.

Tonight: Moisture from the south in the form of low clouds will be moving in later this afternoon. Temperatures will be steady after the moisture moves into the region…probably in the 50-55° range. There may be a few areas of drizzle/mist as well.

Tomorrow (Opening Day): Many have been waiting for this day since game 7 last fall. The weather will gradually get it’s act together but it will take it’s sweet time. One thing for sure, despite a somewhat chilly morning with a damp breeze blowing and temperatures struggling in the 50s…it will be warmer than last years Opening Day. During the afternoon the clouds will slowly break allowing temperatures during the game to warm well into the 60s, if not near 70°+ by the end of the game. Early tailgater’s though should be somewhat prepared for some mist/drizzle patches moving through. There may be some late evening scattered thunderstorms moving through the region.

Tuesday: A surface storm and attached cold front will move through. This is one of 2 surface storms that will affect the region this week. The 2nd one (and it’s set-up) is the more concerning one. The air at the surface will warm up and temperatures could really pop well into the 70s…if not into the lower 80s. Above us will warm up as well…so despite many factors in play in terms of instability…we may be too “capped”. With that said…IF we can manage to get into the lower 80s, from KC southwards and eastwards, the cap may “erode” enough for some pretty nasty storms to pop after 3PM. Temperatures will vary from thee coolish 50s in N MO to the 80s towards the south and east of KC.

There is a lot that’s going to happen this week, from TUE through FRI that needs to be figured out…and it’s not a slam dunk that we have a localized severe weather outbreak…but as I’ve talked about for the last couple of days on the air…even though we’re having a “slow” severe weather season DOESN’T mean that 1) it can’t change on a dime 2) we won’t see severe weather in the KC area of significance and 3) violent storms are NOT possible. All these things ARE possible this week in the Plains…who gets the worst and how WED>THU in particular sets up will determine how the threats evolve and who is most “under the gun”. The maps though are showing some rather strong set-ups and looking at previous years where set-ups looked like this…there were all sorts of nasty severe weather outbreaks in the region, including close to the KC area…so it would be a good idea for all our readers/viewers to pay attention to the events this week.

With that said…let’s start with tonight. The latest satellite pictures are showing a nice area of moisture to the south of KC as I type this…

That moisture is coming northwards and while we’re in the 60s now…and will goo up another 5° or so this afternoon…areas in SE KS are only in the 40s…so it’s colder to the south and warmer to the north (doesn’t happen all that often). The 1PM surface map shows this with the temperatures in RED

That cloud cover will move in this afternoon from the south to the north…temperatures will drop as that occurs. It’s a somewhat unusual way of seeing the temperatures quickly drop off, over the course of a few hours, in the early evening hours. There are a few reports of drizzle/mist in SW MO at 1PM…so I wouldn’t be shocked if we get some mist or drizzle overnight. Any breaks in the lower clouds will fill back in towards tomorrow AM.

On Tuesday a front and attached surface low will be moving through the area…where this front sets up in the PM will be vital in determining who gets real warm…and who is rather chilly. The NAM has this idea for 1PM Tuesday. 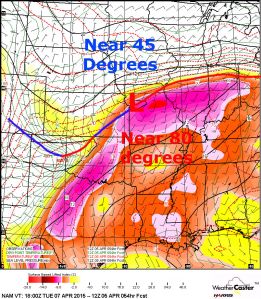 The latest EURO is slower with the frontal timing and allows the KC area to soar well into the 80s. Should that happen…we could see some fast moving severe thunderstorms form. Other modeling isn’t as hot as the EURO and as a result we would stay capped.

The “cap” is a layer of “warm” air above the surface…it’s location can be anywhere from about 5000 feet up to 12000 feet up. The cap kills air parcels that are trying to rise upwards from the lower part of the atmosphere due to building instability. It can make or break a thunderstorm forecast and we’ll be relying on it to help us out on Tuesday IF the front is slower…but caps can only hold for so long IF the instability is strong enough. Should the cap break…thunderstorms can develop from harmless cumulus clouds in a matter of 30 minutes or so. Basically it takes a broken cap plus good instability to go from something like this…

let’s watch for that on Tuesday…the hotter we get the better chances of severe weather where it is hotter. The latest from the SPC is this for Tuesday…they too see the strong cap in place…but again it can be overcome IF, like the EURO is showing we’re or areas south of KC are in the 85-90°.

The front that comes through will then stall…and gradually retreat northwards on WED. This is where things get dicey…retreating warm fronts with sharp temperature contrasts, as this will have + thunderstorms are VERY concerning to meteorologists. It’s a recipe for rotating storms bringing larger hail and worse to areas affected. Where exactly this front set’s up is to be determined. In a weird way…show there be strong to severe storms later Tuesday near or south of KC, the front can be pushed farther southwards, making it’s trek back north even longer on WED…perhaps protecting the KC area…so a lot of how things play out Tuesday may effect things Wednesday. Model data does show the front very close to the I-70 corridor later in the afternoon. Again this is concern.

Then on Thursday…the main surface low will push into NE KS during the peak heating (potential). Temperatures near 80° (or higher) + storms + surface low = severe weather (assuming the cap will break). That surface low position in NE KS on the EURO is concerning for rotating storms in the region. It should be noted that the surface low position obviously can change a lot between now and then. The GFS model has it farther north towards the I-80 corridor between Des Moines and Omaha. With that set-up….WED would be the nasty severe weather day of the region and THU is OK with the worst of the storms split around KC…some towards the bootheel and southern MO and others up towards and north of I-80. Should any storms penetrate a weakening cap on THU they would be flying towards the NE at 50 MPH…and the odds of that happening would be east of KC per the GFS…because the KC area would be dry slotted with the surface moisture towards central MO…while our dewpoints would be tanking from the 60s in the AM to the 30s in the PM hours.

So there is a lot out there to discuss and write about…as I mentioned though at the top of the blog…it’s also a great opportunity to prepare for severe weather and to remember that even in “slow” seasons there are violent outbreaks of damaging and deadly storms. I’m NOT saying that is going to happen in KC…I am saying that it’s a good idea to have a plan in place in case we are threatened but more than your average thunderstorm.