Good afternoon…the skies here at the house are breaking up a bit and there is some sunshine starting to poke through. Temperatures are near 60° and we may go up another 5° or so this afternoon. That’s pretty remarkable compared to the minus 23° wind chills of Wednesday morning! No records today but still very doable despite the winds out there. A cold front will put an end to this around daybreak Monday and send temperatures down in a hurry in the morning before leveling off in the afternoon. That push of cold air will be a key to the forecast for the next 3-4 days.

Tonight: Clouds and mild with temperatures remaining in the mid 50s. Breezy too.

Monday: The front should arrive sometime on the northside around 6-7AM and on the south side around 7- 8AM give or take 1 hour. This will mark the end of the nicer weather. Temperatures will drop from the mid 50s to the upper 30s very quickly…perhaps go down a few more degrees and then steady out in the afternoon. Overall highs tomorrow afternoon should be in the 35-40° range. NW winds of 10-25 MPH will make it feel colder too

Tuesday: Increasing clouds and cold. Highs in the upper 20s. There may be a patch or two of freezing/drizzle mist as well although that is not set in stone

An interesting weather week is at hand this week. It doesn’t necessarily mean a LOT will happen for active weather…but there is potential for mayhem for sure. Right now there isn’t a strong signal for a big storm for the KC area per say BUT sometimes little amounts of wintry weather can create issues and that’s what could happen.

Let’s start with tomorrow…just a return back to average after several days of highs in the 50s and 60s (today). The front tomorrow isn’t really overly strong…it’s a typical winter front really BUT since it’s replacing an air mass that is very mild…with a more seasonable air mass it will feel colder for sure as we watch the temperature trend downwards quickly in the morning. Here is the noon surface map showing the temperatures in RED…sub-zero cold up there… 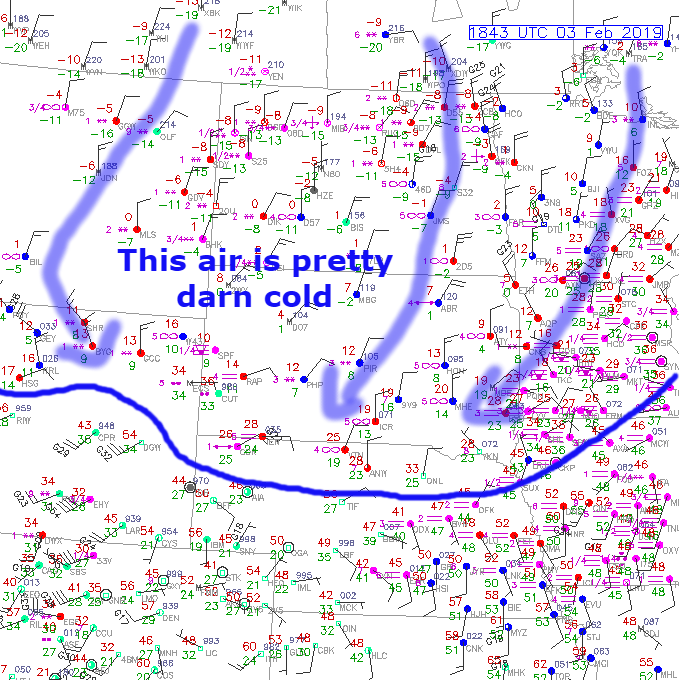 When I see a strong high in the far northern reaches of Canada and that high is building southwards…I tend to think that the models are underestimating the strength of the surface push of the colder air mass.

See that HIGH up towards the NW Territories…that HIGH is forecast to move towards the northern Plains Tuesday.

IF we go up towards Canada…well below zero at the noon hour.

By Tuesday the front will have stalled towards the southern Ozarks, well south of KC. 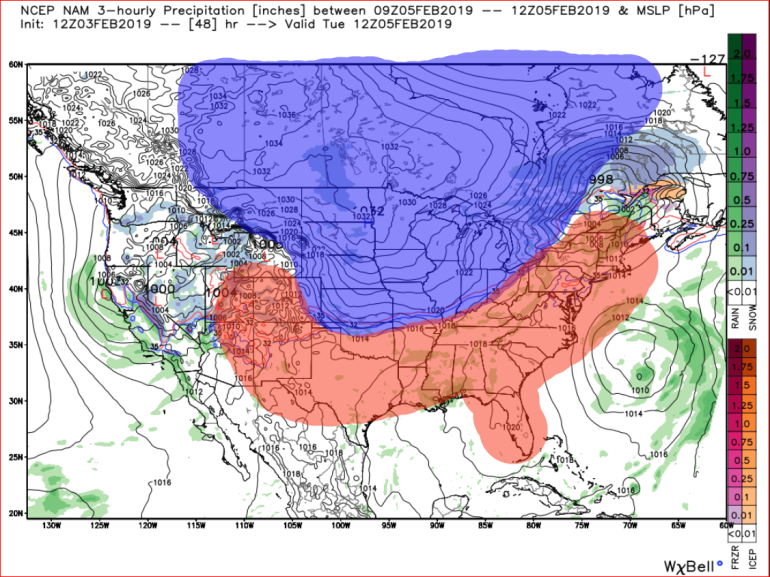 The cold dense air will just sort of get stuck here.

That is what we call an inversion…warmer air trapping in the colder surface air. The winds at that level are blowing from the SSW to the NNE and that is what we call overrunning. Since the cold air is denser or heavier in a sense…it stays nearest the ground…and the warm air, since it’s lighter, stays above it. In a way…think of oil and vinegar. The graphic below is from the University of Illinois and shows what’s about to happen. Picture that warm front, denoted but the red semicircles towards the lest side…being the front down toward the southern Ozarks in the forecast map for Tuesday above.

Most often “something” happens in these cases. The very act of the warmer air overriding the colder air generates lift. This lift will for sure manifest itself into clouds and from those clouds you often can get some wintry precipitation. Sometimes it can be an ice storm…other times it can be just some light freezing mist/drizzle. I’m on the side of a light, in amounts, event since there is no wave really coming out of the WSW aloft to help to boost that lift even more…

So as a result we need to be on the watch for some light freezing mist/drizzle especially later Tuesday and into Wednesday morning at least. It may not be much at all…but those scenarios are concerning because of pavement impacts.

Wednesday in itself is a toughie. The cold air may erode somewhat as the day unfolds…we’ll be starting in the mid 20s and with luck we may get to near 32° or above during the day. This means whatever falls will have less of an impact.

Then finally a storm shows up later Wednesday into Thursday.

This storm should ride along the front which will remain towards far southern MO. Cold air can be VERY tough to dislodge and I think some of the model data (GFS I’m looking at you) is out to lunch with a push northwards of the storm towards the area.

So with this more southern thought in mind…it’s going to be tough for us to have something really significant. Let’s hope (assume) we’re above 32° Wednesday afternoon (not set in stone yet)…the storm passing towards the MO/AR border will tend to draw down deeper cold air…allowing the removal of this warm layer above us and drag down colder air through the atmosphere. This means the increased potential for at least some snow Thursday morning especially.

This would be followed by some pretty cold air (not like last week-but still cold!) on Friday. IF there is snow on the ground and IF we have clear skies…we may get to near 0°. A lot of assumptions on that one. The snow on Thursday…won’t be a lot but could be “something” more than a dusting.

There are a lot of juggling balls with this as is typical with these wintry mix type events. They often look like one thing from a few days away and turn into something else within 48 hours or so.

Our feature photo is from Travis Wessel taken this morning with the fog over the ice in Smithville Lake. It was even thicker across far northern MO this morning too! Sort of a haunting picture! 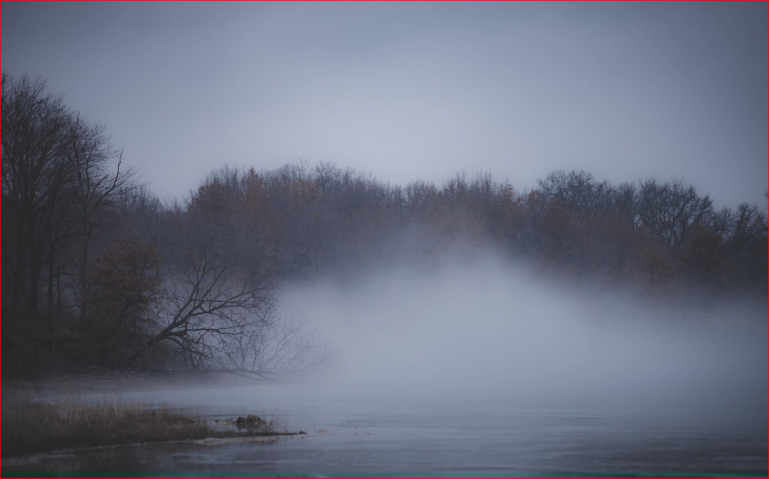 1,000 workers learn of potential layoffs at agency in Lee’s Summit