Good afternoon…a rather substantial storm is likely in the Plains over the weekend..Saturday especially. Near blizzard conditions are possible with the band of heavy snow that will be setting up. Today the model data has that band towards the NW of the Metro…this can easily shift southwards but there is increasing consensus that areas just barely NW of KC…we’re talking NW MO and NE KS may be more vulnerable than the KC Metro area to this. Heavy snow…30+ MPH wind gusts and dangerous near whiteout conditions are possible where ever that band decides to establish itself. Drifting and lowing snow is also going to be an issue as well.

Tonight: Variable clouds and cold with lows in the 20s

Friday: Cloudy with the potential of some mist or drizzle. Highs in the 30s

Saturday: Some light rain is possible during the day with increasing rain chances towards late afternoon. Temperatures will max out near 40° on the northside…milder farther south…then start dropping during the evening hours. There is still a changeover risk from the Metro northwards.

Sunday: Sunny and chilly with highs in the 30s

Some interesting weather is happening nationwide…first let’s go up to Minnesota…when Minnesota sets records for something winter related in February…it catches my eyes.

Curious about the snowfall records being set this February? As of Noon, we have set records at all 3 eligible climate locations, with updated totals through 6pm.

and more snow is coming for them…

Meanwhile our next weather maker is coming through the western US…interesting weather out there including accumulating snow in Vegas (again) as well as a good part of northern Arizona. I love that part of the country…

It has arrived! Expect an extended period of heavy snow. Snow will begin to taper off later on Friday. Be prepared! #azwx pic.twitter.com/0FychAYgmV

It is pouring down snow right now in Flagstaff, AZ…hit the play button!

Meanwhile…did you know that Lake Effect snow can happen…in Nevada? I had no clue…

Lake effect snow bands off Pyramid Lake this morning clearing out over the @CityofReno pic.twitter.com/mcJpdQkAlX

farther west…this storm has been prolific in the mountains of CA…and that will help down the road with the reservoirs.

Quite the snow pack across the state! Statewide it is 146% of average to date and 116% of its April 1st average. #CAwx pic.twitter.com/TSabi9FwYD 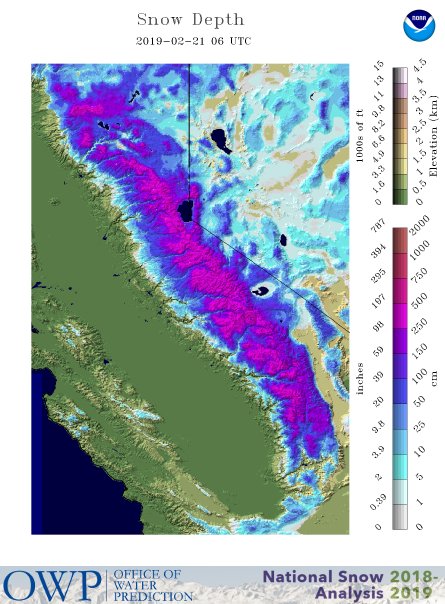 Right now 58% of the country has snow on the ground! 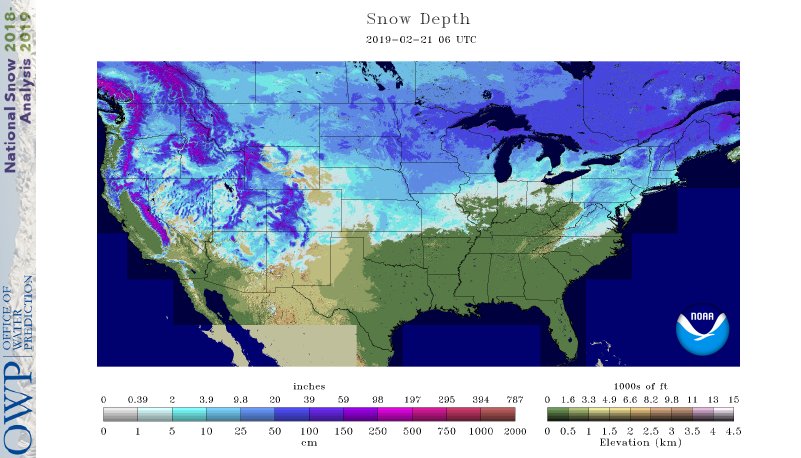 Look at the latest GFS ensembles…this is cold…and remember this is in °C. This would be from Tuesday>Sunday next week. That’s about 15-20° F below average…not good. 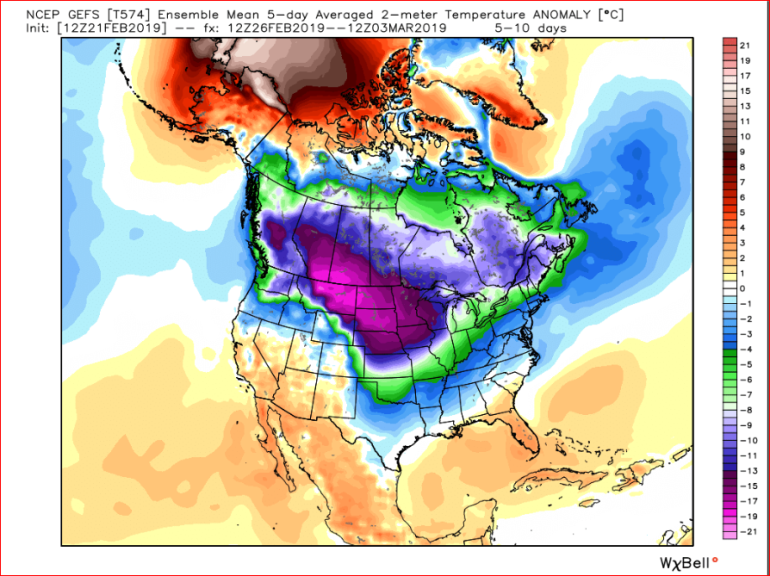 and then beyond that…from the EURO model…not good either. 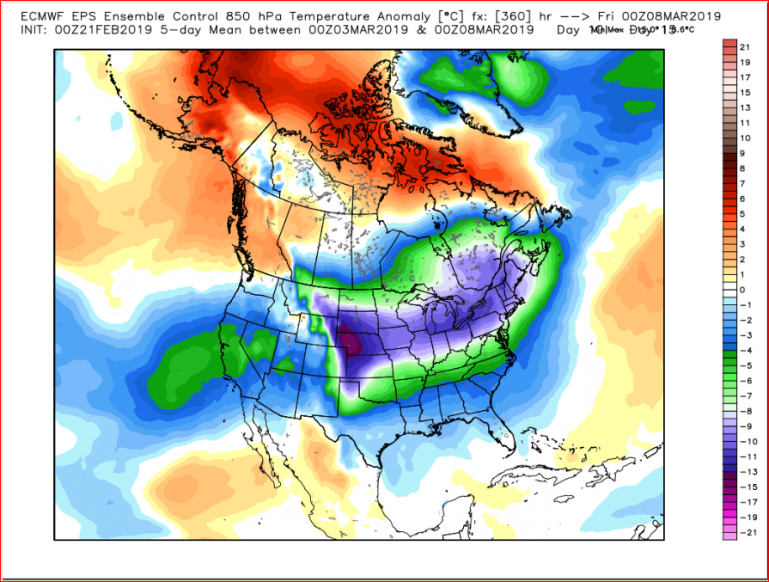 This doesn’t mean every day will be miserably cold…but the majority will I think.

Heck the EURO has this coming Monday>Wednesday only in the teens for highs…perhaps a bit drastic but it’s going to be cold…colder than some may think I believe…average too is approaching the upper 40s early next week…not so much…not even close really.

As far as March goes overall…this outlook doesn’t surprise me in the least.

Our initial March forecast anticipates increased chances of below-normal temperatures across much of the Great Plains and Mississippi Valley. Wetter than normal conditions are favored across the Gulf Coast and up the Eastern Seaboard. https://t.co/JI2DUuZKvx pic.twitter.com/tAt5vZE4GR

Our next storm system will actually try to bring warmer air northwards…still a lot of snow out there and that will brunt the fullest potential but at least we’ll be above freezing into Saturday.

The key to the snow/near blizzard conditions will be the track of the various features…and one easy way of looking for this is by tracking the main system above us…at around 18,000 feet. Let’s start at 3AM Saturday. For timing purposes…12Z is 6AM…18Z is Noon…00Z is 6PM. The maps go every 3 hours.

Notice how this comes right on top of KC…That is NOT a good track for heavy snow in the KC metro…you want to see something pass farther south of the KC area.

I want to flash you back to the blizzard in November…on Sunday the 25th…same idea as above…note where the core of the storm was above us…towards Bates Co, MO… 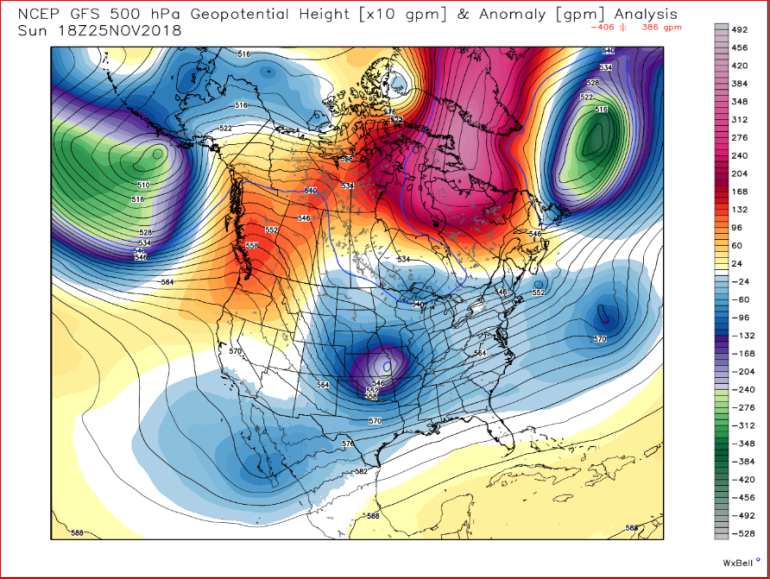 So now it’s time to think about this…IF the storm in November tracked 70 miles south of KC and we had a blizzard here…what happens IF the storm tracks on top of KC…where is the blizzard. Let’s see… 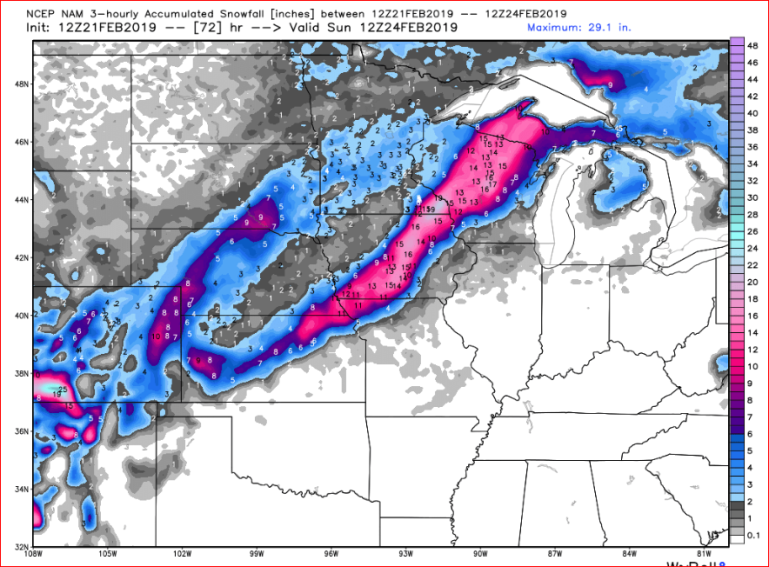 Don’t necessarily focus on those totals…and it will be impossible to measure anyway because of the wind.

Let’s just hope the track follows this idea…because remember what I said yesterday and on the air on Tuesday…100 miles or so in the world of weather is NOTHING from a few days out. Would a sudden track change closer to KC surprise me tomorrow…NO…BUT as we get closer to the event..we should get a better idea…and as long as the upper level storm that I illustrated above is near Amarillo 1st thing Saturday morning near daybreak…we should be OK I think…IF that upper level low is near Lubbock or even a bit farther south 1st thing Saturday…watch out! 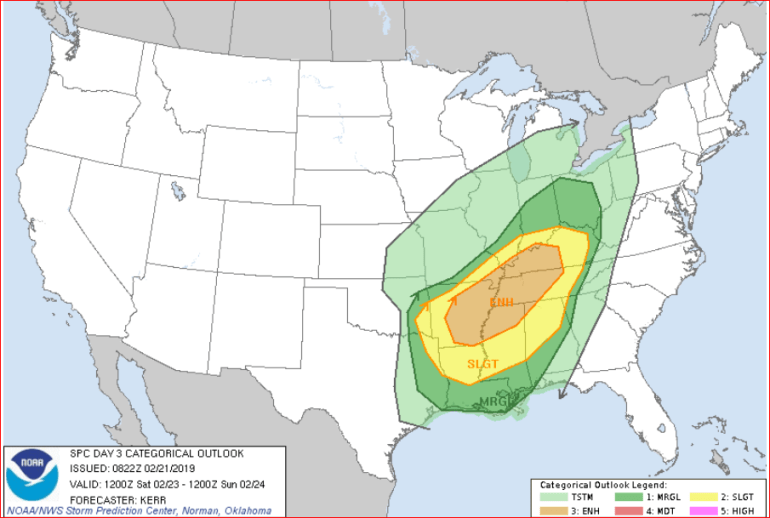 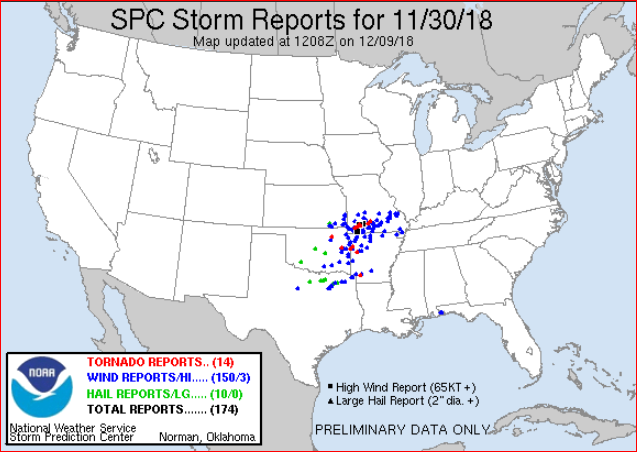 So this storm has a lot going for it. Again the data today indicates that areas JUST NW of KC…we’re taking 2-4 counties NW of the Metro will have the higher chances of nasty wind blown snows…does this mean we’re totally out of the woods…NOPE…but the data trends a re a bit more favorable for KC today…I had a feeling yesterday’s GFS model was too far towards the NW for the snow and I think the data today seems to fit the potential better.

Now we may still see a brief period of snow Saturday evening…but overall it doesn’t look too bad. One thing to remember wet roads>black ice for overnight Saturday into Sunday morning.

Our feature photo comes from Micky Zollinger Bates who commented that her husband is tired of shoveling! 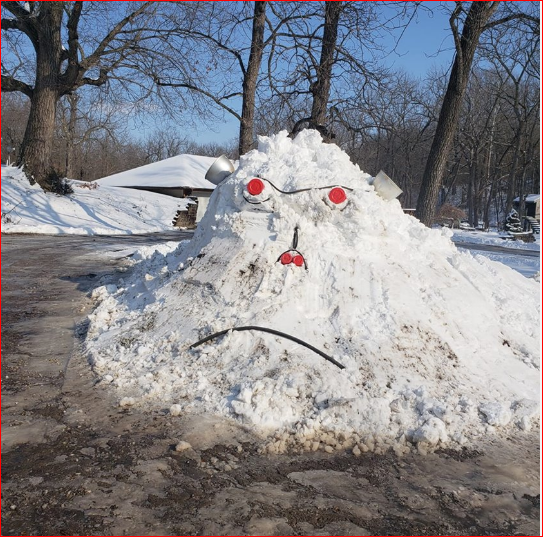 The snow system worked out well...with accumulations running anywhere from 1/2" to 2"+ or so. There might be a few areas out towards Clay Co that have seen close to 3".

Clouds will rule the day and probably a bit of the night as well. Temperatures will remain cold with readings today in the 20s. We'll see how much we drop off tonight. IF we clear out...we could tank to near 10° but I'm not sure we'll clear out.