The Winter Weather Forecast will be released this afternoon/evening. I will pre-release the information on the weather blog sometime before 3PM or so. I have most of it written but need to add a few things. I promised I would keep it a bit more concise this year…last year it was 3000 words long…this year it’s about 40% less…but I do want to add a couple of things before I get it out there. So today will be a two blog day!

Today: Cloudy with a little mist or drizzle possible just about anytime this afternoon. Amounts will be VERY minor, if any for most. Temperatures are starting out around 50° and we should get well into the 50s today.

Tonight: Cloudy and mild for late November with lows well in the 50s. Occasional patches of drizzle/mist are possible.

Tomorrow (Thanksgiving): Still doesn’t look great. We should salvage part of the day (especially through lunch or so). It will be cloudy all day long with rain developing as the afternoon moves along. The good news is that we will stay mild for most of the daylight hours it appears…that means temperatures will be close to 60°. The cold front will enter the area KC area later in the afternoon and when it passes the temperatures will drop 20-25° within 1-3 hours. More about all this in the discussion.

Friday: Cold with occasional sleet/ice pellets/freezing drizzle possible. Temperatures should be 30-35°. Typically we don’t have many issues with light sleet, especially with temperatures near or slightly above freezing. With that said, we will have to monitor the bridges and overpasses, especially during the non-daylight times. Areas in NW MO will potentially have more issues than the KC area.

For those of us who forecast the weather…we’re used to taking our lumps every so often. There are many occasions though when our attempts to forecast things that don’t exist days away though continue to play out with very few changes over the course of the days leading up to the actual event. This was one of the highlights of the weather blog back on the 19th…

“…that’s some pretty darn cold air lurking just to the NW of here. That cold air will come in at some point…either later THU or FRI sometime.

With such a temperature contrast and with SW flow prevailing…any little disturbance will be able to generate at least some areas of rain/mist initially in the milder air mass later next week. This type of cold air mass will initially be very “shallow”. That means that the air above us will be warmer than the air at the surface when that cold air finally moves into the area. That’s a recipe for the potential of some sort of freezing precipitation. So there is a LOT on the table for later next week and obviously A LOT (!!!!) will evolve. Again…something to be aware of, but not something to change your plans about yet…”

Well nothing has really changed…this has been a well advertised system on the way and it continues to play out as expected thus far. Really the only question is the exact timing of the cold front that will move through the area Thanksgiving Day. It certainly will be colder across NW MO than in the KC area during most of the day. We should have a high around 60° before the cold air hits on Thursday.

This front will deliver a rapid temperature drop along with strong N/NW winds as it passes through. Once those winds shift directions, that’s your indicator that the jig is up for mild air for about a weeks time. Those temperatures will drop and drop fast…combined with the winds, and miserable conditions are expected.

Today’s rain will be light and not much of a weather factor. Perhaps just a few patches of drizzle and mist. More or less the same is expected tonight as well.

Thursday’s rain will evolve our the course of the day. I don’t think it will rain all day long in KC…there may be more than a few dry hours in there…but the rain will not hold off all day long. Showers will be zipping through the area, really at any time through noon or so. Then as the afternoon moves along the rain will be increasing more and more towards the SW of KC and spreading up the I-35 corridor region into the KC area. Once it really gets going…it’s going to be tough for it to not rain. Adding insult to the turkey day festivities…once that cold front gets here, actually even ahead of it…but especially with and behind it…the rain will increase in intensity and there may even be a rumple or two of thunder. This is timed out, right now, for 4PM-10PM or so…right during the heart of the Plaza lighting ceremony.

The bottom line for that traditional part of the KC holiday is it’s either going to be mild and wet…or getting progressively colder and wet. Either way…odds are heavily tilted towards the wet part. If the front can slow down 1-2 hours…we might sneak in the lighting with temperatures around 60° but NO promises. On the subject of temperatures…here are the forecasts from the hi res NAM model…showing the approximate temperatures as the day plays out..the timing of the temperature graphics are 6AM/Noon/6PM and 12AM early Friday (via WeatherBell) 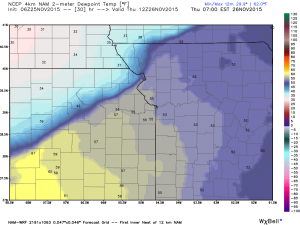 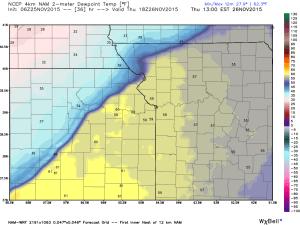 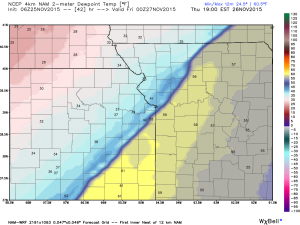 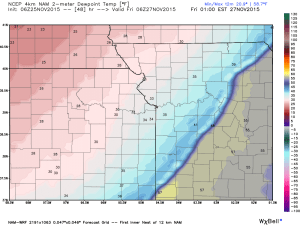 The takeaway is the big drop in temperatures across a short distance associated with the front…hence the concern about how things will change, temperature wise, rather fast. Also of note are the 15-25 MPH winds that will accompany the change.

Total rainfall from this tomorrow alone appears to be in the 3/4″-1 1/2″ range with heavier amounts possible SE of KC towards Sedalia and the Lakes region especially where some flash flooding is possible…extending down towards the I-44 corridor.

After the front moves through…and the cold air flows through the region…we will then contend with just how cold it gets…because obviously we get concerned about the roads with all the travel going on. At this point…I think temperatures in the KC area will be closer to 29-32° by Friday morning. In NW MO the air may be a couple of degrees colder and colder for longer. This could create some slick conditions, especially on bridges and overpasses for at least a short time on Friday. We’ll see of the daylight hours help the cause because of day’s “heat” warming up the pavement. Certainly though we’ll be watching the bridges and overpasses if nothing else. The NWS from Pleasant Hill created a nice graphic which I more or less agree with. 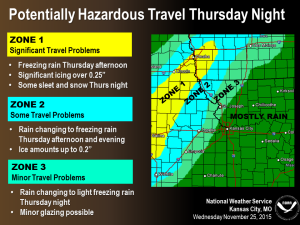 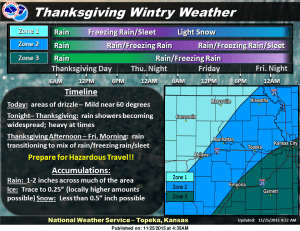 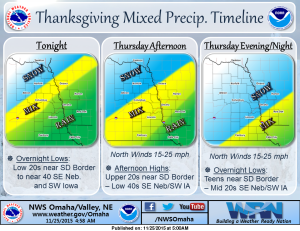 So I think you get the overall point…conditions worsen the farther NW you get away from the KC area later tomorrow into Friday.

Another aspect of this soon-to-be mess is what happens into the weekend…cold air will be in place for sure with temperatures in the 30s. We will be in SW flow aloft which means any little disturbance will be able to generate little areas of precipitation…while the air aloft will not really support snow…the air closer to the ground would support some sort of sleet/freezing rain combination…again the night time hours would be the most concern around the KC area as we lose the daylight “heating” and the roads/pavement get a bit colder. Something to monitor…although I think you should be able to get around. To reiterate…this is NOT a snow set-up for KC…

Again the winter weather forecast is coming out during the afternoon.

The cold front has already passed us by this morning, and temperatures will be dropping for the rest of the day. Expect temperatures to flatline or slightly cool north of I-70, while those to the south climb into the low 60s before completely moves through this evening. This cool punch opens the door to snow showers tonight moving in from the west that'll impact your Tuesday AM drive. While most roads will just be wet, elevated roads and bridges may be slick.

A Winter Weather Advisory goes into effect tonight at 10 PM until 10 AM tomorrow for the snow. Cold overnight lows will follow Tuesday night into Wednesday, prompting a Freeze Watch area-wide for Tuesday night.

KANSAS CITY, Mo. -- A Winter Weather Advisory has been issued for much of the metro heading into tonight as the threat of snow becomes more and more imminent.

The advisory lasts from 10 p.m. tonight to 10 a.m. tomorrow morning. Tonight's temperature will sink just below freezing, encouraging frozen precipitation as a cold and wet system moves in from the north.