Rest of today: Mostly sunny with deep blue skies. Any morning fog will burn off over the next few hours. Highs today should be in the 70-75° range. North winds of 5-15 MPH

The one system we’re tracking for the next 5 days (there may be something next week sometime) is an upper level wave that will move well north of the KC area WED into THU. It should however, create at least some showers to the west of the KC region later WED…and it would be that area that would drift our way and potentially weaken overnight WED into THU AM…so what’s left of that is our rain chance on THU. It doesn’t look like a lot (<1/2″ if not significantly less than that) but we’d actually be in a position that we could use some moisture for the top soil since we’ve dried out a bit after such a wet start to the month.

Aside from that we’ll warm up even more heading into the weekend and early next week…with 80°+ potential in spots over the weekend, especially Sunday it appears (more wind too).

On another note, the fall color season is in full swing now through the region as the colors will be peaking in many areas this week around the KC area. Some have already past peak but there are some great colors for all to enjoy. Some of the pics that we’ve received via FB and twitter have been fantastic (keep ’em coming I may show more tonight.

This picture was shot by Michael Kuhns via FB

So did you ever wonder why the leaves get their great colors?

It’s all because of chemicals! (via compoundchem.com)

“With autumn looming on the horizon, the leaves on some trees have already begun the transition towards the vibrant hues of autumn. Whilst this change may outwardly seem like a simple one, the many vivid colours are a result of a range of chemical compounds, a selection of which are detailed here.

Before discussing the different compounds that lead to the colours of autumn leaves, it’s worth discussing how the colours of these compounds originate in the first place. To do this we need to examine the chemical bonds they contain – these can be either single bonds, which consist of one shared pair of electrons between adjacent atoms, or double bonds, which consist of two shared pairs of electrons between adjacent atoms. The colour causing molecules in autumn leaves contain systems of alternating double and single bonds – this is referred to as conjugation. A large amount of conjugation in a molecule can lead to them being able to absorb wavelengths of light in the visible spectrum. This leads to the appearance of colour.

Chlorophyll is the chemical compound responsible for the usual, green colouration of most leaves. This chemical is contained within chloroplasts in the leaf cells, and is an essential component of the photosynthesis process via which plants use energy from the sun to convert carbon dioxide and water into sugars. For the production of chlorophyll, leaves require warm temperatures and sunlight – as summer begins to fade, so too does the amount of light, and thus chlorophyll production slows, and the existing chlorophyll decomposes. As a result of this, other compounds present in the leaves can come to the fore, and affect the perceived colouration.

Carotenoids and flavonoids are both large families of chemical compounds. These compounds are present in the leaves along with chlorophyll, but the high levels of chlorophyll present in the summer months usually masks their colours. As the chlorophyll degrades and disappears in autumn, their colours become more noticeable – both families of compounds contribute yellows, whilst carotenoids also contribute oranges and reds. These compounds do also degrade along with chlorophyll as autumn progresses, but do so at a much slower rate than chlorophyll, and so their colours become visible. Notable carotenoids include beta-carotene, the cause of the orange colour of carrots, lutein, which contributes to the yellow colour of egg yolks, and lycopene, which is also responsible for the red colour of tomatoes.

Anthocyanins, are also a member of the flavonoid class of compounds. Unlike carotenoids, anthocyanins aren’t commonly present in leaves year-round. As the days darken, their synthesis is initiated by increased concentration of sugars in the leaves, combined with sunlight. Their precise role in the leaf is still unclear – there has been some suggestion, however, that they may perform some kind of light-protective role, allowing the tree to protect its leaves from light damage and extend the amount of time before they are shed. In terms of their contribution to the colour of autumn leaves, they provide vivid red, purple, and magenta shades. Their colour is also affected by the acidity of tree sap, producing a range of hues.” 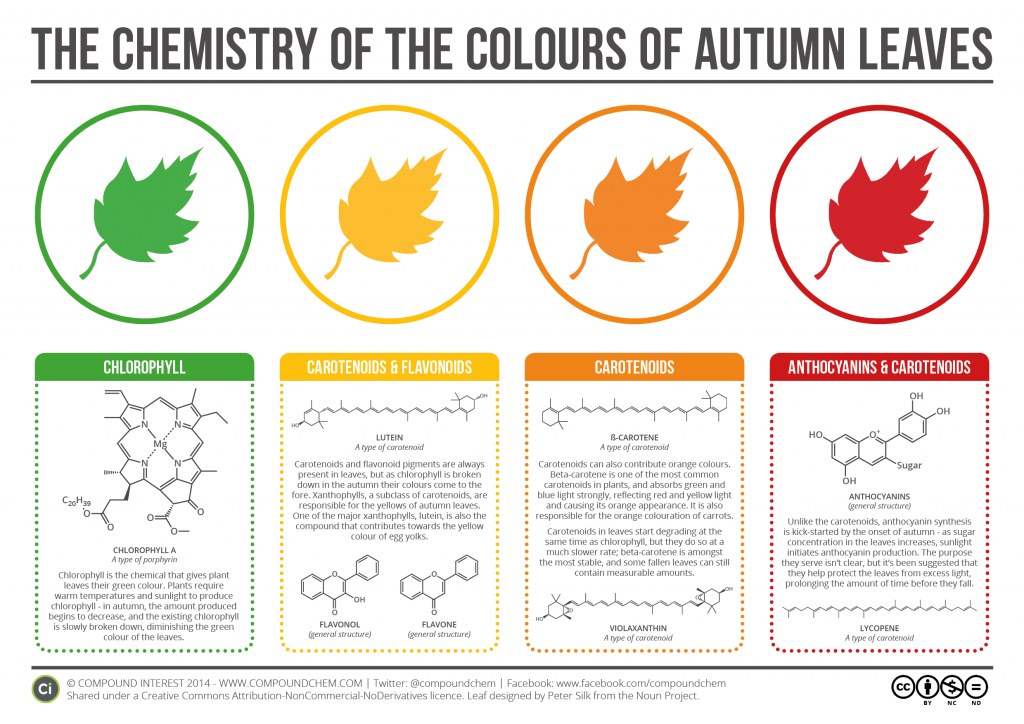 So now you know…bottom line is that they’re amazing to see and with the World Series starting tomorrow night right here in KC…for some reason they look even better! To bad there aren’t any BLUE leaves out there!