Good morning…took a couple of days off from the blog as I was filling in for Mike and was a bit blog burned out after all the comprehensive blogs associated with Florence last week and before that. Today will wrap that storm up…and also talk about the two seasons that will be with us this week…summer and fall. Both will be felt strongly and you can really see the changes in how the pattern is adjusting right now…stronger cold fronts and at least some rain are all on tap for the area.

Today: Hot and humid with highs 92-95°. The record is 95°. Something that is a bit different is the breeze that will be increasing this afternoon to 15-20 MPH.

Tonight: Windy and warm with lows in the 70s

Friday: Any showers in the AM should be brief then becoming partly cloudy and cooler with highs closer to 70°

A lot of wrapping up on Florence in my twitter feed and I wanted to share that information with you. One issue is that the weather community is starting to realize more that the way we “grade” the current status of a hurricane needs to be looked at. I’m talking about the the assigning of category numbers. The media, including the TV weather folks are very focused on this as we track a hurricanes progress. Is it a category 4 storm…is it strengthening or weakening to a category “whatever” storm.

The problem is…this is solely a wind based system. As we saw with Ike about 10 years ago…and again with Florence…and with research…viewers and the public hear the “category” number and make assumptions…especially when it comes time to evacuate or not.

This is becoming a bigger problem because IF the storm is still packing a huge flood threat…aka Harvey and Florence…folks aren’t reacting as well as perhaps the could. They tend to be more dismissive of the storms outcome despite hearing about what will happen. They assume that because the wind aspect alone is weakening…or isn’t as strong as a few days ago…that the storm will be “no big deal”.

As weather communicators…we’ve sort of done this to ourselves…from the NWS…to the media to others. We’ve unintentionally sort of created this situation. Now some are wondering IF there could be a better way of communicating the potential…some sort of combined process to evaluate a hurricane and it’s related disaster potential. Perhaps a new way of classifying the storm. It’s complicated to say the least.

We need to figure out a better way of communicating this.

Preliminary rainfall totals from #Florence for SE NC and NE SC. Highest total in SE NC was 35.93 in. measured in Elizabethtown, NC, and highest in NE SC was 23.63 in. in Loris, SC. #scwx #ncwx pic.twitter.com/s9KIeVgBPH

Almost 36″ of rain in spots of NC. Almost 24″ in SC…both breaking state records for the most rain from a tropical system in records weather history.

We did…we knew about this potential when we knew the storm would waffle around for a couple of days. Again though…many keyed in on the “category” factor and NOT the flood factor.

The wind factor was bad…but in the scheme of things didn’t do nearly that much damage.

Again though it was the long lasting and not ending soon flooding from these slow moving storms that has created the disaster that continues to unfold. From an environmental standpoint…there are a tremendous number of hog farms that have been flooded out. Think about what is in the flood waters in many parts of eastern NC…not pleasant.

Four states have broken their records for wettest tropical cyclone ever, just in the past year.

It was just so widespread…

The footprint for Floyd's 15+ was about 60% the size of Florence. Joaquin about 65%. Harvey's 15+ footprint was more than double that of Florence. What's crazy is the Carolinas have now experienced major TC-related flooding in 3 of the last 4 years.

Meteorologists nailed the track of the storm…within miles actually from days away. One of the best forecasts I’ve seen for a landfalling hurricane from the NHC. What we continue to have problems with is understanding the intensity fluctuations that the storms go through during their lifetime. This has been a long-standing issue despite the increase in atmospheric data that we’re getting now through satellites and recon aircraft and even special soundings. There is still sometimes a disconnect with that aspect of the forecasting. The ERCs…or eyewall replacement cycles might be the key to these forecast conundrums.

This is an animation of the entire life span of Hurricane #Florence since August 29, 2018 when Florence was a tropical wave moving off the west coast of Africa. Besides, Florence, you'll also see Gordon, Helene, Isaac and Joyce during this very active period in the Atlantic Basin pic.twitter.com/9r9V8JTvX9

Hurricane #Florence spent several days dumping about 11 Trillion gallons of rainfall on the Carolinas …
The final remnants of the storm will clear out of the Northeast by this evening … leaving a footprint of rain/flooding across much of the East Coast. pic.twitter.com/6FP4lX6Yvy

#Florence produced one of the most significant rainfall events on record in the Carolinas. Over a large portion of the region, observed rainfall had an estimated less-than 1% chance of occurring in any given year, indicating a rare and historic event. pic.twitter.com/NZ15sO8D6i

So, how much rain did #Florence dump on NC? The estimate is around 8 trillion gallons of water… about the same amount of water as is being held in Lake Mead by the Hoover Dam. pic.twitter.com/39Rmc4qMEM

OK so let’s move on.

The last few days of summer are upon us. Yesterday temperatures went crazy…missing a record tying 96° by 2°. Today and tomorrow the records are 95° set in 1954 and 1948. Today is doable…I don’t think we get there tomorrow but will be close.

Another note…today will be the 57th day with highs 90° or above. That’s a lot…average is 41. Pales in comparison to 2012 though…during that summer! 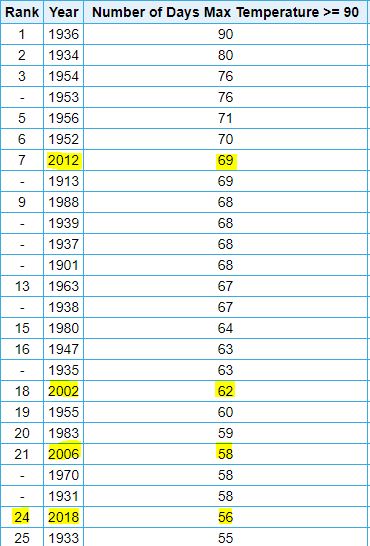 This will be ending soon.

A cold front will move into the area late Thursday night into Friday morning. There will be rain and storms with the front…again your results will vary from a rain standpoint. The front will be progressive so the rain won’t be long lasting. It should be out of the area sometime during the morning. With the front’s arrival in the wee hours of Friday though…the instability built up during the day…will be vanishing at night with the setting sun. It’s NOT a great set-up for a lot of widespread rain in the region. So don’t expect a lot from this front.

The cooler air moving in behind the front though will be felt, especially compared to these last few days with temperatures 20-25 degrees cooler on Friday…and then dipping into the 50s on Saturday!

An even stronger front (perhaps more rain) is setting up for later Monday into Tuesday. So the changes are starting. It’s very possible that tomorrow will be the last 90° day till sometime next spring! This next front is a big time cold front it appears…and will really be felt next week and into the end of the month as a much cooler pattern sets up to finish the month and start October!

Our feature photo comes from Starr Hardwick‎ …she said…Good morning Joe, it’s a beautiful morning. The sun was shining through the clouds over my roof of the house. So beautiful it looks like a waterfall in the clouds. Do you see it?