Good Saturday afternoon…we had some morning rains move through the region today…with over 1″ up at KCI…many though didn’t get nearly that much. This time the heavier rains favored the north side of the Metro into northern MO while areas farther south so less rain and more scattered activity.

Tonight the focus will be on a slow moving cold front that will struggle to move southwards through northern MO…that will be our next chance of seeing storms…and there are other chances tomorrow PM and next week…with the Tuesday night>Wednesday chance looking the best for next week right now…although we are in a zonal (west to east) flow next week…especially later in the week and that will bring disturbances our way.

The bottom line is that there will be more off and on rains for many areas for the next 7+ days or so…but how much and for who will be a big unanswerable question at this point.

Rest of this afternoon: Mostly sunny and warm…muggy too with highs into the mid 80s

Tonight: Storm risks increase later tonight…probably after 9PM or so. Some storms may be strong or severe with wind/hail being the main threats overnight. Lows in the 60s to near 70°

Sunday: Partly cloudy with PM storms possible wherever that front sets up…could be anywhere near KC and southwards. Highs in the 80s

Monday: Looks drier with highs in the 80s

And so we wait…we wait for that first 90° day which is still not coming anytime soon I don’t think. There aren’t strong signals of intense heat yet…every so often the models will try and heat things up in a bigger way and then back down again. There will be a chance anytime ahead of a front but that will require good timing and an overnight frontal arrival…but the data is still showing cold fronts coming over the next 10-14 days…and in June that will usually mean rain at various times.

Another issue is that the additional rains that come keep the terrain nice and green. That holds back on the potential heating by a degree or two sometimes as well. In other words when the ground is dried out and brown…it gets hotter faster…when green and moist is doesn’t.

This morning KCI had 1.09″ of rain and you know I’ve been following the wettest starts to the year here in CK…we’re back up to #2 and not far away from #1.

That chart below is from yesterday

So it’s wet out there…we know that…and we can see it from the satellite perspective as well as from the ground. Also from the raw data…this next month shows the soil moisture anomalies…wow!

Some areas though are slowly drying out…and during this time of the year…when evaporation can be 1/4″ or more from the top soil…the surface can dry out somewhat quickly…enough to consider watering for sure.

There are some areas across far northern MO that are a bit dry it appears based on the chart above.

Obviously with all that moisture out there…there isn’t much drought…anywhere really.

Patches here and there but overall that’s about as clean a report as you’ll ever see. The far NW part of the US is dry though…and they’ve been hot as well.

For our area though…it’s really not worth getting too involved at this point in the daily or every 2-3 day disturbances coming by…because they don’t really exist nor will they until the night before. That may sound like a cop out BUT I can tell you that the overall pattern into next week supports this potential…what does this mean?

Well aloft…up at around 18,000 feet or so…a series of disturbances will be traversing the Plains region. These typically form from thunderstorm complexes out in the eastern Rockies or eastern CO and western KS into western NE…then move from the west to the east and create and maintain storms as they move eastbound. Where each one goes (they can have a mind of their own sometimes) remains to be seen but we do know the pattern will support this type of situation…so now it’s a matter of figuring them out as we get closer.

The GFS-FV3 model tries…again these buggers won’t exist for another few days in some cases…so it’s tough to get too wrapped up in the specific placements of each little disturbance. Here is the map for Tuesday at 10PM…one wave in NE KS and more out wards SW KS and moving eastbound…hence the somewhat higher confidence in rain at some point later TUE into WED. 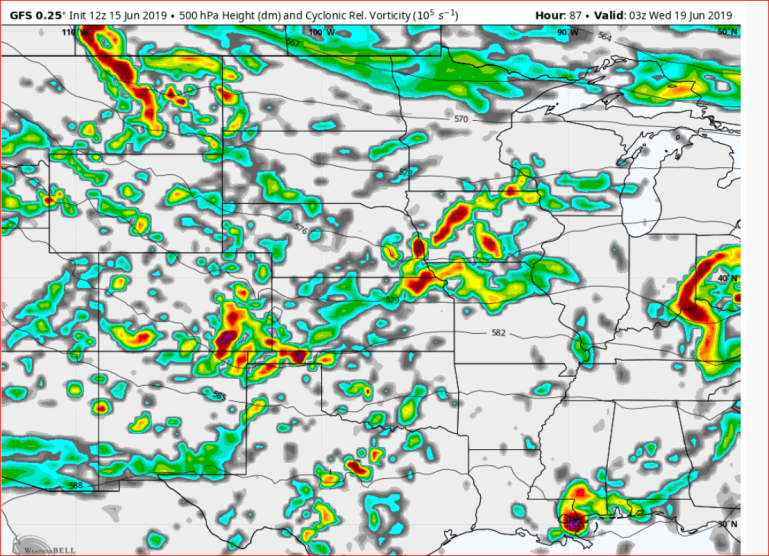 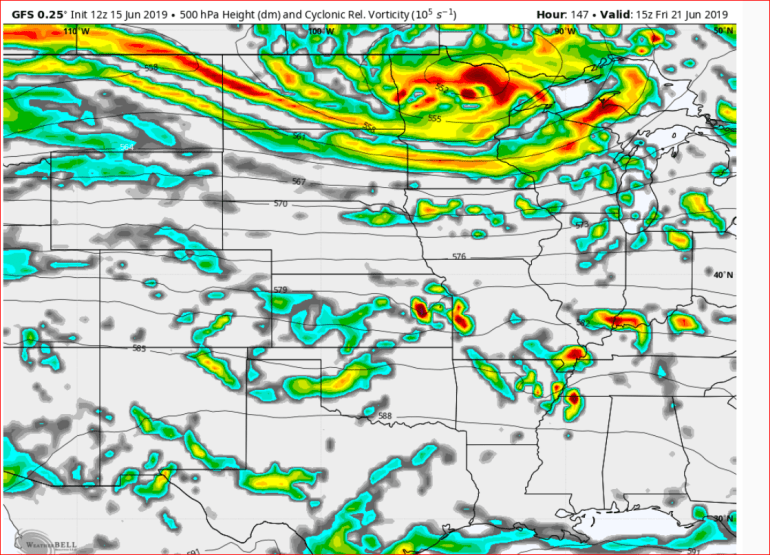 That would indicate later THU night>early FRI with another chance.

All this does is create lots of residual clouds in many cases…and that too may conspire to prevent 90° days in some cases…sort of like today really. 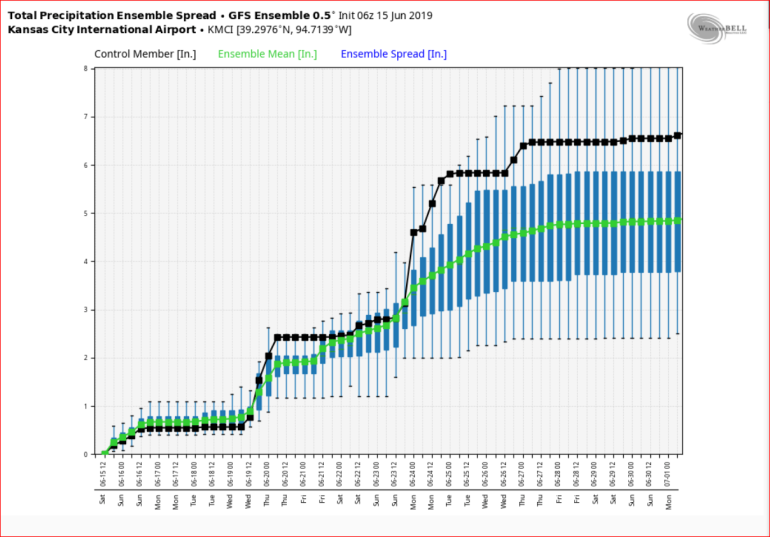 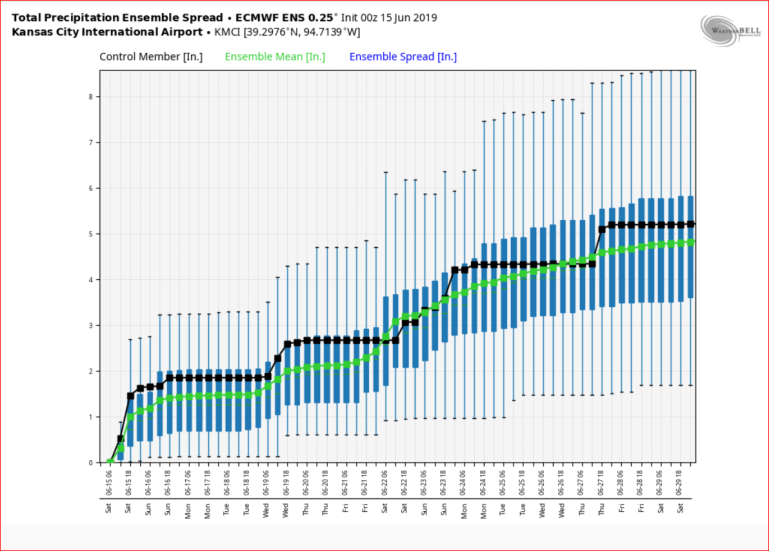 Over 4″…both these totals are well above average for the last 2 weeks of June.

Our feature photo comes from Brenda Hill in Olathe…pretty! 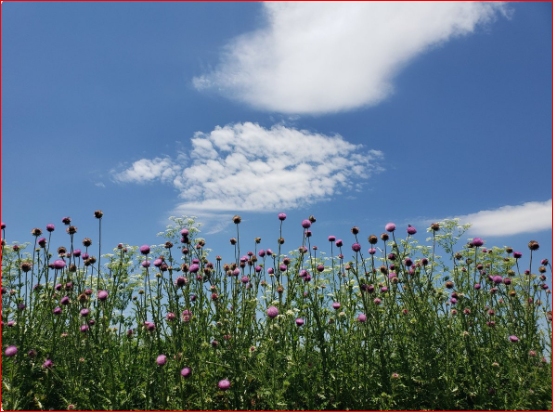