Good afternoon…not quite as comfy out there today compared to yesterday with temperatures about 20° cooler…but in reality it’s really just back to where it “should” be for the latter part of December. Overall the pattern favors cold…nothing crazy…with a few closer to seasonable days mixed in. Folks are wondering about the snow…and for KC…I think we’ll be seeing at least flakes…unless you go to bed before 10PM or so Saturday night…because whatever we end up getting…may be done falling by daybreak on Sunday. Beyond that…looks pretty boring (again).

Tonight: Gradual clearing and colder with lows dropping into the teens

Saturday: Mostly sunny followed by increasing clouds in the afternoon with highs well into the 30s

Saturday Night: Clouds lower and thicken with snow developing. It should be mostly light and really not start sticking till VERY late Saturday night into Sunday early morning. Lows near 20°

Sunday: Becoming sunny as the day moves along and seasonable with highs around 32°

Monday (Christmas): LOTS of high clouds…so at best filtered sunshine and seasonable with highs into the mid-upper 30s. There might be a few flakes scattered about.

The main item of conversation is what happens later Saturday night into Sunday morning.

Whatever happens will be of the light fluffy type snow…it will blow around a bit…there is still the potential of slick conditions in at least parts of the area Sunday morning (depending on road treatments).

There should be a pretty stout cut-off from flurries to lighter snow accumulations…that cut-off may be very close to the KC Metro area.

The snow will be coming about because of a wave caught in the flow. This disturbance or what we refer to as vorticity will create lift. The atmosphere will be plenty cold…so the lift will create precipitation in the form of snow.

There are issues however…one of which is the “strength” of the lifting and how long we have this lift zipping through the area. I’m thinking about 6-9 hours worth. There is also going to be quite a bit of dry air below the cloud bases that will need to be saturated. This may take 1-2+ hours to occur…so we may have snow aloft NOT reaching the ground for awhile.

The transient nature of the lifting…leads one to think how much of an accumulation can we end up getting…plus the path of the wave is precariously close to giving us flurries at best (if it scoots 50 miles or so farther north) or perhaps 1-2″ of snow (50-75 miles farther south perhaps). The cold air will allow those snow ratios to be higher than average…so IF an area receives 1/10″ of “liquid” equivalent…that could translate to about 1.5″ of snow…2/10″ of liquid could get you close to 3″ of snow. Remember there might be some evaporating going on initially as the snow falls…so your results may vary.

I continue to keep my “up to 1″ of snow” forecast thoughts for areas from KC southwards…north of KC towards 36 highway and northwards I going with up to 2″ or so. There could be some weird “sweetspot” snow amount of close to 3″ IF there are a couple of thin east>west bands set up that would create some brief moderate snow rates. Right now odds favor this being north of KC.

Again the path of this disturbance will be a key in what happens. Let me show you this better by taking you up to about 18,000 feet, or what we refer to as the 500 mb level. This allows us to look for “vorticity” in the atmosphere and the lifting mechanisms to the air mass above us. Vorticity refers to the tendency of the air to spin clockwise or counterclockwise in the vertical. When there is positive vorticity moving into an area…the air below that is rising and vice versa. I’m cutting out a few steps here…but when an area of vorticity passes to your south…you have a better chance of getting precipitation, there are other factors too. When it goes to the north, you have a better chance of being “dry slotted” for lack of a better phrase) and not getting as much.

Take a look at the model forecasts for Sunday morning around 12AM…note the reds…those are areas of better “lift”. Notice the subtle differences in and then “core” locations of the lift…also notice that the areas of lift aren’t exactly focused…somewhat haphazard in appearance. The GFS model is shown when you slide RIGHT…the NAM model is show when you slide LEFT.

It’s sort of a discombobulated mess really and not exactly a great set-up. Again I think there will be snow…but unless these areas of lift shift a bit farther south…

These varied differences play a role in how much actual liquid is generated…again…slider RIGHT is GFS totals…slider LEFT is NAM totals…and you can take a least a few hundredths off those amounts because of the needed saturation to get the snow to reach the ground…in my opinion.

With this smaller features I actually like to use a higher resolution model that sometimes can pick up on the subtleties of what may happen. Here is the morning run off the hi-res NAM model…notice the cut-off from near nothing to road impacting “liquid” equivalents. Multiply by 1.5 and you can see how some areas may close in on 2″+.

That cutoff on the model above is basically along the I-70 corridor.

Can this shift about 50 miles south…sure…can it shift 50 miles north (no good for snow lovers) sure. We’ll just have to watch the radar images developing later Saturday night and Sunday morning.

Beyond that…right now looks to be a yawner. There may be another system to track on Thursday through the Plains BUT that will have to dig in harder for much “brief” snow excitement locally.

I hate where the pattern goes into next weekend…dry…chilly and fast NW/WNW flow aloft is NOT conducive to “exciting” weather locally. It is favorable to off and on cold shots though. Blah.

Our feature photo comes from Gary Reid out towards Oak Grove, MO 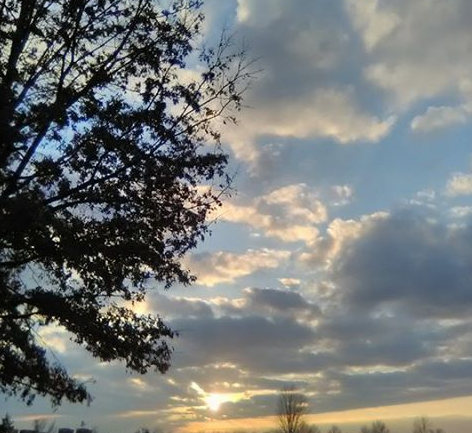