Good morning and happy Thursday. Another more or less great December day is on tap with some subtle differences compared to the near 60° days that we’ve enjoyed since Tuesday. There should be more clouds in the skies today especially this afternoon and the other is a pick up in the winds a bit more today…nothing crazy but a bit more of a breeze this afternoon I think. In the end though it’s very possible that today is even milder than the last two days.

A cold front will work through the area overnight into Friday and that will shove the warmest air southwards…it will come back to some degree though over the weekend before getting shoved away for a few days sometime Monday into next week.

Tonight: Variable clouds and not terrible with lows in the 30s

Tomorrow: Chillier but still pretty seasonable with highs in the 40° range in the afternoon

Saturday: Partly cloudy and cold at first…highs in the afternoon around 50°

Sunday: Should be milder with highs in the upper 50s again with increasing clouds and filtered sunshine.

Really you can’t do a lot better that the weather for early December right now. Mild afternoons without all the typical wind that we get when we do warm up in early December. Again today a bit more of a breeze may develop but temperatures will still be well above average. Even this morning (through 7AM) our low is about 10°+ above average. The average high by the way is 43° for today…we should be almost 20° above average before the day is done assuming we get enough sunshine during the course of the day.

There will be a disturbance coming out of Utah later today that will be zipping towards Tulsa and Texarkania overnight in Friday. This will pass well south of here and aside from some clouds it’s tough to see how we get any moisture from this…perhaps some isolated showers towards the Lakes region and down towards I-44 overnight into Friday early morning.

This disturbance though will allow some cooler air to filter southwards tomorrow after 12AM…it will be a gradual transition though…nothing really harsh…and tomorrow instead of 50s+…we’ll be more in the 40-45° range and again more dry weather expected.

Over the weekend…a conundrum of sorts…at least for Saturday. The colder air coming tomorrow will push down towards the Ozarks and southwards…then on Saturday the winds will shift towards the south and we should start to moderate a bit. We’ll start out cold…probably 20-25° and I’m not as confident that we’ll be able to push much above 50° during the afternoon. We’ll in a sense be recirculating some of the cooler air back northwards for awhile before we warm-up more efficiently towards the afternoon.

The NAM model has had some real issues of the last few months…in terms of it’s forecast temperatures…there a re a few things it’s been just wrong about…on almost a daily basis…one of which is underforecasting temperatures and the other…typically because of trapped low level moisture that prevents temperatures from reaching their potential. Some of the other models aren’t having that issue. The warmth above the surface is going to be getting there during the day and increasing towards evening. That is a good sign.

The end story of this is that while we should be above average again on Saturday I want to take a bit more of a cautious approach to the extent of the warm-up…that’s why I think 50° or so is doable with a higher potential on Sunday. The only issue for Sunday is the potential for clouds but we’ll start warmer and should have some wind to help the cause as well. So highs well into the 50s are more likely…the issue again here though may be clouds…if there are too many clouds we will not realize that potential.

A couple of cold shots of air are coming next week…including Monday…not terrible…back to average. Perhaps a reinforcing shot sometime Tuesday evening into Wednesday AM…that may have a tinge of arctic air to it…but the bulk of the really cold air will be more towards the NE of the region and the upper Midwest…where -10 to -20° temperatures are possible in MN and WI where there is some pretty decent snowpack on the ground.

That snow cover with the arctic air…is a good combination for some bitterly cold weather up there. 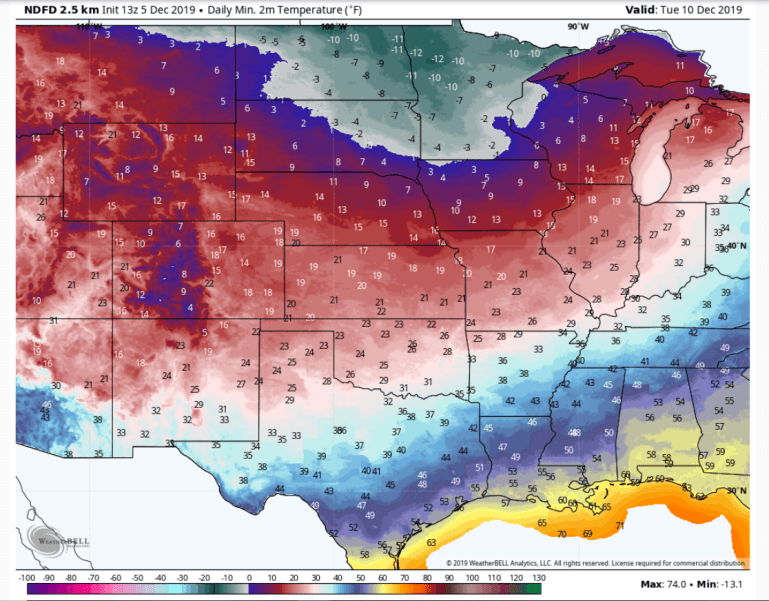 and Wednesday morning of next week. 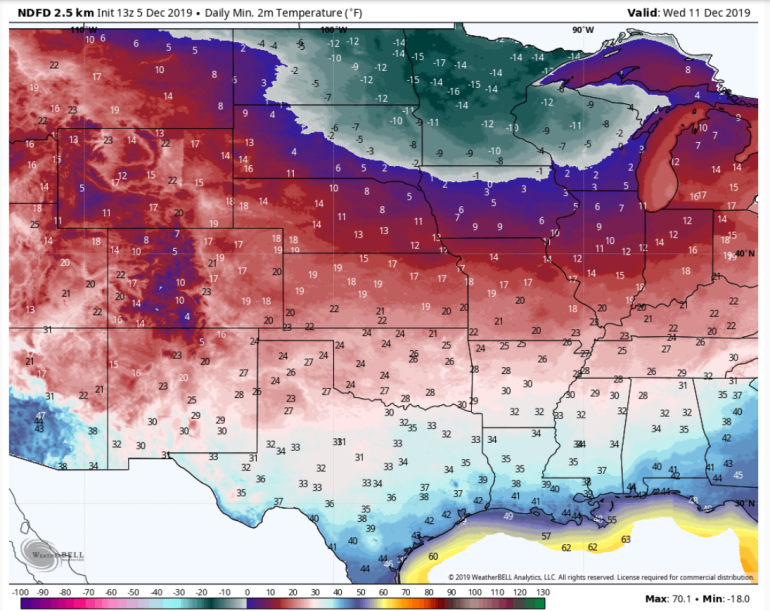 Yeah it’s chilly up there!

Fro those wondering about the snow situation…nothing really looks impressive right now to me…I don’t see any glaring systems that scream snowstorm at this point. The cold air intrusion on Monday into Wednesday may tend to relax quickly on Wednesday into Thursday.

The EURO ensembles aren’t so great looking for snow wishers at this point. 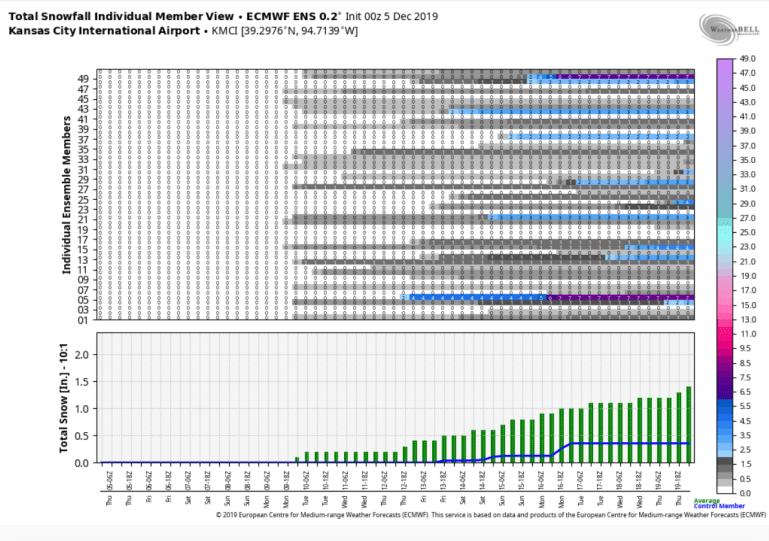 There are a couple of members of the 50 or so data points above that are bullish after the 15th…but overall that is not a lot of snow ahead through at least mid month.

The thing to watch is maybe some weird disturbance can come down in the NW flow aloft…but that is a needle in a haystack thing at this point for us locally.

It should also be noted that the GFS model is a LOT colder next week and a bit beyond. IF we go up to about 5,000 feet or so and look at the temperature anomalies…you can see the difference… 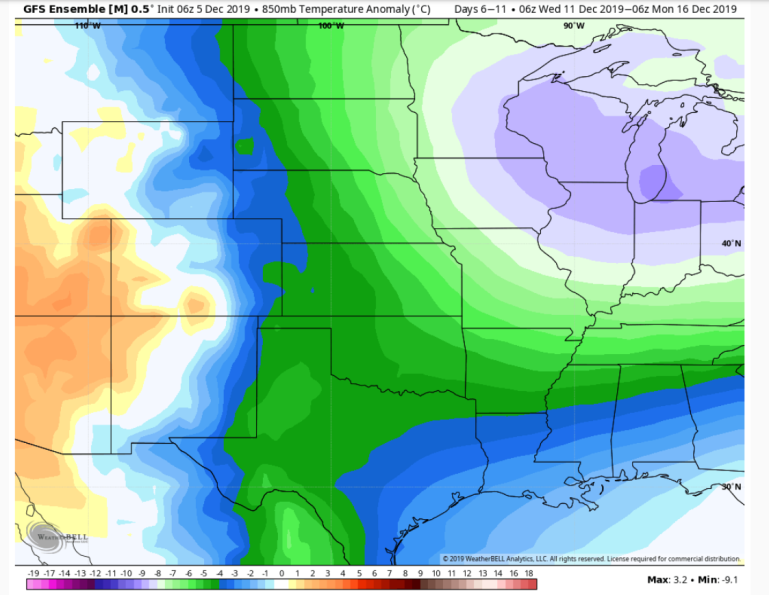 and now the EURO… 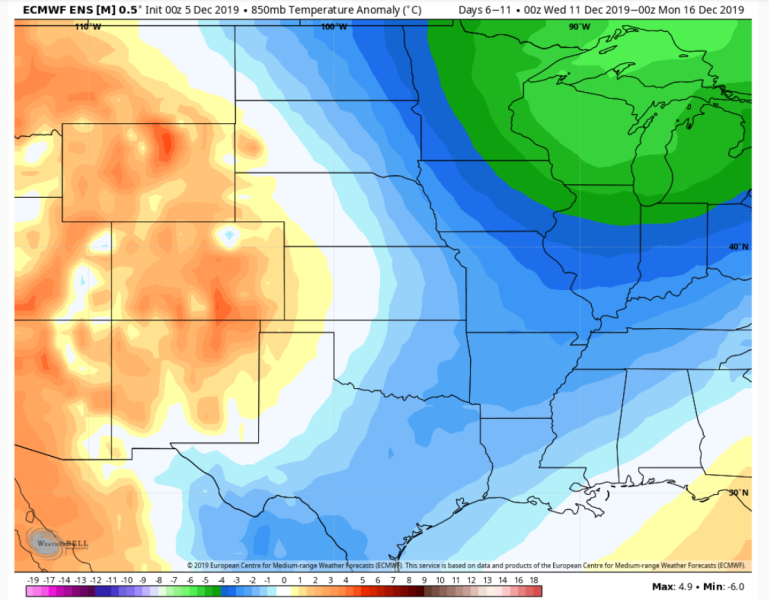 Not quite to the extreme, although both agree on the coldest air up towards the Lakes region and the upper Midwest.

The maps above are a 5 day average of temperatures at 5000 feet or so from the evening on the 10th through the evening of the 15th. 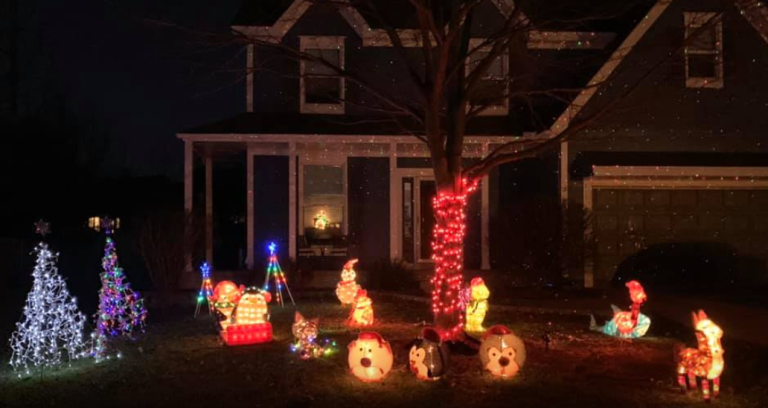