Good morning…not exactly a nice start to our day as rain is sort of just stuck on the I-35 corridor as I type this up. In time there will be a gradual fading of the rain near or just after lunch. The clouds though may not be going anywhere and as a result temperatures today will be struggling in the 50s for the day as a whole. It will get better for about a a day and a half before rain chances return over the weekend…then it gets better…then perhaps a bigger and more significant Plains spring storm takes shape next WED/THU.

The bottom line is the active weather pattern continues as storms are lined up through the middle of the month at least…and probably beyond. This is a wet pattern overall and a wetter than average April is now under way I think.

Today: Rain this morning then clouds this afternoon with light winds…highs staying in the 50s

Tonight: Clouds and not too cold with lows in the 40s

Friday: Should be nicer, especially in the afternoon. The amount of sunshine will determine if we’re closer to 70° or closer to 65°…not a lot of wind though.

Saturday: OK with increasing clouds and milder temperatures and highs 70-75°. Some rain is possible Saturday night into Sunday.

Sunday: Showers possible but not really that cool with highs well into the 60s

Let’s start with radar because while the rain amounts haven’t been too generous…mostly under 1/4″ so far…it’s a nuisance for sure.

Here are the doppler indicated totals…this may wipe clean in the afternoon as the rain fades.

There are some near 1/3″ totals in parts of JOCO, KS

This whole thing is part of an upper level system that is spinning through the southern US.

There will be a risk of severe storms today towards the deep south. Not here though. Wind and hail are the main threats.

The weather issue for Friday is how quickly we see clearing…this system today is going to leave a trailing batch of moisture/clouds on the region…and the winds at the surface and above us are going to be negligible it appears so there really isn’t to stir things up all that much. Hence the lingering cloud cover scenario for awhile on Friday.

A piece of that will break off…on the far south side…then come through the SW part of the country…swing into western TX later Friday and swing up towards the NE on Saturday into the Plains. It’s sort of not really organized but there will be moisture in the atmosphere and this being Spring…it doesn’t take much to get at least some rain going…maybe a few rumbles too.

How long that piece lingers and perhaps a 2nd chunk passing south of here on Sunday will determine how long the rain lasts on Sunday.

I do want to point out a system that I referred to last night on the air…one that should significantly warm us up…perhaps leading to our 1st 80° day (depending on the cloud cover issue). The system that I’m keeping an eye on is wayyyyy out in the western Pacific…it’s sort of tough to make out but it’s this system off the coast of Japan and southwest of the Aleutian Islands.

Obviously thousands of miles away…but it’s worth watching because something will break off of that and swing through the Pacific…how it does remains to be seen but some model data is rather bullish on the intensity potential of this in the Plains next WED/THU. Granted a week away…but this could be a severe weather set-up in the southern Plains or farther north towards our “region”. Worth watching at this point since I like to get into that time period sometimes on the blog.

That storm may be important next week…because of something I wrote about a couple of days ago…and that’s this…the mid-month chill. So we’re going to warm up and stay mild>warm for about a week. Things are going to grow and flowers will start to pop…the concern I have then would be a return to several+ days of colder weather and the potential, depending on clouds, of freezing temperatures returning towards next weekend perhaps. Again fodder for next week.

The overall pattern is mild into the middle of next week…as a matter of fact I think gardeners are going to be in good shape in terms of a lack of freezing low temperatures. That may well change towards mid month however (at least for lows).

Our feature photo comes from Tami Camlin…up in the Northland from a few days ago. 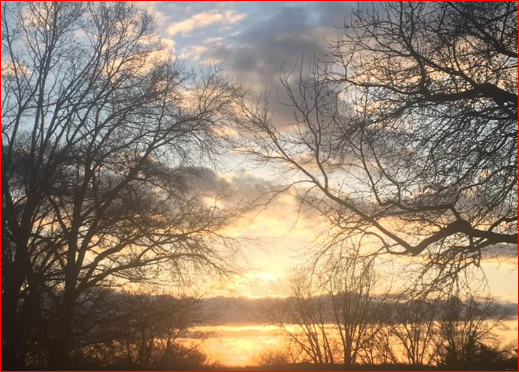